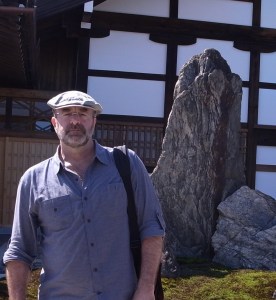 About Michael Pronko:
I have lived, taught and written in Tokyo for fifteen years. I work as a professor at Meiji Gakuin University teaching American literature, culture, film, music, and art. Fielding questions from my students about Jackson Pollock or Kurt Vonnegut and then wandering through Shinjuku’s neon mayhem always puts ideas for writing into my head. Teaching keeps me searching for the heart of life in the world’s biggest city.

I have written for many publications in Japan: The Japan Times for a dozen years, the once-great Tokyo Q, a learner-oriented weekly ST Shukan, Winds magazine, Jazz Colo[u]rs (in Italian!), and Artscape Japan. I have run my own website Jazz in Japan (jazzinjapan.com) for almost a decade. I also helped found Japan’s first bilingual jazz magazine, Jazznin and continue to publish academic articles and run a conference on teaching literature.

I was born in Kansas City, also a very different world from Tokyo. After traveling around the world and popping in and out of graduate school, I lived in Beijing, China for three years. Now, I live in Tokyo with my wife, Lisa Yinghong Li, who also teaches and writes.

What inspires you to write?
Living in Tokyo, pretty much everything inspires me to write. I see strange or confusing things every day. Like anyone, I notice things that aggravate me, confuse me, or amuse me greatly. When they do, I figure it’s an interesting topic. Small objects, little interactions, reactions, all of those inspire me to discover the meaning hidden inside what is often taken for granted. Almost anything can cough up meaning if you look at it long enough, or turn it around a few times. Once I find a small, interesting slice of life, all I do is open it up a bit to find its consequence and significance. In that sense, almost everything is inspiring. Basically, I’m still in awe of Tokyo, so it always inspires me.

Tell us about your writing process.
My writing process starts with paying attention. I observe Tokyo life as closely as I can, and think about what is in front of me, sitting in a bar, looking around on the train or walking through a crowd. You have to pay attention, which isn’t always easy. In Tokyo, paying attention is a challenge, since things zip by at a pretty fast clip. Tokyo is a high-energy place, with a lot of people and stuff going on, so you also have to ignore a lot of distractions. I always keep a notebook with me, and am unashamed to stop and write down whatever I notice anytime no matter where I am. That often embarrasses whomever I’m with, but if I don’t write it down when it strikes me, I’ll forget it. And worse, I’ll lose the energy of that a-ha moment. I sometimes keep a scrap of an idea for years, though, before I turn it into an essay. The words come when a connection is made, even if the connection is between two really different things, like vending machines and traditional tea ceremony, or windows in winter and entire lives. It can feel like a last, desperate act trying to piece together the meaning of something rather than letting it die in your mind without purpose. While writing, I let myself follow the thread of whatever pops into my head. There’s a lot of thinking, connecting and searching, flow in other words, that depends on my feeling, what music I play, and what other headaches are waiting for me outside my writing room. Most importantly, for every piece, I rewrite as much as possible. I can’t even count how many times, but a lot for even a short essay. Sorry, even more for a short essay. Rewriting is a way of thinking clearly with focus, so it’s painful, but fascinating, too, to see the shape of a piece emerge.

For Fiction Writers: Do you listen (or talk to) to your characters?
Even though my essays are non-fiction, I write in first person, so oddly, in a way, I am a character in my essays. That first-person character called “I” is very similar to who I am, but not me quite entirely, either. I don’t write the essays with fiction in mind, but there are elements of character always in there, I mean, myself in conflict with my setting, wondering about symbols, being a character. So I have to listen to myself living in Tokyo talking to myself writing about Tokyo, if that makes any sense.

What advice would you give other writers?
See what I wrote about my process above, but for years I took on basically any type of writing I could. That gave me a lot of stamina and experience, good and bad. It’s really important to read a lot about how to write. I still read a lot about writing. Keep good notes. Organize all your “stuff.” Learn to rewrite and rewrite. Learn to enjoy it, at some point in the process.

How did you decide how to publish your books?
I first published my books in Japanese. I didn’t have to do anything, a great editor wrote me a hand-written letter after reading my columns in Newsweek Japan. Japanese handwriting is sometimes hard to read, more so when it’s elegant. And polite Japanese can be tricky to decode. So, after finally figuring out what she was asking me, I knew the answer—yes! The publishers ended up publishing three collections of my essays. They were bought out by a bigger publisher, which took years to sort out. In the meantime, I wanted to publish the essays in English, but that publisher, Kadokawa, rarely published anything in English. So, I published them myself in the same shape, order and flow as the Japanese books. I added a glossary for people who might not know Japanese well, and glossed a few uniquely Japanese things. Otherwise, they are the same as the Japanese, though with a few additions to make the essays clearer to someone who has never been to Tokyo.

What do you think about the future of book publishing?
The future of book publishing is not in doubt. More books will be published, more great ones, and lots of interesting ones, and at a faster pace. It might become more digitalized, but there will be a reaction against that, too. People need books. Humanity needs books. Where else would creativity, new ideas, and what it means to be human be exchanged? If it’s an e-book or a paper book or some other form down the line, it’s still about us, we humans.

What genres do you write?: travel, essays, humor