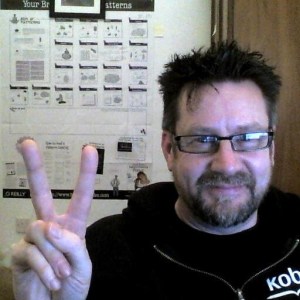 About Michael J Synnott:
Michael J Synnott grew up in the town of Wicklow, in Co. Wicklow; Ireland’s garden county. Before becoming a full-time author he was a software engineer, a touring rock musician, a voiceover artist, a radio presenter and a technical writer for computer industry magazines.
﻿
He lives on a farm in Ashford, Co Wicklow, Ireland with his wife Dee and their cat Mira.

What inspires you to write?
I live in the beautiful county of Wicklow in Ireland on a farm, 3km from the east coast, 10km from the mountains, 250km from the west coast and 250km from The Giant’s Causeway. Within 5km of my home there is a one-thousand-year-old ruined castle, a twelve-hundred-year-old, perfectly-preserved round tower, sea caves, abandoned lighthouses, a seventeen-hundred-year-old Ogham stone and all the folklore you could shake a stick at.

Tell us about your writing process.
I think you’re going to be disappointed and the purists will be horrified: I don’t have a process. I write when I feel like it – and that’s not necessarily all that often. Sorry. :-/

For Fiction Writers: Do you listen (or talk to) to your characters?
I listen to them. They write themselves. When I’m writing dialogue, I go into an almost fugue state and just transcribe what my characters are saying. It’s akin to automatic writing, I suppose and – you know – the dialogue very rarely needs any editing. Although my editor disagrees with me on that.

What advice would you give other writers?
* Don’t worry about writer’s block. If you’re not writing to a deadline, don’t write. If you are, don’t write. Screw the deadline. Or not. Either way, worrying about it is not going to help.
* If you *are* suffering from writer’s block and you speak a different language from the one you’re writing in (let’s assume for the purposes of this that your writing language is English), go and read something in that different language. Read it out loud. Rework it into English, NOT on paper – entirely in your head. Work it and rework it mentally until it’s first-draft quality. Then go and get drunk, or stoned, or have wild sex, or just go to bed – or all four. The next day, lo and behold, it won’t have made a blind bit of difference and you’ll still have writer’s block but at least you’ll have had a great evening drunk, or stoned, or in the saddle or had a good night’s sleep – or all four; and that’s got to count for something, right?
* Don’t be afraid of forgetting brilliant story ideas. If they’re truly brilliant, they’ll come back to you – most likely when you’re in the throes of writing something else – or having a bowel movement.
* Don’t sweat the petty things but, more importantly, don’t pet the sweaty things.

How did you decide how to publish your books?
Well, I was speaking with Stephen King one evening and he said to me, “Who the hell are you and what are you doing in my closet?” So after I was released and deported back to Ireland, I contacted a friend living in Colorado who was rubbing shoulders with novelists, screen-writers, agents, producers and a few decent, respectable folk too. I asked him to tout my second draft around and see if he could get me any advice on how to proceed. When he came back to me, the clear message was that the publishing industry is antsy and somewhat upside-down because of the self-publishing phenomenon. It’s hard to get a deal, and advances for new writers are minuscule so embrace the disruptor: self-publish and self-market. He told me about CreateSpace and that’s the way I went!

What do you think about the future of book publishing?
The same as I feel about the future of rock music publishing; it’s going to be entirely digital. I firmly believe that in my lifetime (or my expected lifetime now that I’ve stopped climbing into celebrities’ closets) bookstores will become specialist, artisan shops dealing in collectibles. Mass bundling of eBooks will become commonplace and the audio book will become increasingly prevalent. Innovative new angles on the reading experience, such as BookTrack (http://www.booktrack.com/), will also become popular. The clear winner, however, is going to be the eReader. That’s where the research and innovation is going to be focused.