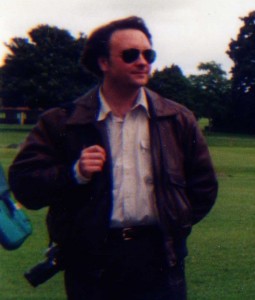 Author Bio:
Michael Haynes was born in 1966 in Plainfield, New Jersey, and raised in Warrenville in Somerset County. He has been a reporter for the Courier News of Bridgewater and the Somerset Messenger-Gazette of Somerville, and a contributing writer to the Carolina/Savannah Morning News of Bluffton, South Carolina. He is the winner of the Robert P. Kelly Award for Feature Writing from the New Jersey Press Association. He has been a volunteer for the Somerset County Parks Commission and the Great Swamp Folklore Project. His writings have appeared in the Catawba Art & Literary Journal, the USCB Literary Journal, Essence of Beaufort and Weird NJ. He lives in North Carolina with his wife and their Jersey wooly rabbit that thinks he’s Bigfoot.

What inspires you to write?
I write for the same reason that someone may run a marathon or climb a mountain — it’s a challenge to make myself better and more capable than I currently experience in everyday life. Plus, stories have a way of sticking in my brain and I won’t be satisfied until I can get them onto paper.

Tell us about your writing process.
Since I write about folktales, I rarely encounter a story in its entirety from one source; they are generally fragmented and spread across a wide array of books and people, so outlining is essential to keeping a tale cohesive. It’s a process I took to heart while being a reporter because stories have to backed-up by multiple sources. One time, I was in the home of the late author Willie Morris, and in his dining room he had spread hundreds of index cards with phrases written on them all over the table and onto the floor. He told me this was how he wrote his books. My process isn’t as elaborate; if I can scribble a simple 1-2-3-outline on the back of a grocery receipt that seems to be enough to keep the story straight in my head and on paper. I think that also compels me to sit down, really think about the story I want to write, and then do the actual job of writing it. Like a lot of writers, I too suffer from procrastination and need a kick in the pants to finish the job. Outlining, for me, is an effective boot to that end.

What advice would you give other writers?
Be true to the story and yourself. If you’re not, people will see right through your dishonesty and your stories will be in vain.

How did you decide how to publish your books?
I was writing my stories for the greatest folklore magazine ever, Weird NJ, but I had started to write more stories than I knew they could publish, so I decided to take the chance and see if they could be compiled into a book. To be honest, I wasn’t looking forward to it; I’d tried several times in the past to have books published and all those instances were very disappointing. However, the path to getting Legends & Lore of Somerset County published was unlike any experience I previously had. The History Press was the first house I submitted the stories to and, from the start, I knew I was working with dedicated professionals who believed in the book as much as I did. In fact, queries to other publishers were shot back to me with messages like “Server not found,” or “No known address;” perhaps the spirits I wrote about decided The History Press was the place to go. My Commissioning Editor, Whitney Landis, and my Production Editor, Julia Turner, are two of the best people with whom I have ever worked. They took me through the publishing process and never waivered in their belief in the book. I only hope that future endeavors can be as rewarding as this one was.

What do you think about the future of book publishing?
From what I can tell, I think the future of book publishing can only continue to grow. It’s likely that more books will appear only in eletronic form in the future, and that’s something I don’t have a problem with. I’m sure there was a bunch of monks in the 15th Century who didn’t like the coming of the printing press, either, but the press enabled the growth of civilization and that’s how I view the e-book also.

What genres do you write?
History, folklore