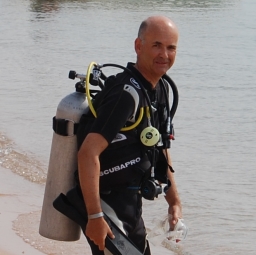 Author Bio:
I left school at seventeen and then trained as an engineer. After working in design I spent years travelling all over the world hopelessly trying to install electronic systems and fix them. Eventually I settled down to a ‘proper’ job in an office and learnt how to use a computer. I hold a Master of Arts Degree in humanities from Westminster University in London and I’m also a graduate in computing.

My first novel ‘Riga 123’ was lost forever when my computer’s hard drive suddenly decided to pack up before I’d backed up my work properly. The second novel ‘Clothing Optional’ (about the owners of a struggling hotel who make their swimming pool available to naturists)was published in early 2013. Although it wasn’t aimed specifically at naturists/nudists it gained some exposure within the naturist community, particularly in the UK and USA.

My third book ‘Over Exposed’ (police hunting a random ‘flasher’ suspect the members of a naturist club of involvement and hopelessly try to track down the culprit) was originally published under a different title but was withdrawn as it had distinctly undesirable connotations in some countries. Such are the joys of globalisation. My latest novel ‘Nine Years Naked’ was released in June 2014 and within a few days had reached #5 in adult humor on Amazon Australia.

I’m married and live in a beautiful part of rural East Anglia, north-east of London.

What inspires you to write?
Perhaps rather strangely I find writing to be very relaxing, particularly when I’m on holiday. Both ‘Over Exposed’ and ‘Nine Years Naked’ were written while I was taking a break on the Red Sea coast in n Egypt – that’s perhaps slightly ironic given that Egypt is a Muslim country. I can’t just sit and do nothing if my mind’s active, so when I’m recovering from a trip on the coral reef I like to work some ideas around in my head to see if they’ll gel into a story.

Tell us about your writing process.
I’m both a seat of pants writer (Clothing Optional) and an outliner (‘Over Exposed’ and ‘Nine Years Naked’). I just take an A5 ring-bound notebook and write down a series of scenes I want to turn into the final book. Then I flesh out the scenes, decide what traits the characters are going to have and expand the work line by line. When I get home I type the manuscript up and re-read it and tweak it about ten times.

For Fiction Writers: Do you listen (or talk to) to your characters?
I talk to the characters in my mind to see how they’ll react, and what they’ll say. If I’ve got the characters the way I want them they’ll each have a different reaction. And of course I listen to them as well.

What advice would you give other writers?
Do it because you enjoy it. There are millions of Indie writers out there, so if you ever sell 1000 books you’ve done pretty well! Unless you’ve got a publisher (and you probably aren’t going to get one) writing the book is the easy part. The other critical point is to know who you are aiming your book at. It could be brilliant, but unless you’ve got a market to sell to only your Mom and your buddies are going to be interested.

How did you decide how to publish your books?
Publishers aren’t interested unless you’re established. I sent ‘Riga 123’ out to a load of publishers and heard nothing from any of them, not even an acknowledgement (this was twenty plus years ago). Perhaps it’s different now. When self-publishing on the Internet became available that seemed the common sense – and low risk – way to try and do it myself. I knew I had a subject that opened up some possibilities so I decided to try self publishing to see what would happen and if my books would sell.

What do you think about the future of book publishing?
It’s exciting, but there’s absolutely no quality control. Amazon has over 1.8 million titles on its e-book shelves, so how on earth are customers going to find your book?

What genres do you write?
Humor