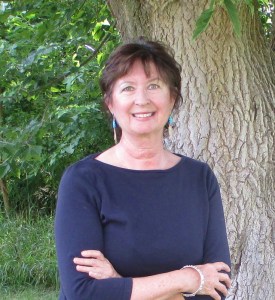 About Mary T. Wagner:
Mary T. Wagner is a former newspaper and magazine journalist who changed careers at forty by going to law school and becoming a criminal prosecutor. However, she never could step away from the written word entirely, and inevitably the joy of writing drew her back to the keyboard. A Chicago native, this mother of four and recent new grandmother now lives in rural Wisconsin, where she draws much inspiration for writing from daily walks in the countryside with her dog, Lucky, and the cat who thinks he’s a dog…The Meatball. Wagner’s ongoing legal experience has ranged from handling speeding tickets to arguing and winning several cases before the Wisconsin Supreme Court…sometimes in the same week!

Her first three essay collections–Running with Stilettos, Heck on Heels, and Fabulous in Flats–have garnered numerous national and regional awards, including a Gold E-Lit Book Award, an Indie Excellence Award, and “Published Book of the Year” by the Florida Writers Association. Now her latest book, “When the Shoe Fits…Essays of Love, Life and Second Chances” rounds up her favorites–and reader favorites–into a “best of” collection now available on Amazon in paperback and ebook formats. Wagner’s life experiences includes the defining watershed of motherhood, and stints as a girl scout troop leader, truck stop waitress, office temp, judicial clerk, and radio talk show host. She counts both wearing spike heels and learning to use a cordless drill and chainsaw among her “late blooming” discoveries, and would be hard pressed to surrender either her favorite stilettos or her power tools.

What inspires you to write?
I don’t know that I’m so much “inspired” to write as that I am absolutely “driven” to do it. It has been part of my makeup for so long that if I can’t sit down once in a while and let the words come out on to paper or a screen, I feel like the top of my head may come clean off! There are times I write because it’s what gets me through some horrific channels, such as the illness and death of a parent. Then there are others where silliness takes hold in the form of writing about shoes, or chocolate, or the fact that particular plants have overtaken my garden and I am engaged in a strange form of combat to rein them in. And then there is the vast middle, where I try to put into words experiences I have but also feel that others are going through as well–changing careers, raising children, trying new things, learning about self-reliance, and the importance of power tools.

Tell us about your writing process.
I am utterly a “seat of the pants” writer. My first professional writing experience was as a newspaper reporter back in the day before cell phones existed, and finding a pay phone was a necessary step to phoning in a story before deadline. So I learned to put words together quickly, under circumstances that could mildly be called “chaotic”! When I sit down to write, I rarely have a structure in mind. Rather, it’s more of an idea that emerges as the words flow out and more follow suit. And then I’ll sit back and figure out whether I need to move some things around or to add some things in.

What advice would you give other writers?
Write what you love. Write from your heart. And write to please yourself first. If you aren’t true to your own voice, why should anyone else listen?

How did you decide how to publish your books?
I had started out with a collection of essays from my first blog, “Running with Stilettos,” and quickly found that while editors and agents had encouraging words to say about the submission…they felt they couldn’t sell this kind of a book by an unknown author. Then when I looked at the amount of time that would go by between acceptance by a traditional publisher and actually seeing my book in hand in printed form, I chucked the idea entirely and forged ahead on my own. I’ve never regretted it, and have had some truly amazing experiences as a result.

What do you think about the future of book publishing?
I am completely agog at the fluid nature of how the industry is changing. I wouldn’t begin to predict what’s going to happen next!

What genres do you write?: Memoir, essays, literature, inspiration