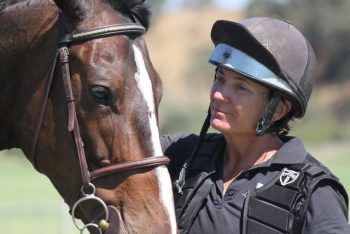 About Marla A. White:
Marla White is a story analysis instructor at UCLA and writing coach who lives in Los Angeles. She graduated from the University of Kentucky where she took her first horseback riding lesson. After dabbling in hunters, barrel racing, and weekly trail rides, she fell hopelessly in love with the sport of eventing. She conquered Novice level before taking a break to pursue novel writing but hopes to return to the saddle someday soon. Her first novel, “The Starlight Mint Surprise Murder,” was published in 2021 followed by the first two books in her Keeper Chronicles series. When she’s not writing, she’s out in the garden, hiking, baking, or putting together impossibly difficult puzzles.

What inspires you to write?
Growing up as the youngest of six, I was lucky enough to have a full library of books at home that were discarded by my siblings. I loved disappearing into places and meeting new people through those magical places. It was also a good excuse to get out of doing chores!

When I was in junior high, my history teacher gave us the assignment to write a bio of a person in any part of history. That was my first foray into fiction and I loved it. Plus I got an exuberant "A +++" on my paper which taught me that writing is super easy and a way to get instant gratification, right?

Now that I'm hooked, I'm mostly inspired by the places I visit or people I know. My Keeper Chronicles were inspired by the beauty and mystery of California's Mission Inn. The jumping-off point (pun intended) for my book, "Cause for Elimination," was the time I spent in the equestrian eventing world. My novella "The Starlight Mint Surprise Murder" was inspired by many trips to beautiful Idyllwild and my utter failure at baking the titular cookies.

What authors do you read when you aren’t writing?
Such a long list! As a kid, anything Walter Farley wrote since I was a horse nut. From there, looking for action and charm I fell in love with Leslie Charteris' "Saint" books. Robert Parker won me over when I discovered how much better his books were than the show, "Spenser For Hire". And of course, the legendary Dick Francis.

My urban fantasy go-to writers are Jim Butcher, Seanan McGuire, the team that is Ilona Andrews, and Neil Gaiman.

Plus my good friend and paranormal romance author CJ Bahr!

Tell us about your writing process.
I'm definitely an outliner but am open to pantsing it when a character demands it. In "Cause for Elimination," my Scottish rider was meant to be in it for a scene or two, but kept loudly insisting he deserved a bigger role!

I'm not a gadget person so I write using good old Word. Occasionally I'll scribble out a visual sort-of Venn diagram to see if characters are interacting enough. Coming from a TV background, I will sometimes color code characters or storylines to make sure I haven't lost track of anyone. I'm thinking of going all out index-cards-on-the-wall for the next book, but mine aren't George RR complicated so I haven't needed to do that yet!

I create character sketches after I start writing. When I first start thinking about a story, I might have one or two actual people in mind and fill the rest in later. For instance, if you're a fan Doctor Who when you read "The Angel by The Tower" it's not accidental that Gabriel might remind you of the 10th Doctor.

Once I start rolling along and characters form in my head, I write down things like eye color, hair color, and height to be sure I stay consistent. Their looks are less ingrained in my head than their actions. Gabriel always rushes in first and asks questions later, so I don't need to write that down.

For Fiction Writers: Do you listen (or talk to) to your characters?
I know it sounds crazy, but I absolutely have conversations with my characters. Mainly in my head, out loud would make me look nuts!

Maybe it's less about talking with them than it is listening to them as I write. Frequently, a character will do something I didn't plan on, they just insisted.

What advice would you give other writers?
Honestly, for me, writing is the easy part. Don't get me wrong, I have to go through revision after revision to take away repetitive or passive words, and I'll be damned if I'll ever get which side of the quotes the comma goes, but the stories themselves can be coaxed out easily enough. Sometimes it takes a cocktail or two but….

My best advice is to be prepared for the business part of writing. It is VERY hard to make a living doing this, at least I've yet to crack that nut. Educate yourself about marketing and be prepared to invest in yourself.

Also, and I'm not kidding, don't quit your day job until you have at least four books out there doing well. If you want it bad enough, you'll find the time to write and I mean EVERY DAY, even if it's only a paragraph.

How did you decide how to publish your books?
It's funny, I'd written all three Keeper Chronicle books as well as "Cause for Elimination" tucked away safely in my computer files for YEARS where no one could hurt them. I'd give them to friends to read but never took them out to agents or publishers.

Then a friend sent me a notice that The Wild Rose Press had an open submission for books of any genre centered around a holiday cookie. I do NaNoWriMo every year (oh yeah, there's some advice – do that!) so I figured what the heck, I'd give it a try. I finished it, sent it in (way beyond the deadline because who reads ALL the words in an announcement?), and got the email on April 1st that they wanted to contract the book. My editor opened the door to reading anything else so I sent her "Cause for Elimination".

However, with encouragement from a friend who tackled all the tech stuff, I decided to self-publish The Keeper Chronicles just so all my eggs weren't in one basket. It was her encouragement combined with the stamp of approval from The Wild Rose Press that somebody who didn't know me liked my writing that made me make that final move.

I would advise new writers to be open to non-traditional routes like smaller presses. The Wild Rose Press has won for best publisher and I love working with them, but there are other presses out there.

DEFINITELY get help! I'm terrible with tech and would have given up trying to self-publish. I got editorial help from Brenda Whiteside to make my writing stronger.

What do you think about the future of book publishing?
Definitely print books are on the wane, which makes me a little sad as I love the feel of an actual book in my hands. However, the planet doesn't need more paper being made or thrown away, does it?

That said, e-books are pretty easy to self-publish. If you have a story to tell, there's very little standing in your way.

However, more competition means it's even tougher to find your audience.

I just recently started reading and learning more about keywords and phrases as a way to research your book's potential before you write. That's probably the smart thing to do, but it would make me sad if I'd researched and found that nobody buys angel books. My life without Gabriel, Michael, and Lucifer would be a lot less interesting! And nobody buys a book about an astronaut turning poop into potatoes until they do, right?

What genres do you write?: mystery, urban fantasy

Website(s)
Link To Marla A. White Page On Amazon