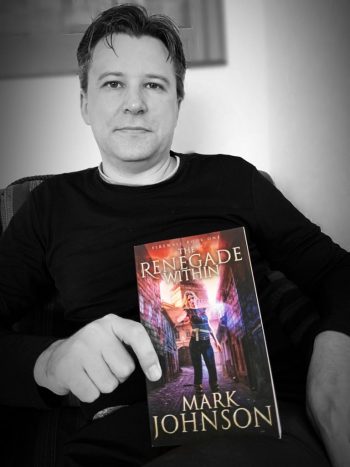 About Mark Johnson:
Mark was born in Auckland, New Zealand in 1977. He attended university in the USA, lived there, then returned and worked as a high school teacher before getting into writing and publishing. He chose fantasy because it’s the best way of telling the truth, without telling the truth. He’s fascinated by old things and forgotten myths.

Mark lives in Auckland with his coffee machine, his wife and two children.

Read on or listen to the text instead:

What inspires you to write?
I have always wanted to write about the idea of older cultures that still influence ours, without our direct knowledge. The myths of ancient secrets that have been forgotten and are still relevant. Another interest that keeps me up at night is the question of; What are the upper limits of humanity, and what are we capable of at our greatest potential?

What authors do you read when you aren’t writing?
My inspiration is Robert Jordan. The writers I devour at the moment are Adrian Tchaikovsky, Brian McClellan and David Estes.

Tell us about your writing process.
I do admin in the morning (for instance, this interview), exercise, research or odd jobs. (Whenever we're in lockdown, I'm on kid duty all morning). After lunch I write and plot. Sometimes at the same time.

I'm more of a pantser than a plotter. I have a general theme, character arc and ending (for the series, book or act) and attempt to build toward that. Sometimes the words fly off the page at a rate of 3K words per evening, and sometimes all I've accomplished is creating a dent in my forehead from banging on my desk.

I write with just simple, plain Microsoft Word and a series of bullet points that I hope pull together into a story. It doesn't always happen.

For Fiction Writers: Do you listen (or talk to) to your characters?
I often ask them why they're doing what they're doing, and ask them how they're supposed to get out of their current situation. I usually get a raised middle-finger and a smirk in response. "Figure it out yourself, dork."

What advice would you give other writers?
Write what you feel like by all means, but go out and get life experience first. Good bosses, bad bosses, joy, grief, frustration and success. Make mistakes.

How did you decide how to publish your books?
Self-publishing. I'd worked at a publishing collective for a while and it was a classic case of Too Many Cooks and divergent visions. Good experience, but I knew what was right for me, so I left to do my own thing.

What do you think about the future of book publishing?
Children's and Non-fiction have a bright future ahead of them. Fiction has been trapped and addled by a faltering establishment, and there's a whole lot more disruption coming Mainstream's way. I think the future of publishing is more Amazon capture and innovation, especially with Kindle Unlimited.

What genres do you write?: Epic Fantasy