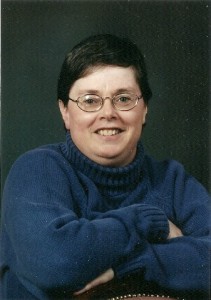 About M.M. Justus:
My first visit to Yellowstone National Park was at age four. I’m told it snowed on us on the Fourth of July while we were there. I spent most of my childhood summers in the back seat of a car, traveling with my parents to almost every national park west of the Mississippi and a great many places in between.

I have a bachelor’s degree in British and American literature and
history, a master’s degree in library science, and a certificate
in museum studies. I was a reference librarian, aka a professional dilettante, for sixteen years. I have also worked as an independent museum curator and exhibit designer.

Other things I love include quilting, gardening, meteorology, and the travel bug I inherited from my father, including multiple trips back to my favorite Grand Geyser and the rest of Yellowstone. I live on the rainy side of the Cascade mountains within easy reach of my other favorite national park, Mt. Rainier.

What inspires you to write?
I am the only person I know who took one look at an erupting geyser and thought, wow, wouldn’t that make a terrific time travel device. I’ve also gotten ideas from roadside historical markers and store windows — the store window in question was in a ghost town, and its contents consisted of a woman’s dressmaker form and a plaster pig. That pig became a character in my current series of supernatural novels.

I do character questionnaires as well, so I know who I’m dealing with, and I also do a lot of research for setting and history (most of my books have real historical events in them) both before and during the writing of the book. I also visit the settings when possible, and take lots of photographs, some of which I post on my website (http://mmjustus.com).

For Fiction Writers: Do you listen (or talk to) to your characters?
I basically take dictation when I’m writing. I put myself in the character’s head, and I write either first person or tight third person, depending on the character’s preference.

I started out writing my first published novel in third person, and it was horribly stilted, as well as the words being as hard to pull as teeth. In desperation, I went back and started over again in first person, and it was like turning on a fire hose. As it turned out two books later, there was a good reason for my hero to be telling his story in first person, so I’ve learned to listen and pay attention to my characters’ preferences in that and in other things.

What advice would you give other writers?
This is a business. If you’re not willing to pay as much attention to the business of writing as you are to the actual writing, you’ll be disappointed in how things turn out.

How did you decide how to publish your books?
I started out trying to get noticed by an agent or a publisher. I won and placed in contests, and I kept getting rejection letters that said things like, “I really like this, but I can’t sell it.” This went on for years.

About six years ago the idea of self-publishing that wasn’t vanity publishing showed up on my radar and I thought, well, if they can’t sell it, I will. So I started learning how to publish my own books, and I haven’t looked back.

What do you think about the future of book publishing?
I think it’s fragmenting, the way a lot of other creative businesses are, and I think that’s an excellent thing. The more niches the merrier.