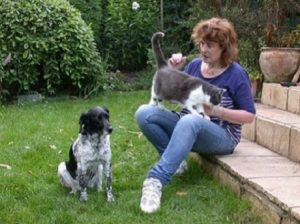 About Lucinda Hare:
I live just south of Edinburgh with a badly-behaved pack of nine cats, four dogs and two rabbits whose feisty characters inspire my dragons. (four distressed hoglets arrived in July this year at the height of the heatwave now resident in the rabbit garden, and, yes there are going to be spined dragons). Run-away battery hens have also been given a home. They are all adopted, and many are blind or have special needs, are grumpy and ungrateful! Ten years ago, following trips to Russia and Ukraine, I created an Eastern European street animal rescue called Ruff Beginnings which has now extended to Egypt. I experimented with many different jobs throughout my career, but found writing about animals, in particular the large scaled flying variety with lethal talons, teeth and tails ~ far more fun. Which is very fortunate indeed as a motorcycle crash 30 years ago gradually lead to chronic daily migraine and I eventually had to give up my career and travel around 12 years ago; but it opened the door to the magic of imagination and writing. My first book The Dragon Whisperer published in 2009 was described as "One of the most captivating new books to be published for 8+ for some time . . . It made me laugh, cry and remember exactly what's so special about the time when you or your child live in hope of finding a dragon of your own" (Amanda Craig The Sunday Times) My books are written for all the family from aged 8 years to 108 years young, not just for young children, so that reading can be a wonderful shared experience. I began writing again last year after a three-year battle with cancer and have brought out a second edition of books one and two with new artwork this year. I have welcomed many readers to dragon drawing sessions at my home including autistic children who relate so readily to dragons and the rescued animals who inspire them.

What inspires you to write?
Wildlife from earwigs to elephants and my rescued animals inspire my writing. They are my passion and I wanted to give them a voice so that readers can come to know their unconditional love and loyalty, their empathy and their ability to heal, but also their ability to suffer by our deliberate cruelty, neglect and lack of compassion. Native American’s culture has inspired me since childhood; and I have drawn upon their animal and bird totems, naming ceremonies and moons, and their culture’s affinity with and respect for mother earth and all her myriad creatures.

Tell us about your writing process.
Chaotic! Mayhem! I don't know where my story is going until I write it. I have ideas and then I try and link them together to write the next chapter of my dragon’s and character’s lives. I use liquid chalk on the conservatory windows, (and school windows) which can be changed as frequently as my mind and I also put my dragons up to help me visualise when i am writing. I would be lost without my laptop, because I chop and change descriptions, move chapters about, draw fresh inspiration all the time which changes the story arc, link ideas and threads only to unravel them, and this would be impossible to do with a pen and paper! I don’t bother about sentence structure or spelling at this stage, I just get down ideas before I forget them. My imagination thrives at the heart of chaos where rules and regulations or constraints of any kind are chucked out the window. There are pads and pencils all over the house and in the car, and random art on windows and scraps of paper everywhere. My creative cats then join the fun and sit on the laptop deleting a day’s work (yes, I know ~ should be backing up all the time!) or pounce on sheets of paper and shred them! I also draw on music which makes my story sing in my head and I can choreograph flying and battle scenes. What kind of music? Hans Zimmer, Game of Thrones. (I saw the awesome GoT concert experience that brings the books alive) and Two Steps from Hell to name a few.

For Fiction Writers: Do you listen (or talk to) to your characters?
I relate to my characters through illustration. I'm not sure which comes first, the writing or the illustrations, but I grew up drawing and illustrating books I loved, such as Lord of the Rings & Imperial Governor. Although it was such a long time since my childhood, I found I could pick up illustration where I left off so many years ago whilst bringing new ideas and experience to my artwork. Artwork led to an explosion of ideas then the stories followed as dragons and sorcerers, dwarves and gnomes took shape with pastels and paper…

What advice would you give other writers?
Finding your own way from scratch is tough. I think finding a mentor is the best thing you can do because it takes years to learn the hard way how the system works, what options are open to you, which book promotion sites are good and bad, how Neilsen's database and ISNBs work, good synopsis, traditional publisher versus hybrid…all the do's and don'ts. Find a mentor, you'll learn more in a week than a year on your own.

How did you decide how to publish your books?
From the onset I wanted a traditional publisher because I hadn't a clue how publishing worked, and I began writing when the book industry was experiencing a challenging time with Borders Books UK going bust followed by countless independent shops. After the usual bucket load of rejections (Until his first book appeared, Iain Banks plastered the walls of his room with rejection slips) I got signed up by Random House Children's Books for a two-book deal. Yippee you cry. Unfortunately, being signed up by one of the Big Five doesn't automatically mean you or your nascent career will be nurtured; a publisher’s turnover of staff can turn things on their head and they did for me before book one was even published. That led to three increasingly frustrating years before I took the plunge with book three and became a publisher as well as an author. There are pros and cons for both, but I would love it if a traditional publisher would give me and Two Gulps Too Many a home because I want to focus on writing and illustration, and not editing, formatting, marketing and distribution. I want to practice my craft and get better and better at it, not get bogged down in tweets and blogs. Even the best of authors need great editors and imaginative cover designers not to mention publicists who know where your book will fit in the market. I am none of these things and don't want to be. I want to be the author on your 'Dear Santa' list this Christmas. That is who I want to be!

What do you think about the future of book publishing?
I would like to see the return of of author publishers supported by sponsors willing to take risks. As Iain Banks said in an article lamenting the risk averse traditional publishing industry, 'Its become more corporate, less fun for all concerned' dominated by 'back room accountants' and publishers more likely to stick with tried and tested authors than to take risks. That is not healthy for anyone and everyone involved in the publishing industry surely? Mankind is at his most creative in a changing and challenging world, not one stuck in the past.

What genres do you write?: Fantasy & Cosy for all ages