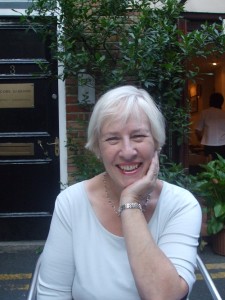 Author Bio:
I am an Anglo-Greek, born in Cairo, Egypt a long time ago! My first sight of Britain was snow; I’ll never forgot how cold it was! I started writing as a teenager, wrote some novels in the 1970’s, but family and work took over so it wasn’t until I retired with my husband to Malvern that I began serious writing and have since published four novels. My first book, The Long Shadow, is currently being translated into Greek and will be published by Oceanida in Autumn 2014. They may also take Dying Phoenix which is the sequel and has just been published in English. I also love writing poetry and am thrilled to claim a distant relationship with the Victorian poet Elizabeth Barrett Browning.

What inspires you to write?
Nature is a great inspiration. But so is art, other great classic novels and simply snatches of conversation on the Underground. I was inspired to write The Crimson Bed by reading Sarah Waters book Fingersmith. Then I saw a wonderful piano decorated by Edward Burne Jones, the Pre-Raphaelite painter, and that set me off on the Victorain theme about artists of that era. The Long Shadow and its sequel, Dying Phoenix, rose from my own half Greek personality and a need to fins resolution of this duality in my soul. Middle watch was inspired by a conversation with a friend over coffee whose life had at least a hundred stories in it!

Tell us about your writing process.
Ideas come for a storyline but they have to mean something to me, have to appeal to my heart or I can’t write. That’s why I’ll never be able to do series about the same character. i like diversity. And so i start a stroy and let it flow from the unconscious where all these characters seemed to be living a life of their own. And they come along and tell me their story. it’s so much more interesting than working it all out. Anyway, even if I try that, things come up and it all goes off on another tangent. But yes, I do have some sort of an idea, a notion how it will all go. And, I admit, this way of writing doesn’t always work!

For Fiction Writers: Do you listen (or talk to) to your characters?
As described above, I let them come along and tell their story. It’s easier that way because they know what they’re up to and I don’t!

What advice would you give other writers?
Write from the heart and write to please yourself. The best stories were written from the author’s deep convictions. Good literature should be one’s guide. Is it really all about making money? or is it a creative and joyful thing to do to satisfy oneself? Books are food for the mind and bad writing and subject matter is like eating junk food. Why force feed others that way?

How did you decide how to publish your books?
Well, once a book is written you want someone to read it for sure. I especially wanted my Greek mother to see The Long Shadow published so hastily found a publisher and at least she was able to read it and enjoy it and was so proud. But the publisher was not so good for me as they were based in the US and shipping the books over cost me a lot. They sold some but did little marketing and bound me to a seven year contract. Now the book is mine again, I self published with matador who are marvellous and market the books and are so helpful. It’s gone from strength to strength and is now to be published in Greece while LittleBrown are looking for some more foreign right for me. However, it’s true that Kindle books are the way to go if you want to make a bit of money and can’t afford to self publish but it’s hard work marketing…very time consuming.

What do you think about the future of book publishing?
It’s seems sadly that print books will become rarer and electronic devices take over. This has the effect of making books feel unreal, unsubstantial and ephemeral. A book with a cover, a feel to it, on the shelf to be re read and looked at again and again is the best thing for those who truly love books and literature. Hopefully that will never go but in the main most books will be like newspapers, put aside and easily forgotten.

What genres do you write?
Historial, Romance, Saga, Literary Fiction