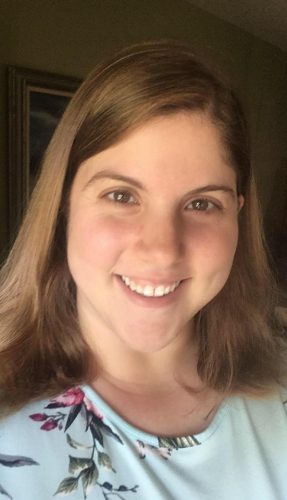 About Leslie Conzatti:
I'm an avid writer and prolific reader living in the Pacific Northwest. I've been running a blog since 2013 called The Upstream Writer. I started publishing with one re-telling novella back in 2016, and I've had a handful of short stories published in anthologies since then. Most recently, I changed up a few things in my novella–a re-telling of The Little Mermaid–and re-released it as the first in a whole series of fairy tale re-tellings. My "day job" is working as a staff assistant at an elementary school, and I find it absolutely delightful to help nurture and educate young children, to encourage a love for books, and support their blossoming imaginations!

What inspires you to write?
I have always had a rapid-fire imagination. It's what drew me to fantasy–the passion for telling a story, for sharing my thoughts with the world and panting new and inventive pictures with my words. I'm a firm believer in the idea that what someone reads has a profound impact on the way they think, and it's my goal to be a positive influence on anyone who reads my books. I like to find new and creative ways to communicate different perspectives, and if I can encourage people to see things from a unique point of view, to stretch their thinking and connect to the world around them with an uplifting worldview, so much the better!

What authors do you read when you aren’t writing?
There are a few authors that I intentionally look for when I visit the library, because I know their books are good and I want to make sure I've read them all: Mark Lawrence, Cornelia Funke, Naomi Novik, Jim Butcher, Anthony Horowitz, Carole and John Barrowman, Marissa Meyer, and David Baldacci, to name a few! But also, being a book blogger and featuring indie authors on my blog, I've encountered many independently-published authors that I'll willingly read absolutely anything they write! Authors like Kelly Blanchard, J. D. Cunegan, Jeffrey Cook, Amy Hopkins, R. R. Virdi, Pauline Creeden, Kimberly Rogers, Patricia Loofbourrow, The Writerpunk Press Group, Lisa Rae Morris, and Nils Visser come immediately to mind!

I have a lot of favorite authors because I read a whole lot! There are only a few genres that I won't actually read–mostly romance and horror genres. But the rest are fair game!

Tell us about your writing process.
My ideas always start with at least one scene, or even just a single phrase, and I write it down. It's a challenge for a character, or an end-goal that they have to meet–or it's just a strange theory that I want to "test out" and see if it works as a premise for a whole plot. I note pretty meticulously, making up as much as possible as I go along, and going back and altering things if I reach a new idea that needs to be introduced earlier in the plot. Once I have figured out the major "beats" of the story, and it all functions well together, I make my chapter outlines, deciding how much of a scene or which scenes belong together, and where the transitions from one chapter to the next should happen. I generally keep all my notes in a big long list on a note in my mobile device, or type them out in a document on a computer. I then use a fresh document to start writing the project. I'm definitely a planner from the outset, but I'm pretty flexible with the "plan." Mostly I just don't want to forget anything from my initial idea, in case I end up using it. Sometimes, it happens that the characters have a conversation, or I come up with a new plot twist that necessarily changes something later on in the outline, so I merely make some notes to refer back to the new part, and move on. The notes, for me, are more of a guideline, to ensure that I'm "on track" and the story is going to make it to the ending, although that ending might look a little different than the first thing I write down.

For Fiction Writers: Do you listen (or talk to) to your characters?
I sometimes talk to them, but most of the time, I envision my characters as interacting with each other, in the context of the story, and I'm an omniscient, third-party viewer. The "fourth wall" isn't broken by much. When they do talk in my imagination, I can hear each distinct voice and clearly picture the kind of person saying it, and the longer I just let it go, the more it repeats over and over again, and sometimes the words get jumbled and lost, so whenever I'm picturing a scene, I want to get it written down as soon as possible, so I don't forget anything!

What advice would you give other writers?
The biggest piece of advice I give out has to do with a quote I read a while ago: "Books are like breathing. Reading is breathing in, and writing is breathing out." This speaks volumes to the balance between reading and writing, that I've found to be true in my life. If I start getting burned out in my writing, it's because I haven't done enough reading, and I find that taking a break from writing to read books, no matter what genre, always seems to rejuvenate my capacity to write. Conversely, the more I read, the more I feel kind of "stuffed up" with words, for which the only release is writing them out.
Some writers are afraid that if they read too much in their genre, their own writing will start sounding too much like the books they're reading, and they're afraid of "copycat" accusations. The problem with this is twofold: first, the writer tends to avoid reading altogether, choosing to rely on "their own voice" to get the story across; second, the resulting story feels stilted and disconnected to the reader, as if the writer has lost touch with the art of storytelling altogether.
To those writers, I say that the solution is simple: if you're afraid of sounding too much like one author or another, then diversify your reading habits! Don't avoid reading in the genre you write in–just read other genres as well! That way, even if you do pick up a quirk or two, your "style" becomes a combination of all these multiple "voices", and the more you keep reading and writing, the more that "voice" will coalesce into a unique hybrid of everything, and become your own "writing voice."

How did you decide how to publish your books?
For the longest time, I only posted stories on my blog. I was really nervous about doing the "right thing" with publishing, and I didn't want to make the "wrong choice" and end up messing something up! Then one of the writer's groups I was in decided to do a group anthology featuring fairy-tale re-tellings from each of us. One of the group even had his own small-press publishing business, so he offered to produce the anthology. As time went on, different members had to drop out for one reason or another, until the final deadline came, and I was the only one who was still able to make it, everything told. So he offered to just publish my story, titled "Princess of Undersea" as a stand-alone, and I went for it! My publishing experience was such a positive one, with the publisher covering all the technical stuff, and letting me know where edits needed to be made, and helping me with cover design and everything. It was a great first-time experience, and it boosted my confidence such that I kept writing, including other re-tellings in my repertoire, and whenever an anthology submission opportunity came up, I found a story that I had already written, so all I would have to do is edit it according to the submission guidelines, and I could have more things published! Four years after that first publishing experience, I decided that instead of leaving it as a stand-alone, I wanted to turn "Princess of Undersea" into a whole series of re-tellings, and since it had been so long, the publisher from four years ago recommended self-publishing it. I hired a formatter, commissioned some cover artwork, and used Kindle Direct Publishing, since that seemed like the easiest route. As a matter of fact, it was so easy, and once I had the finished files back from the formatter, everything came together much faster than I thought it would–and just like that, I started a new chapter as a self-published author!

What do you think about the future of book publishing?
It is my passion and goal to see good and worthwhile independent authors end up on library shelves and as widely-read as the traditionally-published authors. I envision a future in which books are appreciated for the quality of their content, not just because they were represented and published by a huge, world-famous company. Amazon has made it really easy to get into their system, but in order to "make it" into the wider brick-and-mortar network requires taking a cut in royalties, which requires more sales from an independently-published author trying to produce quality literature to be enjoyed by many, and to get those sales requires a lot of leg-work from the author themselves. Even now, I'm finding that even though I did a lot of preliminary leg-work set up ahead of time that I didn't before, I'm still having about as much success today as I did four years ago–with the exception of filling out many more interviews like this one. I appreciate this as a marketing opportunity, but what I really want is for readers to read and enjoy my book, and other books like it from independent authors just like me!

What genres do you write?: Fantasy, Fairy Tale, Folklore