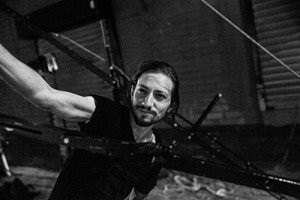 About Lee Isserow:
Lee Isserow is an award-winning screenwriter and filmmaker, with over fifteen years spent trawling the back streets and dark alleys of the ‘entertainment’ industry.

He’s pretty sure he has some traits of autism, because he’s been constantly working and obscenely prolific for the entire duration, writing over a hundred screenplays and TV pilots, which he’s adapting into forthcoming books, because these days very few people are willing to turn throw money at him to put his work on screens.

He lives in Liverpool, England because he accidentally bought a house there. He’s not quite sure how that happened – but assumes part of that is because he used to drink a lot.

What inspires you to write?
I’ve always read and I’ve always written. Reading inspires writing (mostly due to envy at an author’s prose) and writing inspires reading (that constant “somebody must have written this already, and better” feeling).
Although the majority of my writing has been punching up TV and movie projects, I try not to let myself be inspired by screens, unless I’m shooting something, in which case I’ll devour various cinematographers’ work until their framing and lighting are etched into my mind.
So, to surmise, I read a lot, and that ignites the desire to put pen to paper.

Tell us about your writing process.
For screenplays I always outlined – mostly because that’s what the production companies who hired me wanted me to do.
Personally I like to let a story play out organically. My first drafts are always handwritten and shorthand, moments and sections of dialogues or scenes that I fall in love with are written longhand, and then the second draft is typed and cleaned up a lot. I guess the first draft is *technically* an outline, because it will come in at around 30-40 pages. But by outline standards that seems fairly long – I guess first I write the story as a novelette or pamphlet, and then let the story bake and expand naturally in further drafts.

For Fiction Writers: Do you listen (or talk to) to your characters?
I don’t know if I interact with my characters per-se. I’m intrigued by them, and maybe study them like lab rats. A lot of them tend to be damaged or have issues, and when they’re dropped into the plot, I almost think of the process as automatic writing, observing and narrating as I watch them get out of the given situation, fighting against themselves or the antagonists, evolving through the process because they have to. So I don’t talk to them, I guess is the point, I just watch them suffer and note down their actions like some kind of scientist.

How did you decide how to publish your books?
Having been writing for screens of various sizes for over a decade and half, it’s always been apparent that there’s a slim, slim chance of anything actually being made. Of the 100+ movies and shows I’ve written, barely a handful have had a chance to move forward. Even those that have slipped in didn’t make it to series or past the development stage, because there’s always been too much content, too many talented writers. Even now, this so-called ‘golden age of television’ has more content than there are outlets, and more writers vying for those spots.
I came to a realization that I don’t care about making money, I just want to get these stories in front of people’s eyes, so when I came up with the plot and characters for the books I’ve got coming out in January, I decided I’d try it as a novel rather than a screenplay, and it felt pretty good. So I started looking at other former projects to adapt, and realised I could probably write one a month for the next seven or eight years, and finally get the stories out of my head and into the world.
Plus I’m directing video trailers for each of them, so I still get to have a little bit of the visual vibes I always pictured for the tales.

What do you think about the future of book publishing?
The written word will never truly die. It will evolve as music has had to; from wax cylinders to records to 8-track to tape to minidisc (for 30 second) to MP3 to streaming.
I own a Kindle, and yet I still buy books. My grandfather’s study was lined with bookshelves full of fiction and non-fiction, religious and scientific texts, he was a prolific reader and collector of ancient tomes, and I think that’s been socialised into me. But when you don’t want to drag a bag full of hardbacks around, a Kindle is handy…
Newspapers may die, because their content has always been ephemeral, but a good book can last a lifetime and be enjoyed over and over.

What genres do you write?: science fiction, thriller, cyberpunk, comedy