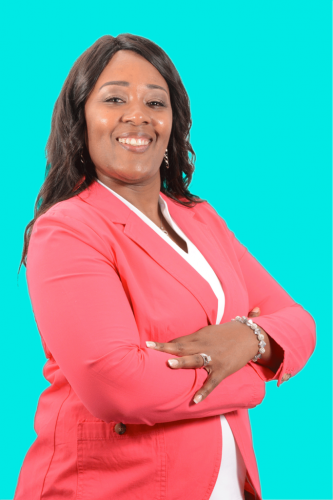 About Kimberly R Cox:
Kimberly Cox has a sincere passion to help others, especially the youth. She experienced a great amount or problems growing up, many of which made her a stronger person and fueled her passion to help others. At the age of seven, her parents divorced. Her father served in the Armed Forces and was only able to spend very little time with her during her adolescent years. Her mother suffered from an addiction and was in and out of her life for many years. As a result, Kimberly became the “Mother-Figure” for her younger siblings. These experiences are what made her realize that parental and familial relationships are a necessity. They are needed more now than ever.
Kim Cox currently works as a Corrections Officer. As such, she has experienced first-hand the strain that is placed on families when a parent is absent from the home. Her organization, My Brothers And Sisters, is the culmination of her vision to serve as a mediator for the youth in her community. She informs others it is her GOD-given mission to aid at-risk juveniles so that they aren’t sent off to juvenile detention facilities that never deal with the underlying issues these youth are facing. My Brothers And Sisters has many community outreach segments that allow adolescents to obtain counseling and mentoring as well as many fun-filled, family focused events in which they can take part. In 2012, Kim Stepped out on faith and hosted her first event an event, “Daddy’s & Daughter’s Date Night.” This event allowed fathers spend a special evening with their daughters full of good food, fun and, most importantly, making the most of the time to strengthen the special bond between them.
Kim Cox was born and raised in Pensacola, Florida. She attended and graduated from Escambia High School in 1993. She continued her education by attending Pensacola Junior College (now Pensacola State College) where she earned her Associate of Science degree in Criminal Justice and Troy State University from which she earned a Bachelor of Arts degree in Psychology. Kim is married to her husband of 14 years and they share four children. She is the oldest child born to her parents and also the oldest grandchild. She was practically raised by her grandparents who kept her in church. Kimberly also states with pride that her granddad was an awesome quartet singer.

What inspires you to write?
I have always been a person to journal. Growing up as a child I has been through so much that I felt that writing was an outlet for me to express how I felt and no one could judge me or bother me because of it. As I grew older and went back to read some of the things I wrote, I realized that some of what I had overcome could help carry another person across. This is when I began to share my story.

Tell us about your writing process.
My first writing was from a college term paper I had wrote. My professor told me that this was a great story that needed to be in a book. I didn't think I was capable of it but I did it anyway after I was pushed. I began to take classes on how to be an author. Most of the classes I took, especially the one from Get Write Publishing taught me that "writing comes by discipline, not by inspiration" which means you have to make a schedule so that the writing will get done as if we only write when inspired that book will be inside us for a very long time.

What advice would you give other writers?
Take the necessary steps to push that book out. Don't abort the process and definitely don't die with that book unpublished.

How did you decide how to publish your books?
I did research on the publishing process. Many companies require certain things before they even take a look at your book. My concern was them receiving a bonus off all my hard work so I decided to self publish. This was harder as it requires you to push your own product but the reward is you aren't being pimped for your work.

What do you think about the future of book publishing?
I think it is growing and more people are realizing that you can publish a book without having thousands of dollars.

What genres do you write?: Faith, Self Help, Love