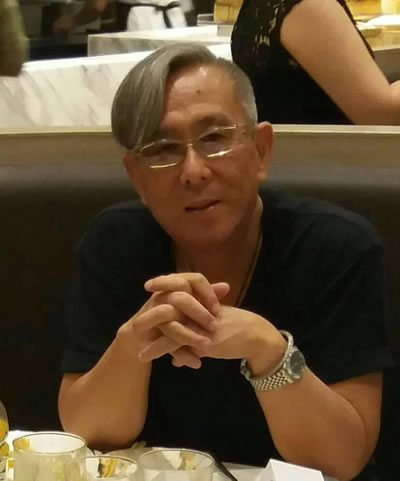 About Kenny Yao:
"Sometimes in life when we are handed a problem… we just go on and do the best we can. That way we survive the challenge and can achieve victory."

Kenny Yao is a retired Businessman turned Writer from San Francisco. A widower, he is a father of four sons. He is now residing in Manila, Philippines.

It all started years ago, when witnessing one of the most destructive typhoons in his local city, Kenny was inspired to build an evacuation center someday to help those in need.
The image of a chopper hovering down a rooftop to rescue a group of stranded family, became the inspiration for the very first scene that Kenny wrote for his debut novel, "The Sun Day". Since then, he has written and published over 3 novels, a collection of short stories, a book of poetry, and a Biblical nonfiction.

What inspires you to write?
I remember the first inspiration that prompted me to write my first novel, was when I was watching the news about a very strong typhoon that flooded our city here in the Philippines. And I felt dismayed, and at the same time, sympathy, that people had lost their homes and their livelihoods. I saw people climbed up to their rooftops for safety. There were choppers hovering above, trying to rescue them. These images of helicopters touched my heart, and a light bulb lit up inside my head that I also wanted to help out but could not. So finally, an idea set into my mind to build evacuation centers to provide rescue and shelters. These scenes inspired me to write what would become one of the major scenes in my first novel. There was a sense of message that I was moved to share: the idea that a lot of people needed help, and I wonder if each of us could contribute with even the smallest effort, then these small pieces could make a big difference. So the “The Sun Day” was born, and it was really made for it to be an apocalyptic one. Where, one day, people will be pushed to their limits to preserve their Christian morals, even to the point of death. As a Christian, I decided to use Bible verses to integrate it into the story, that paved the way for the characters to find a sense of hope and change during this perilous time. And after six years and six books later, this is the same reason which inspires me to keep on writing.

Tell us about your writing process.
I think of my writing process as “free form”. I don’t use or do outlines. Usually when I see a scene playing in my head, that could motivate my writing, then the story would go on from there. Whenever I hit a writer’s block, I usually get together with my sons to discuss possible plots and scenes on how to move the characters and the novel forward, as a whole. My four sons has always been a part of my writing team.

For Fiction Writers: Do you listen (or talk to) to your characters?
I guess, I’ve always “talked” to my characters in the sense that I’ve directed them where (and when) I wanted them to go: how they would behave or react to certain situations, and how to talk according to their characters. It’s easier for me to write the novel this way from start to finish.

What advice would you give other writers?
Just keep writing. I had over two hundred rejections from agents and publishers, and it never hindered my passion to keep on writing. I realized that to fail is a part of the process, and the secret is to learn from the experience. Surprisingly, each time I received a rejection, I learned something new. The good news is that there are more platforms to showcase my books. These platforms through the Internet has grown a lot and impacted the market. Now, a lot of readers are interested to discover new books from new authors. Every writer has more opportunities to gain readership than before. So keep writing!

How did you decide how to publish your books?
Like I’ve said in the previous question, while getting hundreds of rejections from traditional publishers, I had to find other ways to put my books out there. Then I discovered sites like Smashwords, Kindle, and Createspace that gave any author a chance to be discovered. And to a small degree of success, a lot of readers discovered and purchased my books, which I can only dream and hope could happen, and I really appreciate it. More than that, every now and then I get reviews (some good, some bad). And what I’ve gotten was an honor and I greatly appreciated it because I learned to write better. Feed backs (both the good and the bad) is very important for any writer’s growth. And getting that chance to be discovered is worth it.

What do you think about the future of book publishing?
Technology definitely shapes the way publishing, and reading for that matter, are moving forward. Paperbacks will always be in the game. A reader would always want to hold on to something tangible. However, there is this one online platform that I’ve tried, and they were using algorithms and readership data to test the viability of a book to be a bestseller. So I guess if one genius could figure out a better technology, I could see a new generation of “silicon valley” publishers using these kinds of system to publish and market books.