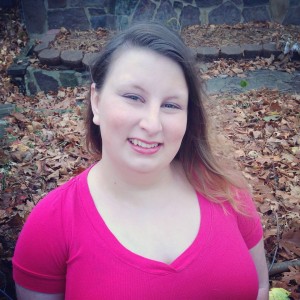 About K.M. Guerin:
Hello, I’m K.M. Guerin (but you can call me K)! I’m a 25-year-old wife of 3.5 years and stay-at-home mother to a toddler and a neurotic, 8-year-old golden lab mix. I live in the lower peninsula of Michigan, the “mitten” or “high-five” of the USA, and I’ve lived here my entire life. I grew up onstage, in dance and later in theatre, and it was through the latter that I was introduced to the local Renaissance Faire. While preparing for my first visit, I picked up a Philippa Gregory book, and I’ve been hooked on reading and researching historical fiction ever since. 🙂

What inspires you to write?
In general, Wikipedia. It sounds silly, but I don’t know how many times* I’ve seen something mentioned on Reddit or Twitter that’s made me go “huh?”, so I’ll google it, click the Wikipedia link, and suddenly it’s 16 hours later, my house has burnt down around me, anarchy has taken over the planet, and my child is beating back zombies with a Nerf sword. Okay, fine, not really, but Wikipedia is my TV Tropes for ideas.

Tell us about your writing process.
Being a historical fiction writer, I could never be a true “pantser”. Oh, I know of people who wrote their stories without doing any research, then going back and adding things, but I could never do it because I’m madly in love with research. I have literally spent entire days doing nothing but pouring over books and googling. The fun is in the chase, for me. For my current book, I actually have a 3-subject notebook where I’ve written down basic bios for my main characters, a timeline of events, and other “fun” tidbits like stuff about the economy or dress codes (both written and implied) and forms of address. I’m writing a family saga and I didn’t do this for my first book (although I think I may go back and write something just so I have a reference point for when I get further into the series).

What advice would you give other writers?
Don’t avoid the writing community! Take part in something on Twitter or Instagram (I made quite a few writer friends due to #PitchWars and #amwriting), go to a writing group (make sure to research it, though; some places are more for critiques while others are for networking, and still more are just for writing), take part in NaNoWriMo write-ins if you’re new to the whole thing or would prefer a less-professional-writer atmosphere. My NaNoWriMo region actually continues our write-ins through the year, and we’re kind of a kooky bunch.

We live in an incredibly social world. It’s easier than ever to have close friends anywhere in the world, and never meeting any of them in real life. It’s easy to just pop a name into Google and come back with their entire life’s story. Because of how public everything is now, writing-to-publish is no longer expected or even really allowed to be the reclusive passion of years gone by. Even “Big Name” publishers expect authors to help with their own marketing, by putting themselves out there, participating in readings and signings, and pushing their own titles until they’re blue in the face and the cows come home. It’s easy to do all of this if you’re comfortable, or at least able to fake being comfortable for a set amount of time. Start small if you wish, but start you must.

How did you decide how to publish your books?
I actually attempted to get an agent, but you’d be surprised how many agents are simply not interested in historical fiction. In my era (medieval/Renaissance), Philippa Gregory dominates the market, and there’s a saturation of Tudor or Borgia pieces, so that’s really all people expect. When I would see “Historical” listed under an agent’s list of accepted genres, it was followed by “Romance” roughly 90% of the time.

Ultimately, I found two agents to whom I decided to submit, but after 8 weeks I didn’t hear back from either of them. It was at that point, after much prodding from my husband, that I decided to publish through Amazon, and I haven’t looked back since. The moment I sent in my book was extremely nerve-wracking, and even without the excitement of having a Big Name attached to my book, it’s still just as exhilarating to see my name on the front of my proof. 🙂

What do you think about the future of book publishing?
Well, to hit on something I was just talking about with a friend of mine, it’s pretty obvious that brick-and-mortar book stores are on their last leg. Who really wants to walk into Barnes & Noble and pay $29.99 for a book that you can get on Amazon for $2.99 +s/h? Instant gratification isn’t worth paying $20+ extra. I mean, most paperback books are around $17.00 retail now, which is over half of my weekly grocery budget for a family of 3, and even my own debut book’s paperback is a whopping $9.25, the lowest amount Createspace would allow me to set.

And Barnes & Nobles are the lucky ones – indie bookstores are pretty much all dead unless they’re supported by being in a super trendy neighborhood, or near a college that allows students to sell textbooks to third parties. I’m sure this is going to cut down on the availability of cheap physical copies of books, which I think means authors really need to look into publishing at least one thing on an eBook platform, if only to get a taste of things to come.

What genres do you write?: Historical Fiction