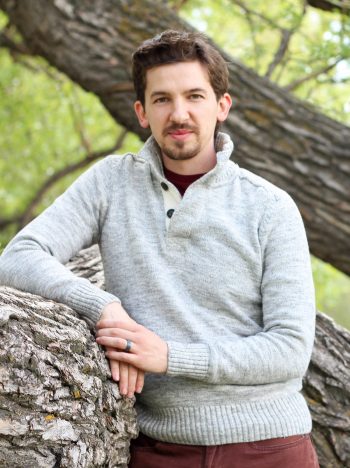 About Justin Fike:
I've been hooked on stories since my grandma first starting tucking me in with tales of her life on the South Dakota prairie swimming in my head. I grew up in the Blue Ridge mountains of Virginia and was blessed to have a mother who didn't complain when I came home from the woods covered in mud and burs, and a father who told me the stories that sent me out there in the first place.

I have a Masters in Creative Writing from Oxford University, and am the author of The Farshore Chronicles, as well as Fire in the Dawn, Book 1 of the Twin Skies Trilogy.

I'm a Martial Arts aficionado, a gaming nerd, a classics geek, and a list of other classifications both pejorative and praiseworthy. I live in Colorado with my amazing wife and two pixies in disguise who allow me to claim them as my daughters at parties.

What inspires you to write?
I was very fortunate to grow up in a family that loved to tell stories, so I think I always loved it too. I took a creative writing class every semester of college purely as a personal outlet while I studied something “serious”. The idea of writing and publishing professionally didn't really register with me until I graduated and began to think about and work towards the kind of life I wanted to live.

By 2014 I'd been working hard on a book for several years, but still just thought of it as a hobby. It wasn't until my mom asked me over coffee one day why I didn't just admit that I wanted to be a writer. “You light up when you talk about your book in a way you don't for anything else.” Thanks to her I finally committed myself to seriously improving my craft so that I could consistently write and release the kind of quality stories I'd been dying to create my whole life.

What authors do you read when you aren’t writing?
Neil Gaiman for the way he makes me feel and how I see the world differently after I finish one of his books.

Jim Butcher for his gripping plots and fantastic, loveable characters who grow and evolve in really significant ways over multiple books.

Raymond Feist and R.A. Salvatore for their intense fantasy action and worlds you can lose yourself in.

C.J. Cheyrrh for a masterclass in incredible, poetic writing that leaves you breathless.

Tell us about your writing process.
When I first started writing I would say I was an "over planner." I made up for my lack of confidence by trying to think out every scene and nuance of the story in advance. Unfortunately, that meant that I spent years revising outlines but getting very little actual writing done.

Over time I've grown into more of a hybrid approach that works well. I read and studied everything I could find about narrative theory and effective story structure to help me focus in on the key elements of a great story arc, but still leave room for exploration, creativity, and discovery along the way.

Now when I begin a new story I fill several pages in my current notebook with a kind of "story brainstorm" where I lay out key scenes, high point moments, bits of dialog, and basically all the things about the story that excite me the most. Then I organize those bits into a chapter by chapter outline within Scrivener that includes a simple bulletpoint rundown of the key elements of that scene, as well as some notes about the emotional tone I want to hit, key threads that I need to include to set up something later in the story, etc. I try to lay out enough detail so that I can just sit down and write the scene without having to spin my wheels, but also leave a lot of space for my brain to just play and have fun when it gets going.

Then when I'm writing I work to get myself into the scene and picture it as a movie so that I can describe what's happening without editing or filtering it. That's when I'm usually having the most fun. Inevitably some random idea or inspiration strikes, or a character says or does something unexpected that opens up a new angle on events.

By the time I type “the end” on the book there are so many aspects of the story that I didn't and couldn't have planned in advance. Those moments of surprise and unexpected discovery are what keep drawing me back to write the next story, and I think they're a big part of what people resonate with as they read them.

For Fiction Writers: Do you listen (or talk to) to your characters?
I think of it as setting up a scene with all the elements and pieces in place, and then I let the characters loose in that scene to do their thing while I watch. I know the key beats that need to happen to move the story forward, but I'm often surprised by how the various characters go about getting there, and I've lost track of the times when I've learned a surprising secret or gotten a better sense of someone's motivation in the middle of writing a scene.

What advice would you give other writers?
1. Start before you think you're ready, finish the book before you think it's perfect, and move on to the next one before you have it all figured out. It's easy to stay “safe” while working on the same story for years before you finish and release it (I certainly did). But you learn so much more from finishing a project and starting a new one than you ever could be going back over an existing book to try to make it 2% better. Trust that new worlds, characters, and stories will come to you as you finish the current ones. But, most of all, start!

How did you decide how to publish your books?
I think that the intimidating challenge of the traditional publishing route was a big part of the reason I avoided committing to writing for so long. It always seemed like such an exhausting lottery system, so the idea of investing so much effort an energy into writing books that no one might ever read was very demotivating.

But that changed as I began to learn more about the increasingly viable self-publishing options. The idea of writing books that would succeed or fail based on how much readers enjoyed them rather than on what a publishing house needed for their catalog that season really appealed to me.

For new authors trying to decide what approach is right for them I would strongly suggest making sure you're clear about your goals and dreams for your writing. What would ultimately make all the hard work and sacrifice worthwhile? There are advantages and trade offs to both paths, so if you know what matters most to you it becomes easier to decide which one best aligns with your goals.

What do you think about the future of book publishing?
I think that social media and other tools will continue to help readers connect more directly with their favorite authors as creators and real people rather than only following their books when they're released. I've observed that my fans are hungry for a more complete experience and connection. They like learning more about my world, seeing character art or other cool stuff from the series, and even sharing and connecting around other favorite books, movies, etc in my fan facebook group. I think that authors who are able to move beyond "marketing" to develop relationships will continue to do well and grow an audience for their books over time.

I also think that people's consumption of stories will continue to increase even as the formats those stories are presented in continue to expand. Right now audiobooks are becoming more and more popular, and when I recorded the audiobook of my first boxset in The Farshore Chronicles I was amazed at how I was able to achieve the same level of technical quality in my home office that used to only be possible in a professional studio. I suspect that the same thing will begin to happen with movies and tv shows and so on. As technology and tools grow more powerful and accessible we'll keep seeing creative people find new ways to use them to tell stories, which I'm personally very excited about.

What genres do you write?: Adventure Fantasy, Epic Fantasy