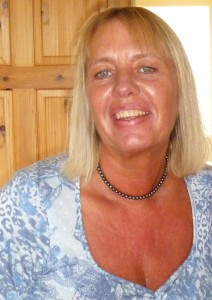 About Joy Mutter:
I was born in Jersey in the Channel Islands too many decades ago to mention. I went by the almost impossible to pronounce name of Joy Houiellebecq until my marriage in 1984. My profession was graphic designer for twenty years after gaining a Graphic Design Degree in Coventry. I then lived briefly in London before becoming a wife, mother and divorcee in Kent.

After developing a chronic back condition in 2012, not wishing to claim benefits I took the bold, some might say foolhardy action of selling my house in Kent and moving to the North of England in order to help fund my long-held ambition of becoming a full-time, published author. I now spend most of my days, including weekends writing books.

I would love to hear what you think of all of my books.

What inspires you to write?
Random Bullets was inspired by a chance remark made by my sister regarding inheritance. The Mug Trilogy consists of three autobiographical books. I decided to write the entire story of my life after first writing the second book of the series, The Lying Scotsman. I then wrote the first book of the series second, then wrote the third book, Straws in its rightful third place. Echoing my life, not even writing my autobiography was straightforward. Even as a professional graphic designer, I have always been an ideas person. I seem to be blessed to be fairly easily inspired. I already have ideas backing up for future books. My non-fiction book, called Living with Postcards sprung from my love of collecting postcards. I now own over two thousand of them and all of the colour illustrations in my book are postcards in my own collection. It is my best selling book and is based on my Art College final Degree thesis, for which I received a First with Distinction.

Tell us about your writing process.
Once I have a strong main idea, rough outline and main characters, then I am away. I am usually as keen to know what will happen in my books as the reader. Ideas pop up on the hoof and the characters end up living in my head. The action plays out in my mind. I think that this keeps the writing fresh. I always make four drafts, sometimes as many as eight drafts of each book which is a vital process to ensure each book is precisely as I would want to read it. I use Word to produce the work as I do not enjoy writing in longhand. It makes it so much easier to move chunks of text around and my handwriting has deteriorated over time. However, I do keep several notebooks around the house in case I need to scribble down an idea, and have often used Notes on my iPhone whenever ideas come to me when I am out and about.

For Fiction Writers: Do you listen (or talk to) to your characters?
I can clearly see each character in my book as I write and briefly become that character and the setting whilst I write about them. I have been known to change what I had planned to happen to certain characters because I had become fond of them. If I dislike a character, they had better watch out!

What advice would you give other writers?
Life is short, so if you want to write and you are self-disciplined, self-reliant, resilient and talented, do it. If you want others to read your work and it is taking forever for an agent to represent you, publish it yourself once your book is as perfect as it can be. If you cannot stomach a feeling of despondency if your book is slow to sell then don’t publish your work. A real author is one who continues to write even when nobody seems to care if you write another word. Writers sadly have to be marketing experts too, even if they are traditionally published and not an indie author like I am. Very little in life has given me so much pleasure as the process of writing and publishing six of my books on Amazon.

How did you decide how to publish your books?
After sending my first four books to agents, although I received positive feedback I became impatient and decided to self-publish. At my age, I could not wait around for agents to squeeze me onto their overcrowded lists. In July 2015, I published all six of my books as Kindle editions using Kindle Direct Publishing. I then used Createspace to turn all six books into paperback versions in November 2015. As I worked as a professional graphic designer for twenty years, I also produced all of my book covers myself. I plan to self-publish all of my future books in this way as I have experienced no problems and enjoyed the process from initial book idea through to publication. My books are printed on demand through Amazon, so I don’t have to worry about storing thousands of books somewhere.

What do you think about the future of book publishing?
I think that self-publishing will increase for both Kindle and paperback formats. The reader will have to be vigilant to ensure they are not purchasing substandard work, although I do not subscribe to the view that all self-published work is trash as some people maintain. As an indie author who has received encouraging reviews for most of my recently published books, I believe self-published authors have a strong, valid place within a crowded market. I am immensely surprised, gratified and proud to have achieved my life-long ambition of becoming a self-published author.