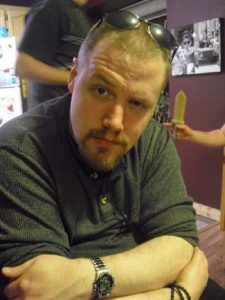 About Joseph Picard:
B.C. Lower mainlander since 1992, Joseph has always tinkered with art, music, and writing. He chose to focus primarily on writing in the early 2000s, and his short stories have since evolved into character-driven novels of science-fiction and broader speculative fiction. In 2001, he found out that cars are harder than mountain bikes, and has been a paraplegic ever since.
Miraculously, this has not altered his career arc as a quarterback, basketball star, pole-dancer, or kung-fu movie stunt double.
Thankfully he has that whole ‘life-long-nerd’ thing to fall back on.
With a daughter, Caitlin, born in 2007, and a son, Lachlan, in 2011, free time has become a very valuable asset, and most of it gets poured into writing.

What inspires you to write?
Most of my books start with “wouldn’t it be cool IF…”. Then I try to create a situation that makes it seem plausible. Then I sprinkle in characters. From there, they take over. Some of them get nasty, some get heroic, some fall in love, and some die. If I can create a connection between characters and myself, (and hopefully the readers), then mission accomplished.

Tell us about your writing process.
My outlines flesh out as a half-page long list of point form notes- often copied from a scrap of paper that was unlucky enough to be on hand when I got an idea.
Then, music is needed. Lyrics are generally a no-no, as they has be a linguistic distraction. The soundtrack to the movie “Moon” is great for this. Sometimes certain selections of techno can fill the role for a bit.
The outline is not set in stone by any means. The points are targets, and I feel no obligation to hit them. They encourage moving forward. A point like “Bob goes shopping” could end up being a pile of pages, and while I’m writing it, something I didn’t expect might happen. Something that could shift the whole story for the better. When this happens, the entire rest of the outline needs revision.
If I get inspired to write out a point much further down the line, I’ll write it. It’s ‘not time for it’, but you strike when the inspiration is hot. Then I go back up to where I was, and keep filling out the points in order. When I get to that ‘inspired section’, I might find that it needs to be overhauled due to developments that happened previously, and weren’t there before. But that’s okay! The inspired aspects still shine through.
When I get to the end, I read, revise, edit, edit, revise, correct, so a search for common typos, (CTRL-F… From. Was that ‘from’ supposed to be ‘from’, or did I mean ‘form’? Repeat for ‘form’, etc..) I have a list of words that I need so screen for.
When I think it’s prefect, I enlist my editing force… largely this is for typos, but formatting tips pop up sometimes too. Some of these are a bit subjective, but worth considering carefully.
While the manuscript is in the hands of others, I try to finish the cover(s). When I get the scribbled-on copies back, I go through each taking ‘almost’ all of the suggestions. Then I read it again. And again. Eventually, I have to declare it ‘done’, knowing full well that it can’t be entirely free of errors. You have to accept it, for if you don’t, you slide down the path to madness.

For Fiction Writers: Do you listen (or talk to) to your characters?
Regan from Lifehack jumps into the role for my imaginary friend now and then. Being the star of my first novel, she seems to feel entitled to first chair.
When focusing on getting to know characters, I’ll imagine them talking to each other. Often about stupid things.
“You like pizza?”
“Sure, who doesn’t?”
“Ouch. I’ll have you know my sister is lactose intolerant.”
“Sucks to be her. Doesn’t mean she doesn’t LIKE it.”
“Alright, sure, but.. ugh, just never mind. I was going to treat you and order out, but I changed my mind.”
“What? Why?”
“You’re acting like a jerk!”
“I’m sorry!”
“You’re only because pizza is on the line.”
“…. yes, mostly.”
Etc…
And eventually, I might stumble on something useful. It was Jim Davis doing Garfield that gave me the idea. He’s draw the comic with no aim at all until something happened that he thought was funny, then edit it to the right number of panels.
Sometimes I decide a character is my imaginary friend for the day, and they’ll comment on things ‘we’ see during the day, and things I do. …. uh… I don’t say them out loud though… that whole path to madness thing again….

What advice would you give other writers?
Write to write. Write something awesome, whatever awesome is to you. It’s too easy to get distracted by the financials, the marketing, and all that stuff. Do it to bring something awesome into the world, even if only a few people read it, or (GASP!) buy it!
If you’re reading your stuff and think “Oh, that part is a little unclear, but my readers are smart, I’m sure they’ll get it..) No, BAD writer. Fix it. Readers shouldn’t have to do the work, the words should be enjoyable to read and understand.
Tread lightly on the thesaurus. It doesn’t make you look smart to throw in obscure words. I’ve been told that reading my stuff is a bit like talking to me. Good. I think. But you want the personal connection. I assume…? Don’t you?

How did you decide how to publish your books?
When Lifehack was congealing into a book, I sniffed around at my options, and found that if I wanted to go with traditional publishing, I should pick my 50 favourite publishers that would suit the book, apply by their requirements, (one might want chapters 1-3, double spaced with 1-inch margins, the next might want 1.5 spaced with half inch margins, and want the whole thing, the next might want it on legal-sized paper, chapters 4, 12 and 16, I shit thee not,) and at the time, NO ONE wanted a digital copy, so buy some ink, and a bunch of stamps! And after that’s all done, you would have to wait nearly a year to find out if any of them EVEN GOT IT IN THE MAIL.
Screw that, frankly. “But that’s what an agent is for!” …. which means applying to agents first, which leads to more hunting for a fit and applying to different people.
Then I found out about self-publishing. It has its downsides, sure, but for me, the upsides win out. Be careful who you use though… many of them require a couple hundred dollars or more to get started. I’ve used Lulu and Createspace, and while they DO offer some pricey services, if you can do most of it yourself, You can get it done free, paying only for the copies you want printed for yourself.
Ebooks? I’m no pro by any means, but again, shop around. Amazon/Kindle is the biggest, Smashwords has a lot to offer a writer… there’s a lot out there, but read that fine print.
Don’t sign away any exclusive rights to your work unless you’re VERY sure it’s worth your while.

What do you think about the future of book publishing?
Wow. Everything’s up in the air, and ebooks are gaining ground fast. That said, I don’t see paper disappearing… I make nice covers for my book, and darn it, it’s not the same as a little image on an e-reader.
Similar to movies, games, music.. physical copies seem to be turning into items for collectors. For items you really really liked, and are proud to see on your shelf. There’s also a permanence to a physical copy. In fifty years will you still have access to your kobo books? How many author signatures fit on your iPad?

What genres do you write?: Sci-fi, and the ambiguous ‘speculative fiction’..