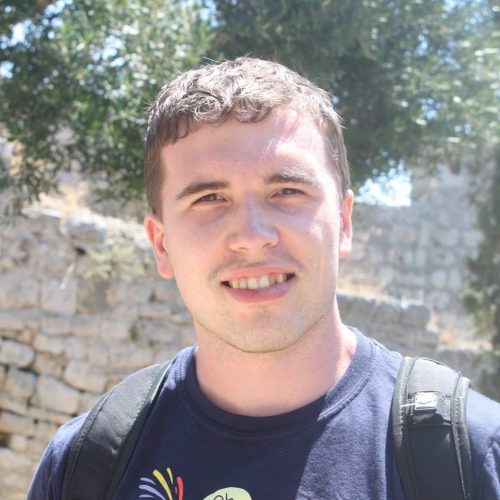 About Jonathan Baldie:
Jonathan Baldie is a writer and software developer. He has a degree in mathematics and lives in Stoke-on-Trent, England.

What inspires you to write?
In 2017 I went through a deep depression, and during this time I really got into audiobooks. I wasn’t already a big reader by then, but I was desperate for some kind of guidance. I listened to authors like Brené Brown and Robert Glover to try to make sense of things. I came to love audiobooks and downloaded many books over the rest of that year. Then I came upon one author named Robert Greene, who has written books like The 48 Laws of Power and Mastery. These books really emphasise objectivity, personal power, making you a more effective person. Robert’s message really spoke to me, and I thought “God, I’d love to write a book like this one day.” His writing style is centred on telling historical stories and delivering timeless advice in an authoritative style. It was just what I needed at a dark time.

So in 2018 I set out to write a book of my own. Most of all, I wanted to have the same positive impact on my readers, that Robert had on me. To tell you the truth, I actually intended to write a fiction book at first! This was because I loved fantastic story series like The Lord of the Rings, Star Wars, and the Marvel Cinematic Universe, and I wanted to throw my hat in the ring. So I researched what makes stories work and found mixed results. These books were either way too meandering and unfocused, or too narrow and based on individual tactics. Don’t get me wrong—these were all good books, but I realised that my true calling was in writing books that sit more in the middle: I want to write books that are these large tomes full of historical stories, and timeless practical advice.

I want my writing to be read in 100 years in the Thai language and it still to resonate as much as Robert’s writing did for me in 2017. I used this drive to write The 24 Laws of Storytelling in 2018, and I’m carrying it on for my next books in 2019 and beyond.

Tell us about your writing process.
The short version is that I’m an obsessive Plotter/Planner. The longer version might be best described by going through my process for the book I’m writing now. For this book, I carried out a long, detailed research phase. In 2018 I spent 10 months reading over 109 books on human nature, psychology, and group dynamics. While I read these books, I jotted down the important parts on paper notecards. I ended up with hundreds of notecards and then used these to work out a structure for the book. I wrote a detailed outline I knew would form a solid basis for the book, and in January I finally started drafting.

I know that some authors don’t enjoy doing such long planning phases for their books, but let me say this: In just over a month of drafting, I’ve already written over 50k words. In the last month, I’ve rarely come across writing blocks. I firmly believe that this was because of my detailed outline. Each day I sit down to write, instead of having to summon immense creative energies, I already have an outline to follow—writing becomes more of a daily flow state. This doesn’t mean I have to follow it to the letter. For example, the other day I listened to a podcast interview that had a dozen great ideas, and I added these to my current chapter. As is often repeated in Eastern philosophy: be like water, flexible and formless. Respond to circumstances with good principles, not individuals “tricks” or tactics.

The image of the starving artist, struggling through months of writer’s block, is a complete myth. Professional writers create a detailed outline. Not all authors like to outline, but I firmly believe that doing thorough pre-writing work more consistently produces great results than otherwise.

Once this drafting phase is done, it’s time for a pause. For 24 Laws, I put the manuscript away for a few weeks and got on with other things. This meant that when I came back to do my round of self-edits, I’d gained some distance, and I was a lot more objective. I found errors that I wouldn’t have spotted otherwise. I happily subscribe to the premium plan with Grammarly and ProWritingAid (free through SetApp for macOS). Both of these tools give me writing style guidance, and show me where I’ve used overlong sentences and passive voice.

Then, I pass my manuscript to my copy-editor. I use an experienced professional copy-editor based here in the UK. With 24 Laws, she pointed out so many errors that I wouldn’t have spotted in a million rounds of editing. I can’t emphasise enough how important this step is—a professional editor costs a lot of money, but she’ll make your manuscript a lot more professional and readable. We continue our edits until we feel like each iteration is mostly just nitpicking little issues in voice and that kind of thing, and then the book is ready!

This entire process took just under a year for 24 Laws. As a self-published author, I’m able to move quickly and submit my manuscript to a lot more rounds of edits than I would with a traditional publisher. And with each successive book I write, this process is getting more detailed, more thorough, and more efficient.

What advice would you give other writers?
1) Plan, research, and outline. This will make it so much easier on yourself down the line. Writing becomes less about summoning immense creative energies every day, and more about producing actual work.
2) Make your book (or other work) either extremely entertaining or extremely practical. Fiction writers: make your story extremely resonant. Touch on real themes of human nature, and think of how to tug on heartstrings—you can’t do that with soft silk gloves.
3) Yes, people do judge books by their covers, as much as we hate to admit it. I invested a lot into my book’s cover, and it’s no doubt contributed to its sales.
4) As Anne Lamott puts it in her classic book on writing, great creative works we can be proud of aren’t produced in an immense burst of great genius, but Bird by Bird. Piece by piece. Day by day. Word by word.
5) Find a great, independent copy-editor and listen to her advice. Don’t take any of it personally, her job is to make your work great, so let her do just that.
6) If you have an idea that you love, don’t ever think “Oh, someone’s covered this before.” No one can write in your unique style, or approach it with your perspective. Just write to your heart’s content and let your own style flourish.
7) Finish projects. Don’t let things stew in unfinished Word documents or Evernote folders. Writers write, so do that.

How did you decide how to publish your books?
I’m firmly in the Amazon KDP self-publishing camp. I explained some of my thoughts in a talk I recently gave to an audience of fellow authors, so I’ll repeat some of it here for your readers’ benefit. Whether to go the traditional or the indie route is a personal decision that only you as writers can make. I think there’s a stigma against self-publishing that isn’t entirely unjustified. I’ve picked up self-published books that had ugly covers and were full of typos and wandering prose, even though the content was really interesting and useful. On the other hand, I’ve also found traditional publishers passing on fantastic manuscripts due to time and people constraints, with famous authors being given lenient editorial standards out of a fear of losing their valuable contracts.

The battle shouldn’t be between self-publishing and traditional publishing, but between professional and unprofessional publishing. I could have allowed my book to be as bad as any of the millions of self-published books on Amazon, but I didn’t want that—I wanted to publish a book that’d still be here in 100 years, that would genuinely help storytellers and writers, and provide a timelessly entertaining experience to readers, even if they’re in farthest East Russia a hundred years from now. To do that, I spent money on editors and a fantastic cover design, submitting my books to edits and going hard on the research and planning.

With self-publishing, you have complete control over everything, and if you’re fortunate enough like me to have a good 9-5 job and the resources to pay editors and cover designers, it can be wonderful to have that control. But you’re on your own, and you take on 100% of the risk. Now for me, that’s perfect, because I love taking responsibility, and I’m just kind of a lone wolf character.

Traditional publishing offers you the potential for a stable income, and the backing of a company that has your book’s best interests at heart. They have the resources, editorial, publicity-wise, and legal, to give your book a good chance of success. However, you must accept that in this scenario, the publishers may make decisions that you don’t agree with, and they may hold rights over your books in the future too. You can also easily add at least a year to your publication date.

I totally understand the decision to go for traditional publishing, and it’s not as mystical a process as it might seem. If you’re active on social media—particularly Twitter—you can interact with hundreds of agents who are looking for your kind of writing. Present yourself well, don’t badger them, or they’ll avoid you and put up their defences. Just be a genuine person, and you’ll attract the right kind of attention from these people.

What do you think about the future of book publishing?
I think it’s clear that the traditional publishing industry is on the decline. I read some statistics that showed self-published books outsold traditionally published books on Amazon (going by units sold) in 2017, and the gap was wider in 2018. More authors are realising that they can do just as good a job on their own as they were before with a publishing house behind them.

As I said before though, I think the real line is going to be between professional and unprofessional publishing. As with most things in life, the creators who put the most effort into their creations are the ones who get the most back out of the industry. Authors who best understand they need to publish a professional book, not one they lazily wrote and edited in a month, are the ones who’ll succeed the most.

Many editors are also realising they can do much better for themselves by going freelance. My manuscript cost almost a thousand pounds to edit, but the advice and corrections are invaluable, because I’m aiming for the book to sell at least that! This kind of small business owner mindset is going to push standards higher in the self-publishing market in the future.

My worry is that as the publishing industry gets more competitive, the tough market will only make it possible for an oligopoly of large publishers to survive, because this won’t result in good deals for authors. I predict this will push more authors over to self-publishing, as they realise they can empower themselves to build their own writing careers.

What genres do you write?: Non-fiction, writing craft, stories