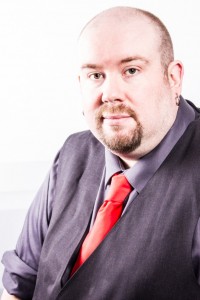 About Jeremy Flagg:
It started with single comic book. My mother was determined to make a reader out of me. Shunning traditional literature at a young age, my mother placed X-Men Classic #69 in my lap and for the first time I was exposed to the phrases, “Mutants,” “BAMF,” and “SNIKT.” From that moment on, I imagined my enrollment at Xavier’s School for Gifted Youngsters at 1407 Graymalkin Lane.

By middle school I was devouring fantasy and science fiction faster than I could check them out of the library. However, my first love remained comic books. I began writing my own comics with my best friend, and by the end of my eighth grade year, I had written over a hundred issues of the superhero series that would eventually become Children of Nostradamus. Meanwhile, I spent my Tuesday’s at the grocery store, rummaging the racks, reading any comic put on the shelf.

I became known as a geek before it was a trend. During college Jeremy would be shortened to Remy as friends discovered my goal of reading every X-Men comic. Being able to explain the many relationships of Scott Summers and his multi-dimensional children became a badge of honor.

I came to writing late in my professional career. For a short period I majored in Creative Writing but eventually turned to Graphic Design for my career. It wasn’t until 2006 that I participated in my first NaNoWriMo writing an epic science fiction novel. Later I would use the opportunity to write Suburban Zombie High and my first draft of Children of Nostradamus. Now I am the NaNoWriMo Municipal Liaison to the Massachusetts Metrowest Region. I also belong the New England Horror Writer’s Association where I’m known as the sarcastic zombie author. I also partake in a weekly writing group called the Metrowest Writers where people are flabbergasted by my love of comics and scifi.

What inspires you to write?
I’ve always been a fan of telling stories, and eventually I discovered writing was a good way to document them. My inspiration comes from personal experiences and my past. I’m always told to “write what I know,” so I make sure to include that into each of my books.

Tell us about your writing process.
I write by the seat of my pants. In each of my novels, I have bullet points I want to hit and I know where the story needs to end, but I let the story take me there. I think this allows characters to grow organically and it allows me to not be so rigid in my structure.

For Fiction Writers: Do you listen (or talk to) to your characters?
My characters haunt my dreams! I talk about them like they’re real people and my actual friends get a bit nervous. Thankfully they’re always there if you need a good conversation!

What advice would you give other writers?
Write. I know it sounds foolish, but great ideas don’t make you a writer. Take the time, sit down, write and then write some more. Finish your story and then you can move forward. Without that, there’s no point in being hopeful if you’re not willing to put in the work.

How did you decide how to publish your books?
I originally wasn’t going to. I had been writing for six years before I decided to publish. At that point they were just for me, but after some friends read my work and suggested moving forward, I did. It’s an entirely different beast when you’re writing for consumers and not just for yourself. It’s like having ravenous fans wanting your next book! It keeps me writing.

What do you think about the future of book publishing?
I don’t think a whole lot will change. Independent publishers will continue to grow and eventually they’ll rival the Big 5. For now, I like going with the small guy for publishing.