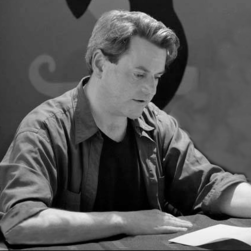 Not content with his midwestern roots, he found ways on the cheap to explore the wider world including selling gummy bears in high school to visit the Alps of southern Germany. To pay for college, he worked a slime line as a head chopper in the clammy tundra of Alaska.

His thirst for adventure next took him to Asia where he studied the martial arts and Asian philosophy while exploring exotic locales such as the Himalayas and the lands of Lord Jim, even surviving a squall in the Gulf of Siam.

His flair for the dramatic led him to write and stage fifteen plays in and around the Seattle theatre scene. His works earned numerous laurels such as "an intense dramatic comedy you don't want to miss…an uninterrupted 90-minute power pack with something to say," for his One Tile Short and "a trip and a half in a little more than a hour and a half through an Alice-like wonderland and a half; ground-breaking in ways more than one," for his Teacup Tipsy.

Too restless, however, to merely sit behind a computer, he recently completed a solitary 750 mile hike from Stevens Pass in Western Washington to end, a Biblical sounding forty days later, at Old Faithful Geyser in Yellowstone National Park. Once upon a time, he even ran for Congress. If it's big, Stilwell has dreamt it, attempted it, or achieved it.

What inspires you to write?
The Iraq War is a fascinating time for me because it proved the most divisive period in America since the Vietnam War. So many of the ideals used to justify the Iraq War – only to be rejected later as neo-conservative delusions – had been held in very high regard just two generations earlier during WWII and the reconstruction of Europe. This paradox of what role, if any, America should play in the world endures. To my reading of history, this great debate began during Thomas Jefferson’s administration and echoes down to the present day.
In that regard it was easy for me to write Jake’s character. While I have the same longing that Andrew has for a world without war, I know from personal experience living overseas that this world can be a very dangerous place. Thus, Jake, a soldier whose basic motivation is the Arthurian legends of Lancelot – a shining knight righting the wrongs of this world by defending those who cannot defend themselves – was equally enthralling.

Tell us about your writing process.
It sounds extraordinarily inefficient at first blush, but my richest writing comes straight out of literally hundreds of hours spent quietly dreaming, telling myself story after story after story.

For Fiction Writers: Do you listen (or talk to) to your characters?
Yes and no. I start with a clear idea of where things begin and how they end. I have a broad idea of how they're going to get to that end. Sometimes, along the way, the characters rebel and I have to change course.

What advice would you give other writers?
My story telling skills improve as I tell myself more stories. I test out various motivations, character flaws, inspirations and such in the hours and hours I spend dreaming up stories in my head. Some scenarios work. Others don't. I don't write any of those down. For me, it is the best way to improve my skill.

How did you decide how to publish your books?
At first, I sought a traditional publisher because it felt like the more authentic way to be a published author. However, due to Amazon's entrance into that field, it became even more difficult to get an agent, much less a contract. So, frustration gave way to self-publishing. At first, it felt like a step down. But over time, I found it a far more satisfying result than never being published at all.

What do you think about the future of book publishing?
Quality will out, I like to remind myself. With self-publishing being so easy, anyone can write a book and publish it. Thus, the market is now flooded with options. While it might seem easy to say that the best ones will rise to the surface, it's difficult to get noticed, regardless of your writing skill and story-telling ability. Nowadays, in conjunction with this phenomenon, a whole internet infrastructure has arisen to help authors get noticed.

If you still long for a traditional publisher, working hard to get noticed can prove to a publisher that you are worth the risk.

What genres do you write?: literary fiction, Romance, Women's Fiction