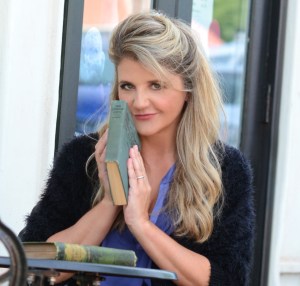 About Jeannie Kaye:
Jeannie is many things – wife, mother, entrepreneur, life coach, personal trainer, speaker – but at the heart of all things, she is a writer. From the University of Texas student newspaper and award-winning science textbooks to romance novels, Jeannie’s writing continues to evolve and diversify.

Jeannie is best known as Jeannie Fulbright, author of seven science textbooks, 14 complementary workbooks and seven accompanying audiobooks. The books, of which nearly one million have sold, have won awards every year since 2007, including Reader’s Choice Awards, Old Schoolhouse Review and EE awards and Practical Homeschooling Reader Awards. Jeannie’s science curriculum is one of the most highly rated in the nation.

With her children nearly grown and the last textbook written, Jeannie now has the opportunity to pursue her long-time dream of writing fiction. Drawing upon her masters-level work in counseling, life coaching and marital teaching experience, Jeannie is committed to writing provocative romance stories that offer substance by dealing with real life issues, including marriage, personal and relational success and emotional wellbeing.

To differentiate her educational books from her romance novels, Jeannie writes fiction under the pseudonym Jeannie Kaye (www.jeanniekaye.com). It’s been a well-received transition – one of her early, unpublished works won the ACFW First Impressions award. Ever Locked, the first in a gripping series, is available in early 2015.

Jeannie was born in Guadalajara, Mexico, grew up in Austin, Texas and lives in Atlanta, Georgia. She graduated from the University of Texas in 1991 with a Bachelor of Arts in Psychology and became a life coach in 2013. She is passionately in love with her husband, who has been romancing her since they met in college. Together they have four children – two teens and two new adults – Jeannie’s very favorite people on the planet.

When Jeannie is not working, she can be found boating with her kids, traveling or writing. Always writing.

What inspires you to write?
When I’m not feeling naturally inspired to write, I often turn to music. I explore little known musicians on Spotify, wandering down rabbit trails by clicking on “musicians similar to this musician.” I get lost in Indie music for hours and hours, listening to the lyrics and the hearts of individuals. It’s pretty powerful that these talented people can tell tales of love, heartache, passion and pain in only four minutes flat, inspiring you to feel those things along with them. Music. It’s a huge inspiration for me.

Tell us about your writing process.
I map out the story, sometimes chapter by chapter with little snippets of what will happen chronologically. Then I write. I just write until it’s finished. However, as I write the story, the characters take on lives of their own and the story becomes something entirely different.

When the story is finished, I begin revising. This is where I put in the real work of rewriting sentences and looking at word usage critically. I think through themes and each character’s journey, making sure we see their transformation.

For Fiction Writers: Do you listen (or talk to) to your characters?
I definitely listen to my characters. Sometimes I’ll wake up in the morning with whole scenes that need to be written. It could be something funny or maybe tragic, but it’s always something the characters are dying to have on the page.

What advice would you give other writers?
Find an editor you love. Try several out until you find ones with whom you can really connect – editors who understand your heart, your goals and your purpose for writing. They’ll be true to that as they edit. They’ll keep your voice even as they refine your sentences. A good editor is worth his or her weight in gold and will become your best friend.

How did you decide how to publish your books?
I self published my first book (a nonfiction science book) in 2001, then signed with a publishing company a few years later. When I decided to venture into fiction, I was open to going the traditional route, but as I talked with agents, editors, and publishing houses, I realized that self publishing would allow me to write my story, my way – not the story an agent or publisher believes is a safe bet with the customers. So, I went Indie. I’m still open to other avenues, but I’m enjoying the learning curve and process of publishing.

What do you think about the future of book publishing?
I think the ease of indie publishing has dramatically changed the landscape for publishing as a whole. Indie authors are producing well-written, breakout novels and offering them to the public for far less than the traditional publishers can, thus driving prices down for eBooks especially. Some may not agree that this is a good thing, but as a reader myself, less expensive books means I can feed my reading habits without damaging my checkbook. I believe the indie publishing explosion empowers writers with the freedom to pursue their dreams, and that to me, is what the American Dream is all about.