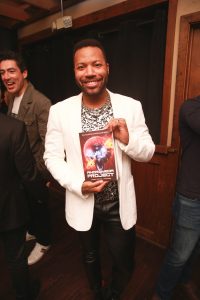 About Jason Primrose:
Jason was born on May 6th, 1984 in Alexandria Virginia. He has been reading books and telling stories for as long as he can remember. His first book, Dragon Wars, was a seventeen page picture book complete with heroic figures and word bubbles. This passion for sharing adventures went a further step forward when a science journal, Beyond the Science kit, published a short story he wrote. As a teenager, books by C.S. Lewis, Madeline L’Engle and other sci-fi and fantasy authors fueled a desire to escape from life and create alternate worlds and characters. The Andromeda Project is his debut feature length novel and the first in The Cluster Chronicles Series, a story about perspective and purpose.

What inspires you to write?
I write because I love to read.

One of my favourite authors C.S Lewis said “Literature adds to reality.” Stories have a unique ability to shape people’s lives through perspective and understanding. On a mass scale, there is no better way to communicate these messages. Books and my own imagination often provided these outlets as a child.

I guess I could’ve written a book about perspective and understanding as a non-fiction title but I wrote the Andromeda Project because this story, this world, these characters have been living in my head since I was about seven years old. Not in the same way, but they’ve been there, evolving as I evolve. I’ve written a few complete versions of it, the last one I finished at 22 or 23. Then five years ago I picked up the manuscript (formerly known as Dragon Wars) and decided to rewrite it in a different way. I also want to instil courage in young writers, and show people that understanding will be humanity’s salvation.

Tell us about your writing process.
Writing is the most fun and most difficult thing to do. I have so many ideas in my head all of the time, it’s impossible to get them down on paper and once I do, it’s hard to decide what should stay and what should go. But I tend to outline the story, what happens and who is involved from beginning to end, then go in and fill in the details. I typically go through and add layers with each revision to “perfect” it. I started using this amazing software called Scrivener, recommended by another author. It completely changed my process by allowing me to separate my book by sections which are then grouped under chapters. This way I can find different sections of my book easily, make notes in the side columns without disturbing the text and look at a high level and granular view as needed.

In the last few years I’ve learned to focus and not become emotionally attached to ideas and characters. It’s helped a lot because when my editor came back and told me I had to rewrite everything after page 100 in a 600 page book, I almost had a melt down. It took me nearly three months to rewrite the story, eliminating obsolete characters and storylines, I had to shut myself in. The biggest challenge was creating the story then closing the story, without going off about things to come in later titles. I also read the entire book out loud to make sure what the characters were saying , they’d actually say. Another challenge was writing with introspection from the characters, getting a good sense of my writing style and not having it read like a screen play. I remember in my second pass through, everything happened too fast.

I spent a lot of time in solitude during the writing process and will be doing so again as I write the second book (which I hope to have out by end of next year).

For Fiction Writers: Do you listen (or talk to) to your characters?
I always listen to and talk to my characters. Some of them are my friends, or two or three friends wrapped into one character. I can tell when they aren’t being themselves or they are involved in something they shouldn’t be. But they make me laugh and they make me think. Character creation is my absolute favorite thing to do, the hardest part is not having too many.

What advice would you give other writers?
Never give up – What I mean by that is, if you love writing, then keep writing. Nothing should stop you from doing what you love; not work, friends or family. Writing has been my passion for a long time and only recently have I been able to move other things aside so I can really enjoy that part of my life.

Learn the business/Do your homework – you don’t want to be the one getting ripped off on artwork, editor fees, marketing, PR etc.

How did you decide how to publish your books?
I really was going to write the entire series and then put it away to continue on with my life, like I did the last time. But in the last ten years I’ve spent a lot of time and energy building other people’s businesses. I learned the ins and outs of marketing, social media, web, PR and more. I decided now might be the time to apply that knowledge and build something of my own. I did a lot of research on self-publishing, stumbling through all the mistakes, but managed to accomplish it! In this day and age, people aren’t handing out publishing contracts, so I figured I’d build my own world and fan following with amazing content and stories. If you have relationships with a publisher, more power to you but I think it’s always best to have some leverage and it’s hard to do that without money and/or a solid following of your own.

What do you think about the future of book publishing?
I love this question. First, I believe it’s going to be amazing that so many writers can put out books. Instead of publishers being the gatekeepers, it will fall to the audience to decide who stays and who goes. With so much to absorb and experience in the world, authors will have to shift with changes in focus (i.e. social media, electronics etc.) and get creative to stand out. That’s why I added pictures to my book. I LOVE pictures as much as I love reading. Although I have quite an imagination, I grew up on comic books and books with slight visual stimulation. I felt it would be essential to the series.