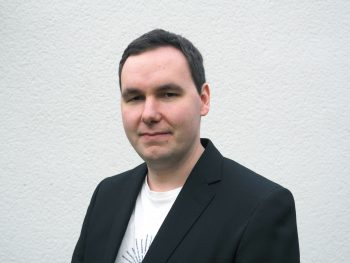 About Jan Kotouč:
Jan Kotouč (pronounced as "cot-OUCH") is a Czech author of space operas, military SF and alternative history. His first novel was published in 2009 and since then he has written a number of novels in Czech. Frontiers of the Imperium is the first book in his latest series, the Central Imperium. He is one of the handful Czech writers who has found success on the English-speaking market. Apart from writing, he teaches at a university and is a popular speaker at a number of conventions.

What inspires you to write?
It probably never occurred to me NOT to write. Or at least not to tell stories.
I'd been reading a really bad fanfiction when I was 14 and I thought "hey, I'm sure I can write better than that!" Later I'd read a really bad novel that someone apparently published and paid the author for it, so I again had the same idea.
Seriously though, I've been telling stories since I was a kid. When I saw a movie or a cartoon I kept replaying it and improving it. Even though I'm not an only child, I've always preferred to play by myself, to be all characters in my stories and to not be disturbed by anyone else. And then I became a writer.

What authors do you read when you aren’t writing?
David Weber, author of the Honor Harrington series (among others) had the biggest influence on me. Not only as a storyteller but also as a working writer. His prose flows so nicely that it can recharg my writing energy and I feel the urge to go writing myself.

Tell us about your writing process.
I'm an outliner. Nothing fancy, I just write bullet points of all events in the book. I also write extensive character lists and ship lists. Since I write about spaceships and space fleets, my first step is to write the names of all ships. That is my favorite warmup exercise.

As for writing itself, I can write at any time of the day but I prefer late evenings/nights when everyone else is asleep and I can concentrate best.

For Fiction Writers: Do you listen (or talk to) to your characters?
Not like you mean, probably. But I do sometimes realize that I'm stuck because I'm forcing the character to do something they wouldn't do. In my outline, I write generally what is to happen, but I let the dialogue simply flow.

What advice would you give other writers?
Wow, that'd be for an essay since I used to teach creative writing as well. But the most important advice probably is: Keep writing. Don't stop and don't give up. We all need to write a lot to get better. There are no short cuts. And don't get stuck overthinking some sentence or paragraph. Just write it somehow, you can always fix it later.

How did you decide how to publish your books?
In the Czech Republic, I have traditional publishers (two of them, one for my space operas, one for my alternate history books), when I started, it wasn't much of a question, the indie way isn't viable even now in the Czech Republic. The market is too small. Plus I'm satisfied with both of my publishers so I don't need to change that.

When I had my books translated into English, I decided to go the indie way. But I did write stories for traditional publishers and so these things aren't mutually exclusive.

What do you think about the future of book publishing?
I think the indie publishing is changing the market, there are no gatekeepers and authors can have more freedom. But I believe the traditional publishers will still be here, the indie books would became the new slush pile. If an author is successful as an indie, they may get an offer from a big publisher who'd offer them better deal. That happened several times, for example with Andy Weir's Martian.

What genres do you write?: Sci-fi / Space Opera