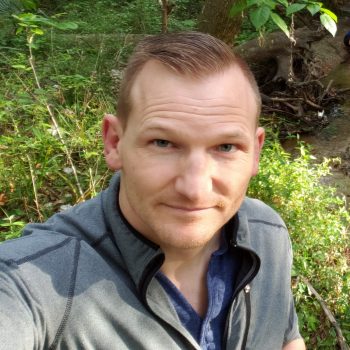 About J.R. White:
J.R. WHITE has been a sailor, scientist, and professional cage-fighter. As a merchant sailor he crossed the Arctic Circle, passed through the Straits of Gibraltar, witnessed sea monsters, and participated in a helicopter rescue atop the tallest cliff in Scandinavia. He has worked as a research scientist studying gene therapy for two major universities and spent four years as a professional mixed martial artist. As a civilian contractor he spent three years at Fort Leavenworth, KS, where he taught hand-to-hand combat to personnel from every branch of the military and over ten allied nations.
A father, adventurer, and military spouse, White and his family have lived in eight states from coast to coast in their nomadic journey as an Army family.

What inspires you to write?
I want to tell the kinds of stories that I would want to here. My first love for reading came from the simple excitement of entering a new world, meeting strange and exciting characters, and riding along for an adventure. Now with my writing, I get to create those worlds and the things living in them. I firmly believe that in a world that’s awash with quick-hit entertainment, there is still room for the imagination-driven pleasure of a good book. Before the days of constant smartphones, the thing you pulled from your back pocket in the quiet moments was a dogeared paperback. The chance to provide that for people is part of what inspires me to write.

What authors do you read when you aren’t writing?
I love a lot of the old school pulp authors like H.P. Lovecraft, Robert E. Howard, and Robert A. Heinlein. I'm also a big fan of Louis L'Amour. Among modern authors, I really enjoy Douglas Preston & Lincoln Child, both as collaborators and in their solo work. For adventure, I turn to Clive Cussler, and for science fiction Michael Crichton is hard to beat. I also love the hard-bitten action heroes of Stephen Hunter.

Tell us about your writing process.
I'm part-way between a plotter and a pantser. I outline the bones of the plot on a legal pad before I start a new book, but I don't consider myself bound to it. I always have big plot points mapped out ahead, but the path between them is definitely "seat-of-the-pants" territory. I find this approach really fun, because I get the assurance of mapped points, but also the excitement and challenge of playing by ear.
I generally never do character sketches, but let their traits appear organically as I write them into a situation. As a result, sometimes characters will surprise me, which can be both challenging and a ton of fun.
I also like to quick-edit chapter by chapter. When I finish writing a new chapter, I always go back and proofread it before starting the next chapter. This let's my get a full run of proofreading done before I start my "Big" proofreading and editing run-through of the finished draft. After that, it goes out to my proofreading team in paperback format, because I really love the red-pen-on-the-page approach to editing.

For Fiction Writers: Do you listen (or talk to) to your characters?
I'll sometimes become a participant in discussions between characters, and then I assign my dialogue to whatever character would hold the same opinion. Other times, I listen in of their conversations and gauge whether what they're saying fits with the scene and the motives of the character.
Yes, I know, I'm technically just talking to myself, but somehow it works.

What advice would you give other writers?
Get something on the page. Once it’s on the page, you can mold it and change it and do whatever you want, but it’s not writing until something is on the page.

How did you decide how to publish your books?
I had a very busy lifestyle prior to the pandemic and was looking for a "traditional" literary agent to do most of the legwork on getting my books out to potential publishers. However, when the world went all cockeyed back at the end to 2019, I decided to take the plunge myself. I just took a look around a realized it was time to stop waiting for someone else and take the next step.
I began self-publishing, and so far, it's been an extremely satisfying adventure.

What do you think about the future of book publishing?
I think we'll see massive growth in self-publishing as the tools to do so open it up to an ever-widening group of writers. This will cause wide ranges in quality that may suppress the reputation of self-published authors but will also allow new formats in storytelling to arise that the traditional publishers wouldn't take the chance on. Ultimately, there will be even more material for readers to enjoy, and an open playing field for authors who are willing to do the work and turn out quality stories.
I also think we'll see even more emphasis on audiobooks as people look for forms of entertainment they can enjoy will multitasking. I regularly enjoy an audiobook while driving, cooking, cleaning up around the house, or on the rowing machine.