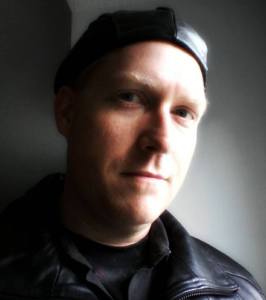 About J.P. Sloan:
J.P. Sloan is a speculative fiction author … primarily of urban fantasy, horror and several shades between. His writing explores the strangeness in that which is familiar, at times stretching the limits of the human experience, or only hinting at the monsters lurking under your bed.

A Louisiana native, Sloan relocated to the vineyards and cow pastures of Central Maryland after Hurricane Katrina, where he lives with his wife and son. During the day he commutes to the city of Baltimore, a setting which inspires much of his writing.

In his spare time, Sloan enjoys wine-making and homebrewing, and is a certified beer judge.

What inspires you to write?
I suspect it’s a pathological thirst for attention, coupled with a jester’s mentality. I yearn to entertain… and that doesn’t necessarily mean I tell jokes and juggle flaming chickens. I enjoy transporting readers, mentally and emotionally. When I spend too long without writing something new, I feel as if life become leaden, stony, implacable. Writing makes life more enjoyable!

Tell us about your writing process.
I’m most certainly a “plotter.” By the time I’m ready to start pre-writing in earnest, I already have a solid sense of my story. I flesh out a plot outline skeleton, then snowflake that skeleton out into individual scenes. I’ll often diagram a “Plot W” to make sure I’m navigating key turns in the plot. I then break out each scene into its own worksheet, solidifying the time, continuity, and ensuring each scene has its own rising and falling action… and that it justifies its own existence toward the overall plot.

Then I start writing. I plow forward, never stopping to edit until the first draft is done. This usually takes two to three months for a novel… slightly longer for a short story. I’ll give a first draft a couple weeks to air out the “stinky cheese smell,” before taking a revision pass or nine.

Once the manuscript is in a reasonable shape, I’ll hand it over to beta readers for outside input. I might make revisions per their comments, and repeat the process with more readers. At some point I throw my hands in the air and just submit the damn thing and move on to the next project.

For Fiction Writers: Do you listen (or talk to) to your characters?
I honestly don’t break out my characters in a pseudo-psychotic manner. They’re extensions of my narrative. Sure… from time-to-time they’ll hijack my plot outline, and I’ll respond accordingly. Usually with a spray bottle or a rolled-up newspaper.

What advice would you give other writers?
Keep writing. Keep reading. Try not to edit what you write until you’ve finished a first draft, and remember that the first draft is meant to be rough. Break out of the habit of assuming that everything you write must be brilliant. It just needs to be written…

How did you decide how to publish your books?
I shopped the first book of the Dark Choir series to literary agents, and received several requests for fulls, though ultimately failed to secure representation. I then made the decision to self-publish, acquired professional editing and book cover artwork, and launched it myself. I then wrote the sequel and nearly brought it to fruition before a small press, Curiosity Quills, requested both manuscripts for consideration. They signed my series shortly thereafter, and I’ve never looked back!

What do you think about the future of book publishing?
I think no one really knows that the future of publishing will look like. I feel that, ultimately, both the control and the responsibility for distribution will slip slowly into the authors’ hands, and the successful professional models will adapt to make the authors’ lives easier.