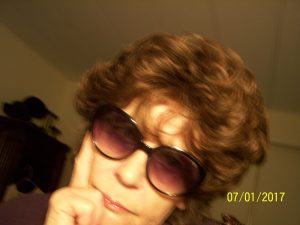 About J. Carol Johnson:
I really can’t tell you too much about myself. Not that there isn’t much to tell but because I told a good deal of this in my book. (However, there’s still a whole bunch more.) Since several of the others included in this story are still alive and roaming about seeking those whom they may devour, I need to remain anonymous. They may not value my life but I still do—at least during the recent past years. I say this because of the bipolar disorder and manic depressive illness, as well as the epilepsy, with which I batted from then on. Through the right combination of medications and NAMI (the National Association for Mental Illness) I was able to get control of this and the PTSD under some sort of control.
However, during the years that it ran rampant I self-medicated with alcohol, resulting in becoming addicted to it along with the pain pills I took to ease the pain from several broken bones. This didn’t happen all at once. No-o-o, I just had to spread that over several years, one fall at a time, one car wreck at a time and a tumble or two down the stairs. Needless to say, I didn’t hold my liquor any too well. But after the five surgeries on just one leg, I got to thinking… well, maybe booze wasn’t the answer, although AA was—which led me to NAMI.
Through these people, and my Higher Powers, I was able to get down on paper (so to speak) this book that has been nagging at me for decades. Now I feel much better. And I do hope you enjoy what I wrote just for you.

What inspires you to write?
I started out long,long ago reading the Nancy Drew Mysteries. By high school I was well into Dickens, Longfellow, Browning, Hemingway and Poe. In the more recent years I've read Mario Puzo, and Jackie Collins because I was told that my writing style is much like hers. After a reading a couple of her books I thought, "Nah, mine is much better."

Tell us about your writing process.
I feel that God has given me a prolific imagination that I can use having had a longevity of drama and trauma, joy and hope, disappointment and despair, fun and laughter, heartaches and body aches and then love gets thrown in there someplace. I get an idea running through my mind and roll with it. I go over it time after time until it gets firmly set, and then I begin to write. As I do so, the story can suddenly grow arms and legs of its own as it reaches out to here and walks over there, side-steps once or twice and then we have to have a little talk about where I want it to go. Sometimes it doesn't listen and I need to let it throw its little tantrum, knowing all along that I'm the one in control of the 'delete' button! But once we travel down that venturous road hand-in-hand I always end up with a pretty darned good story for you to read–that's if I can relinquish it. Because it really did turn out to be fantastic reading!

I get an idea running through my mind and roll with it. I go over it time after time until it gets firmly set, then I begin to write. As I do so the story suddenly grows arms and legs of its own as it reaches out to there and walks over here, side-steps once or twice and then we have to have a little talk about where I want it to go. Sometimes it doesn't listen and I need to let it throw its little tantrum, knowing all along that I'm the one in control of the 'delete' button! But once we travel down that venturous road hand-in-hand I always end up with a pretty darned good story for you to read–that's if I can relinquish it. Because it really turned out to be fantastic reading!

For Fiction Writers: Do you listen (or talk to) to your characters?
Like I said in the above, we get to really know each other. For instance, one Friday night, alone again for the weekend, I sat down to the keyboard and found wonderful company in the form of a big, muscular and ruggedly handsome ex-biker who wrecked his Harley and lost a leg. But in recovery he found the Lord through Reverend Ron (a really great guy who's a preacher from another book). Big Mac went back into the taverns to become The Barroom Evangelist. I still open the pages and talk with him to let him know I didn't forget. He said, "I know, this other book is really important to you. I'll still be here when you're ready." Now, that's what I call true love.

What advice would you give other writers?
Write and write some more! Make time, find time, get time and get into a daily routine of writing. When you feel that burning to spill your guts, make somebody laugh or cry, or a thought hits you, then write! Keep a notepad and pen with you at all times so you can jot down words that come out of nowhere. I get some brainstorms the first thing as I wake up, or perhaps it was a vibrant dream. I just lay in bed and mull that over and over in my mind until it's taken form and so I can remember it while I rush to the bathroom because by now my bladder's about to burst! Next thing, I get to the laptop to get it roughly written down. Then and only then I can have that cup of coffee and exhale.

How did you decide how to publish your books?
Rejection slips. Especially the ones that were copied and pasted onto a slip of paper that's signed by a stamp. The leader of my writing group asked if I ever wanted to get my book published. "Well, duh.., that's why I wrote it."
"Then sit down and I'll show you how." Ta-da-a!
When I read the proof copy I realized why I got so many rejections slips. It was then that he showed me how to properly write a book. Been at it ever since–and doing quite well, I must say. That only came by writing and writing.
There's a lot of junk being published. It seems that everyone has a story to write, but not everyone wants to read it. Write what you know about and especially first-hand, not by scouring the internet for things to learn. I had a friend who wrote about a boy who kept hearing voices. The teenage kid had bipolar disorder and schizophrenia. Well, in the long run the author was criticized severely. "I learned as much as I could about it," he lamented. "I didn't know anyone to talk to." I replied as gently as possible, "You could have asked me."

What do you think about the future of book publishing?
Well, since you asked, I'd say that self-pub has really kicked the trads in the tail feathers. But they seem to still be flying around, just closer to the ground so it won't hurt as much when they do crash-land. It's like everyone taking 'selfies' these days but those pics can't possibly compete with a professional photographer. As I mentioned above, there just too much junk being turned out. If there were guidelines of some sorts to weed out the bad stuff but what's bad to me is great…et cetera. I'd like to see the big trads take off their crowns and come out into the actual world to be realistic and offer a good service at a fair price–before Amazon buys them out.