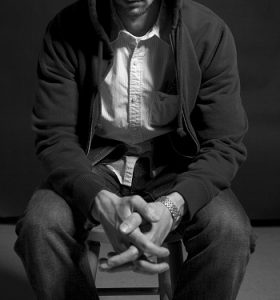 About Ian Lewis:
I’ve been writing on and off since 2002. I began to take my writing seriously in 2007, around the time I had the idea for my first novella, “The Camaro Murders.” I’ve kept at it ever since, with the subsequent release of “Lady in Flames” and “Power in the Hands of One,” both novellas. My first full-length novel, “Godspeed, Carry My Bullet,” was released in April of 2016. I don’t strive to write in one particular genre and I’m often inspired by music or something I dreamed. I’d love to make a career of writing, and even though I’ve been paid to do some ghost-writing, I still have my day job in the software industry.

What inspires you to write?
Writing is something of a compulsion for me. I think it’s a combination of needing a creative outlet and the fact that writing has always come easy. I have more ideas than I have time to write, though. Music is a huge inspiration, especially stuff that is atmospheric and moody. Really weird, abstract concepts are sometimes born out of something I’m listening to. When these concepts stick with me, they invariably find their way into a story. Sometimes it’s just an impression. For example, the effect I was going for with “The Camaro Murders” was modeled after my experience while I listened to the Coheed and Cambria albums. Each is based on a rich, interconnected back story, but of course you only get a smattering of the narrative in the lyrics. So I found myself scouring the internet trying to fill in the gaps on fan forums. I wanted to achieve a similar reaction in my readers. “The Camaro Murders” was told out of sequence with intentional gaps in the hope that the reader would dig in a little bit and think things through for themselves. The gaps aren’t insurmountable and they do leave room for some interpretation. For me that was part of the fun. I wanted to write a story that I thought I would like to read. Sometimes I dream something that after waking sticks with me and won’t die. The group of violent teenagers in “Lady in Flames” was one such idea.

Tell us about your writing process.
When I first began writing, I started out with short stories and let things develop very organically. Though I still advocate for some amount of organic development in a story, I’ve found that outlining is indispensable when writing a full-length novel (or even a novella for that matter). An outline allows you to build out a framework or skeleton for your story. It becomes a road map that lets you know where your characters need to be and what they need to do to get there. Once I have the general idea for a story (it usually amounts to a rough idea for a theme, or certain characters, or one or two key scenes–something very abstract), then I outline in a Word document. I write one paragraph for each chapter that describes what the view point character should do in each. Then when it comes time to write, I only need to plug in the details, which is where the organic part of the writing comes in. It’s almost like being given a prompt. You take an idea and run with it. I generally have a separate document that includes my cast of characters, though this is mainly a benefit for my critiquing group.

For Fiction Writers: Do you listen (or talk to) to your characters?
Not in the sense you’re asking, no. However, I do try to “get into their heads” so to speak. This is especially true when writing from first person point of view. I want to think things through the way he or she would; I want their speech and mannerisms to reflect who they are.

What advice would you give other writers?
Join a critiquing group. This is the single most important thing I’ve done as a writer because it’s helped me improve my writing more than anything else. Regular participation in a critiquing group inspires and motivates you to write. Once you begin submitting something of length, you’re committed to seeing it through and completing your manuscript. Month to month (the interval at which my group meets) you’ll work at it, picking up all the valuable feedback along the way. The members of my group offer a wide array of expertise: some on grammar, some on character development, some on the mechanics of plot development, some on technical details, etc. Writing is a solitary task. Being around other writers is encouraging.

How did you decide how to publish your books?
My first three published works are all around 30,000 words apiece. The print industry isn’t too open to novellas, so I found my way into the eBook world, where shorter formats find wider acceptance. These stories were somewhat unorthodox in their own ways, but they piqued the interest of Untreed Reads, an independent eBook publisher. My latest release is a full-length novel. I decided to try my hand at self-publishing through a combination of not finding the right home for the book and my discovery of pronoun.com. I like the idea of having complete creative control and felt more comfortable with going out on my own after having been vetted by a publisher with my previous work. Pronoun is a fantastic platform that has made the process very straightforward. I’m only in my first month with them, but have been impressed every step of the way thus far. All things considered, I don’t think I would advise a new author to self-publish. The temptation is great because it’s relatively easy; however, there’s something to be said for honing one’s craft. Try the traditional route first. Get involved with a critiquing group. Take your lumps. I have some awful stuff that I tried submitting years ago that I loved at the time. I look back on it and see that it’s meandering and aimless. This is not to say that I think I’ve “arrived” or that I can’t improve. On the contrary: each story is an improvement on the previous. I continue to hone my skills as a writer. But the flip side is that the publishing industry is highly subjective. Even if you’ve written gold, it may not float a particular editor’s boat. I felt comfortable in self-publishing at this point in my career since I’ve proved to myself that I can get published the quasi-traditional way.

What do you think about the future of book publishing?
I see the print industry becoming largely irrelevant, surviving only to produce formulaic genre fiction for the lowest common denominator. The prevalence of mobile devices along with the portability of the eBook is one thing, but the openness of the indie book community has allowed fresh, original voices to break in where they couldn’t before. This combination will give the print industry a run for its money. Sure, there’s still tons of crap being written by self-published authors. But I think it’s an industry that will self-regulate, and there will be more and more tools/forums/content that will allow readers to separate the wheat from the chaff.