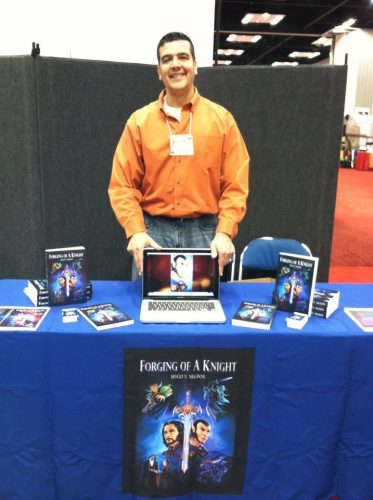 About Hugo V. Negron:
Hugo Valentin Negron is an avid fan of myths, legends, and folktales. He grew up in Illinois where he still resides with his wife and son. His background includes an M.A. in clinical psychology from Roosevelt University as well as an M.A. in industrial/organizational psychology from the Chicago School of Professional Psychology.

He enjoys reading, biking, and walking winding trails through darksome forests, searching out the mystical beings that reside therein.

What inspires you to write?
Having grown up a fan of fantasy and mythology, I took inspiration from so many great works and realized I had my own story to tell – soon the characters I created were seemingly writing themselves, and I felt I was eventually presenting their tale rather than my own!

What authors do you read when you aren’t writing?
Although I write fantasy, I have always loved the intellectual battles of Sir Arthur Conan Doyle’s Sherlock Holmes, which helped me to think of questioning things in a logical manner and not just be taken in by the passion of an argument vs. the facts behind it, and the atmospheric detail of an H.P. Lovecraft where there was such a blend of invented mythology and real life locales the reader could easily become confused on what was real and what was not if they didn’t dig deep enough – another life lesson to be wary of!

Tell us about your writing process.
I pretty much visualize the scene, the environment, as if it was a movie, and write down a vague outline on what main points need to be hit and build the details from there, hunkering down to the storyline specifics that build up towards it.

For Fiction Writers: Do you listen (or talk to) to your characters?
Definitely! Although I may have some original ideas on where to place or land my characters, sometimes they end up taking the story somewhere else. For example, I switched a supporting male knight in Book Two of the series into a female knight, not thinking much beyond that, but she literally took a life of her own, taking the storyline into a whole different area I hadn’t thought of and becoming a bigger part of the overall saga, improving it as well.

What advice would you give other writers?
Write what you have a passion for, and not just to follow a theme or fad – the honesty of your writing will definitely shine through. Also, be patient with your ideas, and take the time to hear what your characters have to say.

How did you decide how to publish your books?
I had ideas for this series for years, but never really did anything with it, thinking one day in the future when I had nothing else to do, I would get around to it. Even then, I was thinking it would be more for myself as a self-hobby to flesh out the thoughts and ideas I had been writing about since I was in grade school. My wife eventually told me to either do something with my mountain of notes and papers or just toss the mess out. At the time, we didn’t have a child, and she helped me to realize I had a certain window of opportunity in which to tinker with instead of waiting until I was in my dotage. Well, that motivational push put me in the right direction, and I started to expand my original concepts out. I opted for self-publishing as I really wasn't sure what the interest level would be, but when readers started to show that interest in the first Forging of a Knight book, I realized this was a story that other people could appreciate and enjoy. The self-publishing route gave me full control of what I was creating, and that was a strong inducement to continue the series in a like vein. Of course, that leaves the writer with all the responsibilities – finding an editor, cover artist, marketing, selling, etc. – but that's the balancing act you have to maintain.

What do you think about the future of book publishing?
I think for awhile there the assumption was that paper books, like newspapers and catalogs, were nearing their death knell. However, despite the push of ebooks and the like, there is still an interest in having that tactile reading sensation – something you can touch and smell. Even with ebooks and the rise of audio books, I don't think they will be going away any time soon, although to what degree they will be carried/maintained in the marketplace, your guess is as good as mine!

What genres do you write?: Fantasy, Action & Adventure