You are here: Home / Interviews With Authors / Interview with Author – Hank Kirton @HankKirton 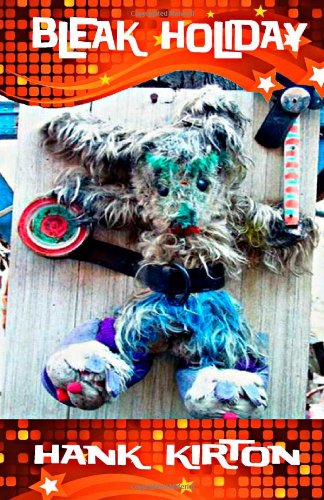 Author Bio:
Hank Kirton was born in a bowling alley in Tarweather, Nebraska to Stan and Estelle Rosenblatt who, after taking a look at what they’d created, immediately gave him up for adoption. In 1969 he was reluctantly adopted by Mary “Moonbeam” Hutchens and Robert “Riverbed” Garcia who lived in a Northern California nudist commune called, `The Stark-Naked Nude Natural Habitat for Humans.’ They named their new son, Shellfish Abalone Johnson. It was at this point that his personality began to shift and fragment into something resembling a bowl of cheese curd. Small at first, young Shellfish began to slowly grow larger and soon discovered the painfully convoluted works of Renaissance poet Giovanni “The Anus” Bloccichelli. Inspired by Bloccichelli’s insane, undecipherable verse, he vowed to one day become a mentally ill Italian poet. This ambition eventually gave way to a new obsession: carpet samples. It was at this point that he legally changed him name to Glen Butterworth and moved to Boise, Idaho. Taking a job as a podiatrist’s assistant, Butterworth began writing modest prose in his spare time. His first story, `Confessions of a Mute Suntan’ was rejected by over 700 literary journals and a prosthetic-apparel company. Undaunted, he began work on his first novel, `Endless Mormons.’ He also began stalking the only woman in his life, (ever); Rosemary Paprika, an albino graduate student at Boise Community College who had just completed her thesis on the relationship between Heidegger’s, `Being and Time’ and a Morton chicken pot pie. They were soon married. Then a bunch of other stuff happened and they now live in Aspen, New Jersey with their daughter, Leon “Leon” Redbone and their cats, Kemper, Dahmer, Bundy and Mittens.

What inspires you to write?
The pure essence and joy of writing cannot be parsed and analyzed like coleslaw. The vigorous, confident writer must find his or her inspiration from the ordinary things in life. The miraculous boredom one feels among the flowers and trees. The smile of a friend you wish you’d never met. The lubricated condom gathering dust on the nightstand. Hey, how long do those things last anyway? They do expire eventually, right? I don’t know, it’s looking a little brittle. I think I’d be scared to use it at this point. Not that I’ll get the opportunity anytime soon. Talk about a dry spell. I could rent my penis out as a doorstop. But I digress. It is in these small moments that the vigilant writer can find a wealth of inspiration. And that’s the only wealth he’s gonna get.

Tell us about your writing process.
I think it was Anthony Trollope who said, “Sometimes writing totally blows.” My own writing habits are simple. I write on an old manual typewriter in red ink on Bounty paper towels. In writing, absorbency is key, especially with fiction. I also find it’s helpful to dress as your characters. For example, yesterday it took me six hours to transform myself into a Geisha to work on my “erotic” novel, `Rikki Rickshaw and the Limber Businessman’. There are no rules to writing, really. I don’t work from an outline or make notes. However, when I experience “writer’s block” I sometimes soak in a tub of warm oatmeal. Schopenhauer called this, “Oozing the Lucid Muse.”

For Fiction Writers: Do you listen (or talk to) to your characters?
I interact with my characters by taking mean-spirited, cheap shots at them. Fortunately, I make all my characters complete and utter assholes, so it’s a bit like shooting fish in a barrel. Which I do on my day off.

What advice would you give other writers?
Write what you know, not WHO you know. Know what you know not what you’d LIKE to know until you know it. To know you know it is to know it. After that anything is possible. Even Sara Palin.

How did you decide how to publish your books?
I felt the world was ready and the time was ripe to unleash the mighty “Hank Kirton Experience.” At first I was going to do it with Pez dispensers and crepe paper but then decided, “Hey! I know what! I’ll make books or something!” And voila! Here we are, twelve cases of beer later.

What formats are your books in?
Print