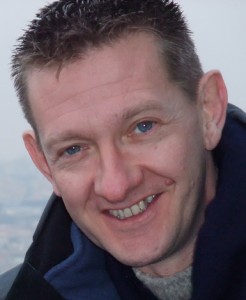 Author Bio:
Guy Pettengell was born in in Hertfordshire, England in December 1965. After leaving full time education he obtained a professional qualification in purchasing and supply management, going on to build a successful career in both the private and public sectors. But despite winning a number of high profile awards for his work in procurement, he grew increasingly aware of the one thing he wanted to do above all else – write.

One of his greatest influences during his formative years was his training in the Martial Arts. He began training when he was just 11, teaching from the age of 19 before obtaining his 5th Degree Black Belt in 1998 and still trains today.

Guy is happily married and lives with his wife, Helen, in Cambridgeshire where he spends as much of his free time as possible writing. Initially conceived as a screenplay, before being written as a novel, Dominant Species is his first published book.

Guy also loves spending time with his wife in America and you will see this influence throughout his books from the setting of Dominant Species in New York, to the hotter nights of Miami where his next novel, due in the summer of 2014, is based. Retribution is the first in a new series of books starring Jack Vincent, a man with a dark and sinister past.

Guy’s next novel, due in the summer of 2014, promises to be very different:

What inspires you to write?
Everything! I love writing and always have; although for many years I think I forgot that one simple truth. For me writing is magic… word alchemy if you will.

The ability to create is probably the driving force behind my love of writing – a chance to create and breathe life into characters who will tell their story, hopefully in a way that engages with the reader, all whilst creating a fictional environment in which the reader can become totally immersed.

My wife jokes (well I hope she’s joking) that it sounds like a need to control, but in reality sometimes I don’t always feel ‘in control’ of my stories, or my characters for that matter, it’s as if they get a life and voice of their own and in that are able to make their own decisions and choices, taking the story in their own direction. Even when I know how it’s supposed to end… I often look forward to finding out how we’ll get there!

I sincerely hope you do too, but above all, I hope you enjoy and gain some pleasure from the words I place on a page.

Tell us about your writing process.
Once I have an idea, I always start with a general outline, a road map of the story if you will. I do have software, but tend to be a bit old fashioned and mostly use pen and paper. Then I think about who’s going to tell the story and how. I write a brief character sketch, but I don’t like to plan too much as I like to let the characters run with their own voices and choices. Sometimes they surprise me. In truth although I know (roughly) how the story will end, I often look forward to finding out how we’ll get there!

When I’m writing, I don’t stop, don’t go back if I can help it until the flow has finished – often I re-read what I’ve done and am pleasantly surprised – often I think, ‘oh wouldn’t it be good if X happens, only to find out that I’ve already written it that way – I suppose some of the writing must be subconscious.

For Fiction Writers: Do you listen (or talk to) to your characters?
I often speak the words out loud, become the character (but I don’t put on different voices – honest!)

What advice would you give other writers?
Write – pure and simple. Just do it.

How did you decide how to publish your books?
I started writing screenplays and had some ‘almost successes’. But as they say a miss is as good as a mile. So I had some material piling up. I knew I liked writing, liked the creation and liked the process, but wasn’t sure where to turn next. I thought why would anyone buy into a non-published author? Then I looked at self-publishing and thought: I can do this and maybe if I get some interest, someone out there will see my work and give me the break I need – so that’s exactly what I did.

What do you think about the future of book publishing?
Yes, often. And you know what the more I think about it, the more I see eBooks as a bigger part of the future… and something I want to be a part of.

What genres do you write?
Horror, Fantasy and Action / Thriller.

What formats are your books in?
eBook, Print