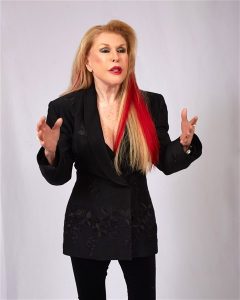 About Georgene Summers:
What You Should Know About Georgene Summers!
California girl Georgene Summers is a born entrepreneur with a wild streak in her that just won’t quit. An Adventurer, Author, Talk Show Host, Wild-Life Photographer, Strategic Intervention Change Coach, Marriage & Relationship Coach, Know Your WHY Coach, Inventor, Businesswoman, Fashionista, and sometimes whirling dervish the wildly animated Summers seems to have done it all.
Georgene spent several highly successful decades in the fashion accessories business between Los Angeles and New York City when she finally decided to embark on a variety of new careers in rapid sequence. Several years on Wall Street as a Commodities Associate proved to be rewarding but stressful for the creative Summers. In the early 80’s she left Wall Street to build a nightclub in midtown-Manhattan the likes of which had never been seen in the city before.
Summers, always just slightly ahead of her time built a 15,000 square foot club that became the “home away from home” for models, chic “Euro trash” and celebrities galore. The club, called Bolero, prided itself on privacy and chic decadence and hosted many hot and happening parties which celebrated stars like Mary Wilson of the Supremes, the wild and wonderful Grace Jones, the original Village People, the late Andy Warhol and Lifestyles guru Robin Leach.
Not one to say no to anything she plunged into her next re-creation with a vengeance and started two businesses, one in telecommunications and the other inventing two fitness related items. She currently holds two patents. Since 1996 she has been traveling to Africa, going on safari alone with only her Masai guide Hagai as company. Content on her own dining out in the middle of the Serengeti by the light of a candle or rising at 5 am to the sound of the baboons in the trees outside her campsite she loves traveling into the bush to photograph all of the animals and has now decided to offer her photographs for sale on her website.
In 2002 Georgene made a decision that would change her life as she knew it. She moved to Africa alone.. As part of a self-funded Humanitarian Project Georgene started working with Xhosa tribeswomen teaching them how to make commercially viable beaded cellphone bags. . In 2004 after deciding to return to America with her three little dogs she accidentally met her soulmate. In the middle of South Africa the beautiful Georgene would meet that special man in the form of a humble, modest and good looking guy she calls her Prince. Her life would change dramatically as they moved from friends to husband and wife New Years Eve 2004. Her formula for relationship success was proven once again.
Since then the enigmatic Summers has been traveling back and forth from Africa to the states working with him to bring focus to the project that has been near and dear to his heart…Bugz a Humanitarian project. Not one to stay still for long and with her telecommunications business slowing, Georgene took another leap off the cliff and went back to school to study with renowned Motivational Speaker Tony Robbins at Robbins Madanes Institute. In only 90 days she graduated with commendations and is now a Certified Strategic Intervention Coach and Marriage & Relationship Coach on a Mission. Just Ask her and she will excitedly tell you how she intends to “Empower and Inspire Women with Hope, Courage, Confidence and the Tools to live all of their dreams and realize their fullest potential for growth and greatness.” Leading Seminars, Boot Camps and Retreats Georgene brings amazing tools for change to any event. Getting Rid Of Limiting Beliefs and Fears, Challenge for Change, Who are You and What Do You Want, Change Your Perceptions and Change your Life are just a few of the topics she covers. You won’t want to miss a moment of her inspiration.
Georgene is an accomplished Author who has penned three incredible books on relationships…”The Dating Dance…Confessions of the Spider and the Fly” and “No One Moved Your Cheese and her most recent one Blind Spots: The Ultimate Guide To Love In The Dark.”
She has also written several poetry books and two screenplays. Georgene is currently working on a Childrens Book about her many African animals entitled “Henny Penny Featherhead and the Band of Bunnies.” She supports orphaned baby elephants through the amazing Daphne Sheldrick in Nairobi, Kenya and is working with her guide on an educational project to stop female genital mutilation among the Masai by sending the young girls to boarding school. What’s next for Georgene? She is collaborating with her husband Paul on an Art Therapy Program called Outside the Lines promoting change through Coaching, Creativity and Color.
Georgene recently hosted an edgy wildly popular Talk Show on Voice America the largest Talk Network in the world “On The Edge With Georgene Summers” where she can literally change women’s lives one woman at a time or maybe even 100 or 1000. That is what makes her do a happy dance.
The format itself pairs Georgene’s amazing, motivating topics with the empowered and empowering women she interviews.

What inspires you to write?
I am inspired by my own personal experiences to share those moments of great joy, sadness, elation, discomfort, love and all of the array of emotions with people around the world. I have lived a life filled with many challenges and hope that my truths will resonate with readers everywhere.

Tell us about your writing process.
I just allow myself to be open and then think about some of the amazing life experiences that I have enjoyed. I sit down and write the first line and then off I go. It’s a great adventure that I love to share. I am not an outliner but rather more of a let’s go with the flow and let it explode into a life of its’ own.

For Fiction Writers: Do you listen (or talk to) to your characters?
I listen intently. I am in the room with my characters and I ask and listen and get a sense of how they would respond.

What advice would you give other writers?
The road to success begins with the very first step. Give your book a title…that gives it life. You can always change that working title if you wish but that gets you off the starting line.

How did you decide how to publish your books?
I believe that success comes from finishing a project and for me that was publishing the books either in hard copy or on kindle or both.

What do you think about the future of book publishing?
I believe there is always going to be a place for real page turning books. There is no substitute for holding that book in your hands and turning the pages.

What genres do you write?: Romance, Liteary Fiction, Teen and Young Adult, Adult, Relationships, Self Help