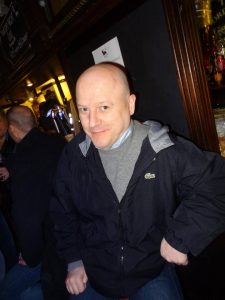 About Geoff Small:
Of all the cities I’ve ever visited in the UK or on the continent of Europe, it’s only when I walk the streets of Glasgow that I truly feel as if I’m on the set of a film noir movie; its looming sandstone tenements with stoops leading up to Spanish-tiled closes; the sharp-cornered grid plan of its city centre like a mini New York straddling cascading hills that could be in San Francisco, bisected from east to west by vanishing point alleyways. To me, this city and its unique atmosphere are like a moreish hard boiled sweet that I just can’t stop sucking. And that’s why, even though I come from the Midlands of England, I just had to set my novels here, desperately trying all the time to recreate and transmit the feeling I get from this amazing spectacle of a town to my readers. In the same way that I am infatuated with the city of Glasgow, I have now become addicted to a character I have created who walks the streets there. When I first began writing DCI Pat Curzon – AKA the Dirty Rouge – it was intended as a bit of fun, the outcome a novella called the Dirty Rouge that would serve as a one-off homage to Glasgow and the noir genre – or so I thought. But here I am, releasing Whisky Leaks, book 3 in The Dirty Rouge detective series, following on from A Long Walk In The Snow, a full-length novel. It’s a cliche, but I feel as if I haven’t chosen DCI Curzon so much as Curzon has chosen me. I think we’re probably attached forever now, with me destined to follow him around the evocative streets of Scotland’s largest town until the end of time.

What inspires you to write?
I must confess that, although I have read many many books in my time, the things that most inspire me to write are when I watch a good film or a documentary about artists, whether they be writers, painters, musicians etcetera. Another thing that really get’s my creative juices flowing is when I travel to new places, ideally walking the streets of a strange city, just me and my streams of consciousness like a flaneur. Although films, documentaries, travel and walking inspire me to create, it is only reading and the ideas that are found in books that can bring any substance to that inspiration.

Tell us about your writing process.
I think thinking is the biggest part of the writing process. Theoretically, somebody could write a first draft of a novel in the length of time it takes them to type one. So, for an office secretary it would probably take a couple of hours. But it could have taken a decade just sitting around and thinking about the things that actually go into her novel. So, first part of the process is invisible. It’ s the bit sat watching TV, reading papers, books, going on walks. Then, I take a pen and a few A4 pads and I just write and write and let everything just spew out in longhand. Once I’ve finished this part – the most enjoyable part in my opinion – then I type the whole thing up as is on the computer, before reading and re-reading it about a thousand times, editing and amending as I go.

For Fiction Writers: Do you listen (or talk to) to your characters?
I don’t listen or talk to my characters so much as float above them, in my case following Pat Curzon around the Glasgow of my mind. He’s in my mind up to no good all the time, I’m just his biographer.

What advice would you give other writers?
I don’t believe I’m in a position to give advice to to other writers because I’ve so much to learn myself. But what I can say about my own experience is that the more I write the better I become and so that in itself is a reward for sticking at it.

How did you decide how to publish your books?
I’m fortunate enough to live in an era where you know that you WILL have your work published, thanks to e-books, kindle. Publishing on kindle format wasn’t a choice, it was the only option really. I’m happy to say that Whisky Leaks will be available in paperback soon, with the other books in the Dirty Rouge series soon to follow.

What do you think about the future of book publishing?
I think books will carry on being published in hard copy as they always have been. As somebody whose self-published through e-books, though, I worry that the current formats might become obsolete and that we’ll all be expected to republish through some new medium in future. I have no evidence that this will actually happen, but I’m just a worrier and we all know that things move really, really fast now don’t they.

What genres do you write?: Crime