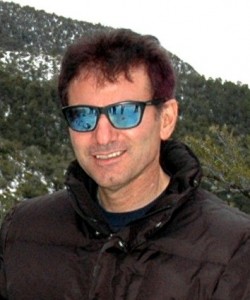 About Frank Scozzari:
Frank Scozzari was born in Bay Shore, New York. He moved to California as a child, where he attended and graduated from Cal Poly, San Luis Obispo. He now resides on the California Central Coast. An avid adventurer, he hobo’ed his way across America at age eighteen, twice trekked the John Muir Trail, backpacked through Europe, camel-backed the ruins of Giza, jeep-trailed the length of the Baja peninsula three times, globe-trotted from Peking to the Paris, on to the White Nights of northern Russia, and once climbed Mt. Kilimanjaro – the highest point in Africa. A four-time Pushcart Prize nominee, his award-winning short stories have appeared in numerous literary magazines including The Emerson Review, Berkeley Fiction Review, Tampa Review, War Literature & the Arts (U.S. Air Force Academy), Pacific Review, Eleven Eleven, The Bitter Oleander, South Dakota Review, Minetta Review (NYU), Hawaii Pacific Review, Ellipsis Magazine, The Nassau Review, The MacGuffin, Reed Magazine, The Broken Plate, Roanoke Review, and Short Story America, and have been featured in literary theater.

What inspires you to write?
As it is I think for most artists, life in generally is my inspiration. What we see, what we hear, the people we meet, the stories we are told; are all fuel for the creative process. Before you know it, you are writing.

Tell us about your writing process.
I’ve written in many different ways. Sometimes I get an idea and start to write and don’t know here the story will take me; sometimes I have the story completely worked out in my head; and sometimes I only know the ending and work backwards.

For Fiction Writers: Do you listen (or talk to) to your characters?
I never listen to nor talk to my characters; I follow them. Sometimes I feel I’m the steward of their voice. It is I who must bring them to life and allow them to find their fruition.

What advice would you give other writers?
Always carry a notepad. If you have writers block, just start writing. Even if the writing is bad soon the ideas will begin to flow, as will the words.

How did you decide how to publish your books?
I don’t know much about the publishing world. I just submit my stories and if someone wants to publish them, I go with it.

What do you think about the future of book publishing?
I love to hold a real book in my hand, but I think the future of books leans in the direction of the digital market. Illustration will likely someday be three dimensional.

What genres do you write?: Adventure, thriller, and romance, but mainly literary.