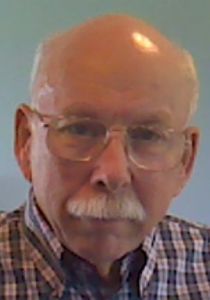 About FJ Harmon:
I was born in Detroit, Michigan struggled working my way through college and kept a jump ahead of the draft board by joining a Naval Reserve Officer Corps program. The net result was that in the summer of 1968 I graduated from college, got married and went onto active duty. My Naval Intelligence career began in Washington, D.C., where we remained for the next thirty-six years. After my initial tour of active duty, I stayed in the reserves and pursued duel careers as a Naval Reserve Intelligence officer, and national intelligence technical analyst working for Naval Intelligence, the National Security Agency, Central Intelligence Agency and Defense Intelligence Agency. Until 2007 my writing was confined to technical documents, position papers and contract proposals, not exactly the stuff of fiction. My urge to write fiction was kept on the “back burner” until my retirement in 2007, when looking for something to do with my time I was inspired by a proposal by the state of North Carolina to build a deep-sea port between a nuclear power plant and a nuclear arms depot. It struck me that this scenario presented an ideal target for terrorist action. The next six years were devoted to research and honing my fiction writing skills and my first book was born. I currently write for a local magazine in St. James, North Carolina, Cat-Tales, and I am working on my next books.

What inspires you to write?
“What if …” ideas grab a hold of me and I can’t stop thinking about them until I have written about them. My first book “Revenge For What Is Sacred” it was the idea that the state of North Carolina wanted top build a deep water container ship port between a nuclear power plant and an arms supply depot. It struck me that it would make an ideal terrorist target. For my second book, it was the idea an identity thief stealing the identity of a hunted criminal. This was not the story of my second book, but it led me down the path.

Tell us about your writing process.
I write a lot of backstory for my characters so I can get into their motivation, and of the events that lead up to the point where my story begins. I find it is much easier to detail the plot line if you understand the motivation behind the story.

For Fiction Writers: Do you listen (or talk to) to your characters?
Yes I do. I sketch the scene and then let the characters tell the story by letting my myself write whatever comes to mind. That is when my characters take control of the scene, frequently surprising me.

What advice would you give other writers?
Write, revise, critique. Keep on writing until you can hear your characters. Then listen to them for your story.

How did you decide how to publish your books?
I had little to no platform, so I felt trying to convince an agent to convince a publisher was a waste of time. No matter who published my book I knew I was the one saddled with the task of marketing. So I went the self-publish route with CreateSpace. For me it was a quick, efficient, and pleasant exercise.

What genres do you write?: Fiction, Suspense, Thriller, Mystery