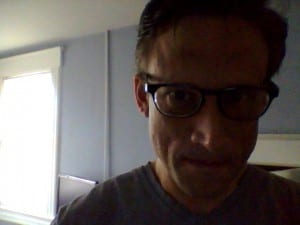 Author Bio:
Eric Robert Nolan graduated from Mary Washington College in 1994 with a Bachelor of Science in Psychology. He spent several years as a news reporter and editorial writer for the Culpeper Star Exponent in Culpeper, Virginia. His investigative work has also appeared on the front pages of numerous newspapers and local magazines in Virginia, including The Free Lance – Star and The Daily Progress.

Eric entered the field of philanthropy in 1997, as a grants, public relations and speech writer for nonprofit healthcare organizations. His feature writing included articles in Vim and Vigor Magazine, and Eric designed and taught curricula for grant writing training courses for healthcare professionals.

Eric’s debut novel is the postapocalyptic science fiction story, “The Dogs Don’t Bark In Brooklyn Any More.” It was published by Dagda Publishing on November 19th, 2013, and is available at Amazon.com both in paperback and for Kindle. This will be the first of a series of books entitled “The Wolf War Saga.”

Eric’s poetry and short stories have been featured by Dagda Publishing, Every Day Poets, Every Day Fiction, Illumen, Dead Beats Literary Blog, Dead Snakes, The Bright Light Cafe, The International War Veterans’ Poetry Archive, and elsewhere. His poems were also included in anthology format in Dagda Publishing’s “Threads” in September 2013. Eric’s science fiction/horror short story, “At the End of the World, My Daughter Wept Metal,” was published in January 2014 in Dagda’s short story anthology, “All Hail the New Flesh.”

What inspires you to write?
I honestly can’t remember a time when I wasn’t telling stories. I grew up in a working class Irish family in New York, and poems and stories were a big part of the culture. For as long as I can remember, I was making up my own.
I have always felt as though I’ve carried stories around with me: characters, situations, images, sounds, smells and dialogue. It’s like a movie projector up there, and I try not to trouble myself too much about figuring where the reels come from.

For Fiction Writers: Do you listen (or talk to) to your characters?
My characters do not speak to me, but I indeed listen to their thoughts, and I listen to them talking to each other.

How did you decide how to publish your books?
I was very fortunate in that I’d gotten acquainted with Dagda Publishing in the United Kingdom. This is a publisher with a firm commitment to supporting new and emerging writers. After Dagda published a few of my poems, I naturally turned to them when I was nearing completion of my first novel.

What do you think about the future of book publishing?
Well, I won’t feign any real expertise here, but I do know from my own experience that opportunities abound for new writers. It is an exciting time. There is a proliferation of small presses and online publishers that makes it easier than ever to find a market for your work. The more established major publishers are no longer the gatekeepers that they once were. (And this isn’t even broaching the subject of greater numbers self-publishing opportunities.) I expect these publishing arenas to grow further, and attract greater numbers of readers.

What genres do you write?
Horror, Science fiction