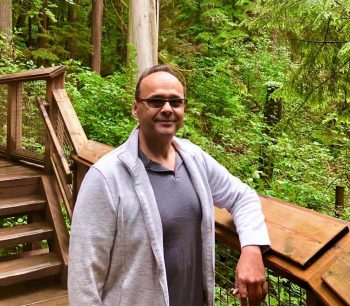 About Erasmo Acosta:
Erasmo Acosta was born in Cantura, Venezuela, and moved to the United States in 1996 to pursue a software engineering career, sponsored by a small Silicon Valley company. He retired to Portland, Oregon, in 2020 after achieving 32 successful years in the industry. In 2015, Acosta became interested in the implications of the Fermi Paradox as it relates to the prospects of finding another civilization in the universe. Further research into Futurism, upcoming technologies, and the works of American physicist Gerard O’Neill, led him to write K3+. The dystopian novel explores human migration, triggered by inequality and climate change, to rotating habitats in space, based on many currently available technologies. Acosta tells the story of how humanity moved past the unsettling times we live in to a post-scarcity and egalitarian society—absent of fear, uncertainty, inequality, and despair.

What inspires you to write?
I watched a YouTube video that discussed both the Fermi Paradox and Dyson Swarms. It had a profound personal impact, leading me to drop some of my most deeply held beliefs. Less than two years later, after plenty of research on these and many other subjects, I started writing the K3+ book.

What authors do you read when you aren’t writing?
Isaac Asimov, Larry Niven, and Arthur Clarke are my childhood heroes. I make references to them throughout the story. J. K. Rowling had a different kind of influence. Ever since reading the Philosopher’s Stone—I read all seven books many times—I was deeply impressed by her light and easy-to-digest style. The interactions between Fedrix & SueLing are an example.

Tell us about your writing process.
I write a note on my phone whenever I get an idea, so I won’t forget it. I also do a ton of research and gather plenty of resources so that my material is fully developed. When I feel blocked, I go for a walk, ask my friends, or watch something on TV. This always helps me be able to get back into my writing.

For Fiction Writers: Do you listen (or talk to) to your characters?
Both my co-writer and I, drew on personal experiences, and borrowed from others, to bring some of the characters to life. Yasmin is an amalgam of 4 different people I knew. Other char-acters are completely organic, and materialized as the narrative evolved. Kaira was inspired on a dear friend’s daughter. Len is probably the most diverse individual, due to the fact I merged two separate characters into one.

One of my early editors recommended I give SueLing more agency, so she would raise to the plot. Enzo was conjured out of the need to make Federico’s work more real. We didn’t want a single character to be “the hero”. You’ll see many of the characters throughout the story, to rise above the main character.

How did you decide how to publish your books?
My entire life I worked for personal economic advancement. Of course I helped others, when-ever I could, paid my taxes, and contributed to my favorite non-profits, but I never made a con-tribution humanity. I feel this is my opportunity to do that. As a result, I chose to publish on my own in order to share my message through the tale of the book in my own way.

What do you think about the future of book publishing?
I think more independent publishing is in the future and that we are rapidly increasing desire for digital products.

What genres do you write?: I write science fiction.