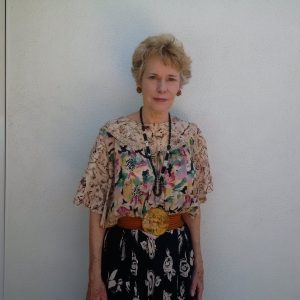 About Elizabeth Guider:
I am a longtime entertainment journalist who has worked in Rome, Paris and London as well as in New York and Los Angeles. Born in the South, I hold a doctorate in Renaissance Studies from New York University. During the late 1970’s I was based in Rome where I taught English and American literature and where much of the action of my first novel, The Passionate Palazzo, takes place. While in Europe I worked as an entertainment reporter for the showbiz newspaper Variety, focusing on the film business, television and theater. I traveled widely, reporting on the politics affecting media from Eastern Europe to Hong Kong as well as covering various festivals and trade shows in Cannes, Monte Carlo, Venice and Berlin. Back in the States since the early 1990’s, I began to specialize on the burgeoning TV industry and eventually held top editor positions at Variety and latterly at The Hollywood Reporter. Most recently I have freelanced for World Screen News as senior contributing editor. Nowadays I divide my time between Los Angeles and Vicksburg, MS, where I grew up and which is the setting for my second novel, Milk and Honey on the Other Side.

What inspires you to write?
I was inspired to write my first novel, The Passionate Palazzo, after living through a very exciting and important period of social change in Italy in the late 1970’s. I wanted to capture the turmoil taking place, some of the brave women I knew who were set on improving things — and also, it being such a romantic place, write a love story. With my second novel, Milk and Honey on the Other Side, I turned back to my roots in the South, having been, like so many people there, fascinated by the region’s past, both the good and the bad. I was particularly interested in the historical period after World War One, having heard so many tales about it from my grandmother as well as from others I knew there.

Tell us about your writing process.
I generally try to write in the mornings, usually with a strong cup of coffee nearby. Five days a week works for me and I try to do about 2,000 words a day. I try to leave the desk not when I’m stuck but when I’m in full creative flow, so that I don’t baulk at coming back the next day. In the evenings I tend to edit what I’ve come up with that morning, and if it seems to flow well, I reward myself with a glass of cold chardonnay. If not, I just put on some music — (Bach tends to inspire me) — and try to re-imagine the scenes which didn’t work.

For Fiction Writers: Do you listen (or talk to) to your characters?
Before I began either of my novels — and as I toy with a couple of upcoming projects — I did an outline, sketching out the action as far as I could envision it and trying to put a little meat on the main characters. As ideas come to me in the first phase of writing, I go back to the outline and further refine it. Sometimes I change the characters’ names or personalities a little bit to help make the plot more plausible. And, later in the process (late at night when no one is around to take me for crazy) I find myself talking to my characters or having them interact with each other. Sometimes it gets noisy!

What advice would you give other writers?
I would say to choose a subject that you are passionate about — and likely to remain so for the duration of the writing — and then reserve some psychic energy and time for the promotional and marketing phase of your effort.

How did you decide how to publish your books?
Regarding my first novel, I did not get any immediate interest from traditional publishers and I did not want to wait any longer to get the work out there. Random Penguin’s AuthorHouse was recommended to me by a writer friend, and I had a good experience there in terms of the printing, proofing, cover design and so forth. However, the marketing did not seem to me very sophisticated or helpful. (Or, let it be said, to get more advanced support from AuthorHouse would have meant considerably more money.) In the case of my second novel, I pitched it to several independent publishers and I opted for Foundations Press, both because the two owners (writers themselves) were enthusiastic and encouraging — and because they are located in the South. I thought they would be more attuned to what it takes to get the book out there. So, although I think working with a self-publishing company is fine (and no doubt some are better prepared to be helpful and critical than others), there is still something of a stigma attached. Thus, it was well-nigh impossible to get any traction from potential reviewers or local newspapers for my first effort, but less of a hurdle with my second. One newspaper editor told me they received 10 requests a day from self-published authors hoping to be interviewed, and unless there’s some compelling newsworthy reason to respond to these overtures, they just spike them and move on. I’d also like to say that I believe everyone, including myself, needs an EDITOR. Not just friends and acquaintances to read bits and pieces while the book is in progress (as helpful as that might be) but an outsider with critical judgment and commercial instincts who understands point of view, voice, character development, continuity, and narrative flow, among other things. I got much closer to that ideal with the publishers at Foundations: they paired me with a professional editor.

What do you think about the future of book publishing?
Like so many other businesses impacted by technology, I think the future of book publishing will mean an evermore democratized system, in which more and more people will be empowered to put pen to paper, but at the same time their ability to break through the clutter will become that much more difficult. In such a fragmented world, what will become more important is identifying, targeting and interacting with one’s niche audience.

What genres do you write?: historical fiction, romance