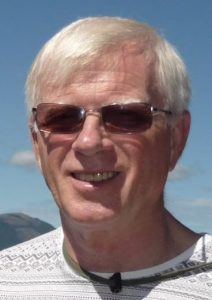 About Derek Birks:
Derek was born in Hampshire in England but spent his teenage years in Auckland, New Zealand, where he still has strong family ties.
For many years he taught history in a secondary school but took early retirement to concentrate on writing. Apart from his writing, he spends his time
travelling, walking and taking part in archaeological digs.
Derek is interested in a wide range of historical themes, but his particular favourite is the late medieval period. He writes action-packed fiction which is rooted in accurate history. His debut historical novel, Feud, is set in the period of the Wars of the Roses and is the first of a series entitled Rebels & Brothers which follows the fortunes of the fictional Elder family.
The fourth and final book of the series, The Last Shroud, was published in the summer of 2015 and Derek then embarked on a new Wars of the Roses series, entitled The Craft of Kings, and comprising so far: Scars from the Past and The Blood of Princes.
The Elders will return in the third book of the series, Echoes of Treason, in Spring 2019.

What inspires you to write?
I have always loved stories and wanted to see if I could write one. When I first started writing though, I was uncertain about what I was doing – indeed uncertain about the whole process. But by the time the first book was finished, I knew I wanted to carry on writing, Why? Because I had so many stories in my head and I just had to get them onto the page.

Tell us about your writing process.
I nearly always know exactly how my books will end, though I don't always know when they will start. I will have an outline of the story and main character development, but the rest will come as I write. For every book I use a spreadsheet which, since I write historical fiction, helps me to sort out my timelines.
Characters – other than half a dozen key characters – tend to emerge and evolve organically. It's quite common for me to introduce a character without having considered their existence at all at the start. Though I have a basic plot to begin with, I will work through any problems as they arise. Usually I do my best planning whilst swimming or walking, when my brain is not occupied with other distractions!
Whilst I use software, I'm also a little 'old school' and my desk is littered with post-it notes and research books.

For Fiction Writers: Do you listen (or talk to) to your characters?
My characters have lives of their own! I've lost count of how many times they have persuaded me to change their fate. I would think: OK, this character will be killed off… and then I rather like them so I keep them alive. Let me say that the opposite outcome is also possible! Having said that, sometimes I have to kill off someone that I – and my readers – really like and that is hard. Trust me, some readers still haven't forgiven me for one or two early deaths!

What advice would you give other writers?
The best advice I can give to any aspiring fiction writer comes in two parts. Firstly, you are writing fiction so the story is everything. If the reader is not hooked on your story then every word you write is a complete waste of time. The second part is for when you have actually finished your book. Get it properly edited, because it won't be as good as you think it is. Every author needs a good editor.

How did you decide how to publish your books?
Though I submitted my first book to several agents and had some positive responses, I was keen to get the book out there so I decided to go independent. If I was a 'thirty something' I might have been more patient, but I think it worked out pretty well for me as a self-publisher. These days it is very easy to self-publish – perhaps too easy – but at least every writer has a choice now, which is no bad thing. You have to consider what best suits your circumstances at the time.

What do you think about the future of book publishing?
There is no doubt that being an independent author is much easier than it used to be, but there are currently so many books out there that it is increasingly difficult for authors to establish themselves. Even traditionally published authors are struggling with this problem. You have to spend a lot of time marketing your work which goes against the grain a little.

What genres do you write?: Historical fiction; action and adventure