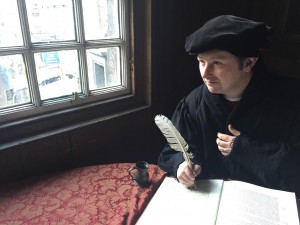 About David Little:
David Little wrote his first full length novel when he was 16. Titled “The Old Firm” it was an homage to the classic Universal horror films that he used to watch as child – but shouldn’t have really – juxtaposed with the modern, blood filled remake culture of the 80s. One person read the novel and asked if it was for adults; when Little nodded, the reader shook his head. The reader asked if it was children; when Little hesitatingly nodded, the reader shook his head again.

Undeterred, the author embarked on many years of hopeful writing, whilst battling against the crippling disease Procrastination. It was a long, hard slog and a battle that often he felt he would never win. Ideas, plots, characters and potential product placements came and went, as did a mild addiction to A1 steak sauce, but it was not until 2010 that he was able to finally complete that tricky second novel.

“Am/Dram” – the slash is important here – told the tale of murder, rain, affairs, rain, more murder and some rain, all centered around an amateur dramatic company and their production of the difficult “play after the Christmas Panto”. It has not been read or critiqued, and may stay mysterious for quite some time.

Turning his attention to writing short stories, Little found himself focusing on an idea that had been gestating for many a year; a small Scottish village that had once inextricably found itself as the Capital of that great nation and as a result seemed to harbour strange and unusual characters and events. After some soul searching, and a dalliance with A1 sauce once again, the premise of the Hope Town series was fleshed out and is running along like something that runs along quite quickly and may take quite a bit of effort to stop.

The first tale from Hope Town “The Devil’s Patissier” is due for publication on 31st October 2015. Subsequent tales will evolve over what is planned to be a 3 year lifecycle.

David Little lives in Scotland with his wife, two children, dog and a cupboard only half full of A1 steak sauce.

What inspires you to write?
Sometimes its the mood I’m in. Sometimes its the day I’m having. Sometimes its the weather. Its hard to describe what inspires me, but it always starts with an idea, a concept or a character and then it goes from there. The way the character acts, or the situation that brings one or more opposite people together or the extremely baffling but spectacularly shiny device which sits in the corner of the lab just waiting to be turned on, or just a wonderful speech that one character makes. All of these things and more want me to write about them and tell their stories and I suppose that’s what ultimately inspires me.

Tell us about your writing process.
Whether the idea comes from a character, a scene or a theme, the first thing I do is get it written down. On computer; smartphone; cool looking notebook; pad of paper; bus ticket. Either way, I get it down. Then I leave it somewhere. Perhaps its in the office, or maybe beside the stove. Often, ideas are found months later as I’m cleaning out the cupboard under the stairs. The point is, I leave it for a bit and when I come back I see if its still interesting; is there a good enough hook that I want to devote time to developing?

Then I write the outline and that can be anything from premise, to endgame, to chapter or scene beats. I keep writing it until I find I’m writing paragraphs, character sketches or more detailed pieces. Then I know I’m hooked and damn it all, but I need to write more.

For Fiction Writers: Do you listen (or talk to) to your characters?
I definitely hear the characters in my head, and thankfully they don’t usually argue with themselves. Their voices and mannerisms come through, and that helps to flesh out who they are, what they do and the nuances that make them different to each other (and sometimes alike, because some of them do get along).

What advice would you give other writers?
Read before you write. Understand what you enjoy to read first, because that’s what you’ll enjoy writing too. Write for yourself first, and if you can stand what you write then perhaps someone else will too. I’m not saying steal another author’s style, but perhaps there’s something about the way they write that you can relate to and that attracted you. Most of the time, it also attracts other readers.

Don’t start out by wanting to make a fortune (because hey, hardly any writers do). Aim to get one or two people to like what you write and take it from there.

Most of all, enjoy writing.

How did you decide how to publish your books?
I’ve wanted to be a published writer for years, but never really pursued it when I should have. Some of that was down to life, and a bit more to the horrors of procrastination. Mainly I just didn’t write enough and I when I did get up a head of steam I ended up being too afraid to get my work out there. So I set myself a challenge and that was to get something published and just keep on writing and publishing and writing and… you get the general idea. Self publishing allows me to meet that challenge head on, and it also allows me to set price and promote my books myself at the rate and intensity that I want. I think it’ll be a fun ride in the end.

What do you think about the future of book publishing?
I think it’ll be a fun ride in the end.

Wait, I just said that.

Ebooks and self publishing has created an amazing and potentially scary platform. Tens (if not hundreds) of thousands of people are using the medium and tooling to create and promote their writing and I can’t see that ever really dying away. Even if there is no market, people will still do it because we all have stories to tell and if just one person can (virtually) pick up our stories and read them and get enjoyment, then its all worth it isn’t it?

What genres do you write?: Horror. Sci-Fi. Spy. Thriller. Basically, any genre where I can add my own voice and spin. Often its a humourous spin.