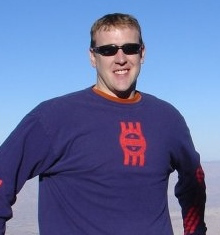 Author Bio:
Daniel Ganninger grew up in Texas and lives with his wife and two children in Central Texas. He has a fascination for useless trivia, little known facts, and flying airplanes. He graduated from the University of Texas and lived in Southern California for 9 years before returning to his home state. When Daniel is not writing, he’s either pulling weeds in his backyard or working at his other profession in the medical field.

Daniel also writes a blog of useless facts and fascinating tidbits at www.knowledgestew.com

What inspires you to write?
I really enjoy telling a good story. I want someone to escape their daily life and not be dragged down by something depressing or heavy. That’s why I try to inject as much humor in my books as possible while still holding on to a semblance of seriousness. There are enough “downer” books floating around for people to read. I want the reader to have fun, use their imagination a little, and enjoy my books for what they are–pure escapism reading.

Tell us about your writing process.
I’m definitely a “seat of the pants” writer. I have a beginning and an end to start, and I write the middle to get to the end. I have never been able to use an outline effectively. I tried and failed because the story changed so much as I wrote it; new situations would pop up, different people ended up getting shot. I did have a clear picture of how I wanted my characters to act throughout the book, but what they were exposed to was ever-changing.

For Fiction Writers: Do you listen (or talk to) to your characters?
I often ask myself, “what would you not do in this situation,” and I then write the opposite. I would say I listen to them but not talk to them (or at least I wouldn’t admit it). I enjoy getting my characters into situations they couldn’t possibly handle and then wrestling with how to get them out of it. I really don’t ask their opinion in the matter.

What advice would you give other writers?
Don’t get discouraged, don’t compare yourself to the success of others, and be persistent in your writing. I think many authors read so much advice and try to imitate what someone else has done that they end up tying themselves up in knots. Find your own path and experiment.

How did you decide how to publish your books?
I self-published because when I sent out queries to agents the response was always the same (when I got a response), “creative idea, but not interested.” It was six years ago during the height of the teen vampire craze, and it seemed like everyone was either looking for that type of book, or some type of “Chick Lit”. I also realized I wasn’t crazy about giving up control of my work. Self -pub really wasn’t an option until a few years later, but when it really started rolling, I was intrigued that I could be in control and in charge of my (hopeful) success.

What do you think about the future of book publishing?
I think it is a whole new world and changes day-to-day. I have no idea how it will progress, but I think more and more of those middle tier authors who aren’t getting the necessary love from their publisher will continue to move to self-publishing. I picture the big publishers cutting their options to only the big sellers. But what the heck do I know? Not much.

What genres do you write?
Mystery, Action & Adventure