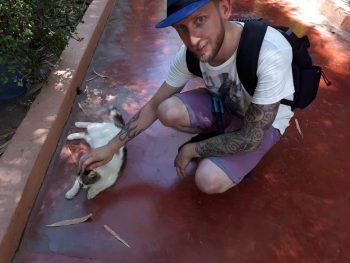 A chequered childhood with less than perfect parents and absence from schooling, combined with being diagnosed at a young age as dyslexic and spending his teen years living in a squat in Boscombe, should have meant that a career in writing seemed far-fetched.

However, Damien found comfort in escapism and used writing to escape his own demons, leading to his first novel, "A Winter's Child", gaining some accolades in 2004. This was followed up with "Dragon's Blight" in 2013 and saw this dyslexic author carry out his first book signing in Blue Town, Kent. Achieving 6th in Amazon's Best Sellers in August 2020.

What inspires you to write?
For me writing started to deal with the emotional hardships I was facing. I was torn between the life I had seen as a child, of violence, self-harm, and lies. I started writing when I ended up feeling very alone in the world while squatting after my family fell apart. I was unsure who I was, and who I wanted to be, or even how to be that person. I had met a friend, Emily, who suggested I try writing down what I was going through as a way of processing it. That was impossible for me, it was just too raw, to painful. So, I started making an elf go through some of it, that way I could process it, but it wasn’t really me, nor any real person. The elf would experience it, and through him, I could see how he survived it, and eventually came out the other side. Coming from this first short story, almost like the fireworks that start my first novel Dragon’s Blight, a world suddenly bloomed into existence in my mind. It was like carrying around the lives of a million people, and I just needed to get it down and on paper. Now we are four published books in, with many more that haven’t seen the light of day yet. I’m in a good place in my life now, blessed most days to be honest. Yet Oakenfall has stayed with me, and I enjoy visiting it and sharing the stories from within my mind.

What authors do you read when you aren’t writing?
The obvious ones like Tolkien, and Pratchett are up there. I also enjoyed the works of Dean Koontz, Stephen King and other Thriller writers. I enjoy a wide variety of stories, but my heart will always belong to fantasy. If it’s got a potbellied dwarf, a sneaky rouge, and a torn hero… I’m there. Most recently started the journey of the Fatemarked by David Estes I’m only a chapter or two in so far so its too early to form an opinion, but its started off well. I’ll give most things a go as you never know what you’re going to experience. I once brought a book ‘Fifteen North of Hook’ by N.E.Buettel from a second hand store and found a five leaf clover pressed between its pages. So there really can be magic in any book.

Tell us about your writing process.
I think my process differs from book to book. I have a rough idea of a story. I might make bullet points of the plot. But honestly, that normally goes out of the window, and I end up going on the adventure with the characters. Things happen that I’d never expect, the characters react how I wouldn’t have assumed they could. There is one of the books where a character dies rather suddenly, and I am sure readers won’t see it coming, I know I didn’t when I was writing it. I had to close the laptop, stare off into space and wonder what the hell just happened. I do have notepads full of potential ideas, side stories and maps, some of it will make it into the books. Most of it was just for my own enjoyment. I had never written the books with the plan to sell them, or even dared think that people would enjoy them. I just take pleasure in going on the escapades with them, they’re like old friends, and I love seeing how their lives develop.

For Fiction Writers: Do you listen (or talk to) to your characters?
I do talk to them, there’s one instance that springs to mind actually. I was at a low point in my life. I was walking back to the place I was staying. It was cold, wet and I was feeling really depressed and alone. I won’t lie, the thought of just stepping out into the traffic had passed through my mind. But Diadan, popped up. He’d been through worse. He’d seen worse things and had made it through it. I won’t give the story away in case people haven’t read it yet, but he said to me ‘If he could get through that, then I could cope with what was going on.’ It’s not like hearing voices, I’m not ‘that kind’ of crazy, but I do aspire to have some of the characteristics of some of the people in Oakenfall. There are times where I am facing something challenging, or overwhelming and often think… what would Fintan do etc. It sounds crazy, and maybe it is a little! But I don’t think I could write like I do, without the characters being real. I don’t follow some strategy to write books that will be easy to market like some authors. I write books that tell the stories of the voices in my head.

What advice would you give other writers?
Just to be careful, with social media being what it is. There are thousands of people ‘faking it’ until they make it and don’t let people posting huge sales figures make you feel less worthy. Not all of them are telling the truth and even those that are, might be on a different journey than you are. Some writers churn out book after book, cloning other stories to sell because they want to write to sell. I don’t personally agree with that method, but there can be success to be made that way. Other authors will release one or two books at most a year, as they had a story to tell. Whatever approach you decide to take, write for you, write what you enjoy, and find the people who enjoy your stories. My biggest warning for anyone just starting out is to watch out for people trying to make money of the unaware. Between would-be editors, marketing specialists, and vanity publishers. It really is a minefield and approach it carefully and with your eyes open and a tight hand on your coin pouch!

How did you decide how to publish your books?
I first decided to try getting my books published because someone told me I couldn’t. I am dyslexic (which by the way is a bloody hard word to write when you have it) and shouldn’t follow that path. I was told at school by a teacher that I should aim to work in a factory or something with my hands as that would be more suited to me. I loved proving people wrong and continue to challenge myself personally and professionally. Once I’d had the first story published, people started to enjoy my work. My source of inspiration then changed, rather than proving someone wrong from my past, who in all honesty probably forgot I even existed in the 20 years or so that passed after their comments left their mark, my continued inspiration came from people asking about my writing. Enjoying the stories and asking questions about what happened to certain characters.

What do you think about the future of book publishing?
To be honest, I do worry about the future of book publishing. We live in a time where more people than ever have the opportunity to get their work published which is incredible. However, with AI out there now that can write, rinse and repeat stories, combining this with some authors churning out forty or so books a year just to make money, and not caring about the quality. It really could damage the experience of readers and they might shy away from buying books altogether. I hope that doesn’t happen, but it is something that worries me.

What genres do you write?: Epic Dark Fantasy