You are here: Home / *Reading Room / Interviews With Authors / Interview with Author – Craig A. Price 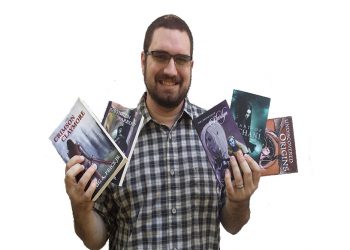 About Craig A. Price:
Craig A. Price Jr. is a USA Today Bestselling Author. His novel, The Crimson Claymore, an Epic Fantasy Adventure novel that has garnered millions of reads, was featured in fantasy, had more than 17,000 votes, and more than 1,000 comments/reviews on the social networking platform for readers and writers, Wattpad.

What inspires you to write?
I find inspiration in a lot of things. When I was in the first grade, my teacher made books with lined paper and construction paper and told us to write a book. Ever since then, I've found inspiration everywhere. I knew then that I wanted to tell stories.

Some of my greatest inspirations are the beauties of the earth. Nature is a wonderful thing. I love being outside and visiting mountains, trails, and any other type of gorgeous scenery. It sparks my imagination and I want to incorporate it into my writing.

What authors do you read when you aren’t writing?
Jeffrey Collyer is my favorite author. He's an Indie, and not many people know of him, but his books full immerse me and I can't wait for his next book.

Tell us about your writing process.
I've done both. One year for NaNoWriMo, I wrote an entire novel without an outline. Most of the time, I have some sort of outline, if at least only a paragraph per chapter.

Now, I organize a bit better. I found an application for Mac and iOS called StoryPlanner. You can outline your scenes, including what characters are in your scenes and the location of the scene. Then it has detail character sketches and location profiles. I never used to go in this much depth before starting a project, and I'm still not nailing down all the details, but I'm feeling the story really develop in my mind more than ever before in the outlining process, and it's making my actual writing better and faster.

For Fiction Writers: Do you listen (or talk to) to your characters?
I listen to their desires, then I ignore them and put them in uncomfortable situations. It's those uncomfortable situations where the characters either sink or swim. Sometimes they derail and go their own path, and that's all right. Many misconceptions about outlining are you have to stick to it. But that's not the case. I'll quote the great movie Pirates of the Caribbean.

"And thirdly, the code is more what you'd call "guidelines" than actual rules."

What advice would you give other writers?
Don't give up. Ever. Writing gets tough at times. My first novel, The Crimson Claymore, I started when I was in Junior High. Then I put it down, and went back to it when I was an adult. Even when I was an adult, I spent over seven years getting that first book right. I had a lot to learn. There was a lot of writing and rewriting. It was hard. It was a lot of work. But after you finish your first book, it gets easier.

Writing is like riding a bicycle. In the beginning, you'll fall off a few times, you'll scratch your knee. You'll get hurt. Then when you finally figure it out, you'll have spectators come to you, pointing, and coitizing your form because they think they're experts because they watched Lance Armstrong once. It'll hurt. But all you can do is try to learn something from them to make you better, then push them out of your mind and move on. And as you continue to do it, it gets easier and easier, you get better and better, and you get faster and faster.

How did you decide how to publish your books?
When I wrote my first novel, The Crimson Claymore, I sat on it unfinished for a long time. It was almost finished, but not quite. Then I had posted it on Wattpad, where it was found by an admin. She told me to finish it, get a cover, and she loved it so much she wanted to make it one of the first featured novels on the website.

Well, I got to work. I finished the book, and she found a cover person for me.

Then it was featured. And wow, it went great. I ended up receiving over 2 million reads, over 10k votes, and over 1k reviews on it. During that time, I received critiques from people, and I used that to make my book better. Then I started agent shopping. I had a fanbase, I had readers, and I was featured on Wattpad. Well, none of that mattered to agents. After receiving hundreds of rejections over the next 4 years, I finally started learning about Indie Publishing. I learned as much as I could, and got to work. I published The Crimson Claymore late in 2015 and haven't looked back. I am still wanting to explore publishers, but I'm not fretting over it. I do have one trilogy with a small Indie publisher and a co-author. And I'm gearing up to join another small publisher. I'm hybrid now sorta, and I'm loving it.

What do you think about the future of book publishing?
Paper will never die, but eBooks getting getting more and more popular. And it will continue to do so. As kids grow up, especially teens, who have phones with screens, and applications like Wattpad where they can read free amateur stories, they will make the transition to eReaders rather seamlessly. Yes, there will still be people who like a paperback, but as the years go by it will get less and less. Electronic Books and Audio Books will be the future. It will depend on a person's learning style, and their busyness and required travel to what their preferred format will be.

What genres do you write?: Fantasy, Sci-Fi