You are here: Home / Interviews With Authors / Interview with Author – Courtney P. Hunter 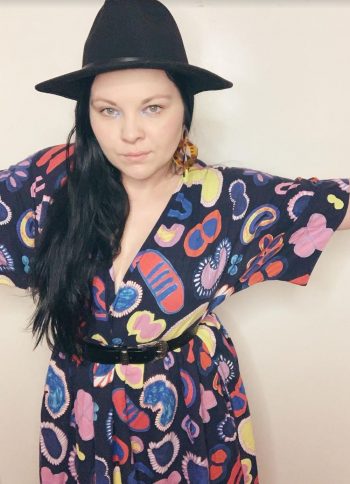 About Courtney P. Hunter:
Courtney Hunter is a serial creator from Philadelphia, PA with experience in writing, the fashion industry, and live performance. After eighteen years of studying contemporary dance, she set out to carve herself a path in fashion and retail buying. Upon graduating from Philadelphia University and settling into her career, she turned back to dance. While working as a retail buyer for Burlington Stores, Courtney began producing contemporary dance and burlesque performances under her production company Stolen Fire Collective, aptly named after Prometheus, the fire-stealing god. Sentience, her debut Science Fiction novel, is a written extension of a contemporary dance piece that was produced for the Philadelphia Fringe Festival in 2017 based on artificial intelligence.

A lifelong Sci-Fi fan (her favorite movie as a little girl was and still is Jurassic Park), Courtney loves anything Promethean in nature, and her favorite books, movies, and television shows are the ones that challenge the ethics of the future that we are rapidly heading towards. Some of her favorites include Jurassic Park (obviously), The 100, The OA, Westworld, The East, and Ex Machina.

She still resides in Philadelphia with her partner, Will, and her rescue pups, Rickie, Billie, and Reggie. In her free time, she records a podcast called The Sentience Podcast, which started as a behind the scenes look at the making of her novel and has evolved into an auditory hub for all things science fiction, creative process, true crime, and the occult.

Sentience was released Friday, October 30, 2020, three years to the date after Courtney first started writing it.

What inspires you to write?
I've always told stories and created characters in my head to entertain myself since I was a kid – during car rides, long baths, or stretches of boredom. It took me until I was around twenty-three to realize that I had a well-developed lineup of characters and story lines from all the years spent thinking.

At the same time, I've also been a dancer for the majority of my life, so I've found that there's lots of story-telling within dance, too. At twenty-three, I choreographed my first contemporary dance piece about artificial intelligence. When I was done, I felt like the world I created on the stage was the perfect backdrop to the characters and story lines rattling around in my head. I put the two together and that's how my first book, Sentience, got started.

I didn't grow up knowing I wanted to be a writer, it more so just felt like the next step in my evolution as a creator. Now that I have my first novel under my belt, I am itching to write another. I spent so much time working on Sentience without realizing it, so this time around, I'm just drawing a lot of inspiration from personal experience. This way my writing feels just as authentic even though I didn't spend years subconsciously creating the characters.

What authors do you read when you aren’t writing?
I don't really have one specific favorite, I'm always fixated on whatever I am reading.

I've lately been reading the complete works of the late war journalist Marie Colvin, which I absolutely LOVE. Her writing is harrowing.

I always enjoy how Michael Crichton can take something so academically dense and make it read like a movie. I'm also very jealous of his prolific career.

Tell us about your writing process.
I like to get lost in my writing. When I wrote Sentience, I just let my mind run wild. During edits was when I really chiseled away to get the final story, and there was tons of extra content that didn't make the cut.

I tried starting to write the sequel to Sentience, and I was much more calculated with it. I had every kind of outline you could imagine. To be honest, I find that so much less fun, and ended up needing to step away from it for my sanity.

I really like letting the characters inform me where they want to go, and I think that in order to be able to do that, it's really important to have strong characters. With Sentience, I developed my characters by accident before I knew the story. I've since pivoted to work on a stand alone instead of a sequel for now and its so hard to recreate the experience that I had with Sentience, because I had unknowingly thought about it for so long.

But as I start to put words on paper for my newest story, I've really tried to remind myself how much fun I had getting lost in the story.

For Fiction Writers: Do you listen (or talk to) to your characters?
I kind of pretend to be them, which is probably even weirder than listening to them or talking to them.

I've always wanted to be an actor, so for me this action kind of feels like acting, if that makes sense.

But when I am actually writing, I always let them act the way that they would really act. That might technically count as listening to them 🙂

What advice would you give other writers?
JUST DO IT.

Get started and don't look back.

How did you decide how to publish your books?
Well, I wasn't really sure at first and ended up starting to take the traditional route. I queried agents and received a few requests for a full manuscript, but when I realized how long it took, I just was simply too impatient.

I ended up self-publishing because I knew that Sentience was ready for the world as I wanted it to be. Since it was my first, I wanted full control over what it was and ultimately, by self-publishing, I got that.

In the future, now that I have quelled my impatience, I definitely plan to pursue the traditional publishing route much harder.

What do you think about the future of book publishing?
This is a tough one. As someone who kind of fell into writing, I hardly feel like an expert on the industry. I think traditional and self-publishing both have their merits, and truthfully, I don't think either are going anywhere. Each are equally tough to break into, and I was honestly surprised to find that there's this sort of stigma around self-published authors. It's honestly more challenging to get your work out there than I thought because so many others have tried to do so without respecting the rules of the platforms they shared upon.

Ultimately, what I'm getting at is that for a writer, regardless of which route you choose, it's a long and tough road. BUT – it's very worth it once your book is in the hands of a reader regardless of how it got there.

What genres do you write?: Science Fiction, Speculative Fiction