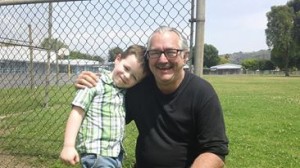 Author Bio:
Cliff Ashpaugh grew up in the wilds of the 1970’s San Gabriel Valley, dodging bullets while driving around in his 1964 Pontiac low-rider. Since then, he’s progressed from low-riders to motorcycles to airplanes to scuba diving to sailboats. You can usually find him today stretched out on the deck of his thirty-two foot blue-water sailing cruiser that he calls home, flinging a bottle of Martell XO Supreme around for all to partake.

After performing his patriotic duty for six years in the Air Force, where he worked on nuclear minuteman missile silos in South Dakota, Cliff returned to Southern California and school in the early eighties. He soon suspected he had a gift for writing after flunking his first attempt at Freshman Composition. Since then, he’s won a few literary awards, including five in the last year, has published in magazines, has organized and moderated writing critic groups, and has participated as a guest speaker at literary events.

What inspires you to write?
I read voraciously, everything, but what I like reading the most is a story that moves me so that’s what I strive for in my writing. After completing the current version of Josh’s Wall, I sent several advanced reading copies out to people. One person contacted me to say he couldn’t sleep the night before so he grabbed my book, but instead of helping him go to sleep he couldn’t put the book down and stayed up all night, and he had just finished reading the story. I joked with him and said he’d just stayed up all night reading a story about a boy who was staying up all night reading a story about a boy. Another person who finished reading the book the night before called me one morning and started asking me questions. I told her none of the questions she was asking were in the book. She said “Oh my God, I dreamed about the book after I went to sleep and I’m asking you questions about my dream.” Another person who reads a dozen or more novels a month contacted me and said my story was the best he’d read in a long, long time. And then when the magazine Forward Reviews notifies you that they loved the story and are going to feature your book in their fall publication, that’s what inspires me to write.
Those golden moments.

Tell us about your writing process.
Yes, to all the questions. I begin with a premise and then start outlining in my head until the story forms into a beginning, middle and end with two key plot points in between. I’ve never committed my outlines to paper because the outline should be as dynamic as the characters in the story, not permanent or stagnant. The term organic writing is preferred over seat of the pants writing. An outline exists, just not on paper. The writing begins by picking a scene and rewriting the same scene in the different characters close-point-of-views. Then I do the same with another scene and another until I have a feel for all of the characters in the book. Writing character sketches outside of a scene is very boring, at least for me, and the upside is that I usually have some very good scenes written that can usually be placed into the story once the first draft is started. My first draft becomes my written outline for my second draft. My second draft becomes my written outline for my third and on and on until completion.

For Fiction Writers: Do you listen (or talk to) to your characters?
There is nothing more exciting while writing a story than for characters to become dynamic while taking on lives of their own. In a novel this often leads to subplots, but in a novella such as Josh’s Wall it leads to additional threads that add depth to the story. For instance, I added a character about a third into the novel and wrote a scene with him as a joke to a friend who was reading my chapters as I was writing them. It explains how this character came about on my website cliffashpaugh.com in a video that starts with the description, “I had a great time.” The joke backfired because my friend made me promise to leave the chapter in the book, and over several drafts he grew into a dynamic character that added not only depth but a soaring quality to the story line, a feel that there is something larger in this life than just us. Once he became a real person I stepped aside and tried not to interfere with his story.

What advice would you give other writers?
If you’re meant to write then you can’t quit. I know because out of frustration I’ve tried, several times. Yet, every time I’ve returned to writing it was with the realization that all I’d accomplished was to delay my growth. Keep writing. Keep growing. It takes an average of a million serious words to gain a voice. That’s a hundred words a day for ten thousand days, five hundred words a day for two thousand days, or a thousand words a day for a thousand days. That’s just to gain a voice, and then there is still craft and talent to take into consideration. Craft can be learned. The level of talent might whittle those million words down to five hundred thousand, or extend them to two or even ten million. When I started writing thirty years ago I’d read a story I liked and say, “I wish I could write like that.” Now I say, “I wish I had written that.”

How did you decide how to publish your books?
I finished writing Josh’s Wall a dozen years ago. At the San Diego Writer’s Convention, an agent agreed to take the story on. She found a publisher who purchased the story. It was a nightmarish experience. The publisher moved the date of publication back six months, then another six months, and then became insolvent before the story went to publication. I decided I didn’t need those kinds of frustrations in my life and gave up the idea of publishing a novel, though I continued to write and publish an occasion a short story or magazine article. Four years ago, based on an incident I had with a French sailboat owner who wanted to go out and experience storms, I started on a magazine article to warn neophytes against taking on such adventures. That article grew into a non-fiction book in my head while I was working on it. So I started writing the book about the experience, but while working on the book that story grew into a fiction novel in my head. I returned to college to work on my novel writing craft when I mentioned the earlier novella to one of my professors. After reading it, he got back to me and said the story had to get published. I figured yeah, right. Who would publish a novella in this climate? Turns out his wife owned a publishing company, Spout Hill Press, and they specialized in novellas. He and his wife showed up on my doorstep one day and made an offer. It’s been a wonderful experience. We’ve done more work on the story and changed the title and now it’s ready for publication six months earlier than we’d originally anticipated. I have a friend who has a novel ready for publication. His publisher has moved him back six months three times now. He is very frustrated. I know what he’s going through and feel for him, and hope it ends up better for him than it did for me twelve years ago. All I can say is without John and Ann at Spout Hill Press, I probably wouldn’t have ever published a novel.

What do you think about the future of book publishing?
I believe the novella will be returning to its previous acceptance as a pedigreed art form. It’s still a popular form in most European countries, and only lost its popularity here because the predominant publishing companies changed their business models. Life just wouldn’t be the same without A Christmas Carol by Dickens, Of Mice and Men by Steinbeck, The Old Man and the Sea by Hemingway, even a good case can be made that The Catcher in the Rye by Salinger is a novella, not to mention the 2010 Pulitzer Prize Winner Paul Harding novella titled Tinkers. Beyond that, who knows?

What genres do you write?
Literary, Thriller, YA