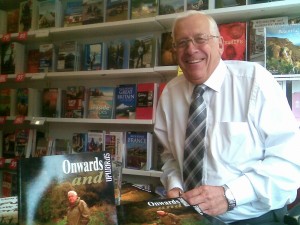 Author Bio:
Author Chris R. Pownall, who now resides in Nottinghamshire England, was born in 1943 in the rural Cheshire village of Bosley.

Chris failed his 11+ examination and received a secondary modern school education, leaving full time education at 15 years of age, with no academic qualifications to his name. He managed to secure an engineering apprenticeship at a nearby mill and attended Macclesfield College of further education, studying mechanical engineering until the age of 22 years.

Upon completion of his education and apprenticeship, Chris was promoted to the drawing office, but after 18 months in this responsible job, he decided it was time to move on.

In 1967, he joined the Merchant Navy, serving with the famous Blue Funnel Line, as an Assistant Engineering Officer. Whilst this was exciting and adventurous, Chris decided a life at sea was not for him, so following his initial training and one voyage to the Far East, he called it a day.

To further his engineering knowledge, he obtained employment as a design draughtsman, working for an engineering manufacturing company, and eighteen months later, he was employed by James Walker & Co Ltd, which marked the beginning of a forty year career in technical sales.

Chris progressed within the James Walker organisation, in a succession of sales management roles, finishing as an Industry Marketing Director, specialising in high performance sealing technology, within the global Metallurgical Industries. This role was to take him on many overseas travels, and in the last two years of his employment, he focused upon writing strategic market plans for some existing, plus new sales territories.

Although Chris has a loving wife Pat, retirement didn’t come easy, and after a few months, he was missing the demands of his occupation, with the days seeming endless.

He decided to take up writing and to date he has published six books, with a possibility of more on the way. Writing has provided Chris with a retirement interest, as well as a major challenge, giving him great satisfaction, when a difficult project is finally completed.

Chris has a long standing reputation for being there when things go wrong and there are many examples of this in his three autobiographical books. He has encountered freak weather in faraway places and some of his working colleagues were reluctant to travel with him, knowing that something unpleasant was more likely to occur if he was around. Earthquakes and tornedoes in China to ice storms in the USA are among Chris’ encounters with Mother Nature.

Humour has always played an important part in Chris’ life, which manifests itself in his written work. He has witnessed many amusing situations throughout seven decades of life and he has appreciated the humorous side of everyday living.

As in most people’s lives, Chris and Pat have had their share of sadness, when at the age of eighteen, their son Robert, suffered a near fatal head injury. This was a life changing situation, which required great courage and determination on the part of their son Robert as well as unrelenting support from their Daughter Tracey, for Robert to regain his life after this tragic event.

What inspires you to write?
I enjoy the challenge that writing provides. It keeps me occupied during my retirement and fulfils an innate need to be busy.
I also appreciate the skills involved in structuring a literary work, and whilst I accept my limitations in this regard, I try to improve and we are never too old to learn.

Tell us about your writing process.
Having formulated a basic idea, I set out a structure having a beginning and end. I then outline the content within these parameters, building a framework into which the details the details will evolve.

For Fiction Writers: Do you listen (or talk to) to your characters?
I find writing fiction a most demanding discipline, and sometimes I find it extremely frustrating. I do identify with the characters within the narrative, hopefully, presenting them with individuality, plus, a personality specific to the plot.

What advice would you give other writers?
You have to have determination to write a book. I see it like climbing a mountain, and as you ascend, you face many problems along the way. Some days, its a hopeless task, and I find the best action is to take a break and focus the mind on something totally unrelated to the writing process.

This works for me and I return to the challenge of climbing further, with renewed vigour.

My advice is to take your time, and steadily build a little at a time. Rome wasn’t built in day, so be patient, and if like me you reach a stage in the manuscript where you are unhappy with the content, don’t delete anything, take a copy and work at editing that until you are once again satisfied with the work, and then start climbing again.

How did you decide how to publish your books?
My first four books were published by a subsidy publisher, where I paid a few hundred pounds for formatting, editing, cover design, marketing etc.

Latterly, I prefer to self publish using the CreateSpace Publishing Platform. This enables me to do everything myself throughout the publishing process and it doesn’t cost me a single penny.

What do you think about the future of book publishing?
I’m convinced that Indie publishing is here to stay, which is great because it enables anyone with ambition to write to guarantee getting their work in print, and in digital format.