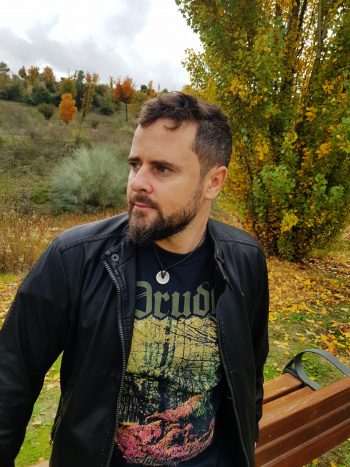 About CF WELBURN:
Craig Farndale Welburn is an award-winning author for his series: The Ashen Levels.

He was born in the year of Star Wars, in the birth town of Charles Darwin, and caught the fantasy bug as a child at the top of a faraway tree, in a hole in the ground and through a snowy wardrobe.

He left Shropshire to study literature, travel the lands and seek his fortune.
(He’s still seeking…)

He currently lives in Madrid with his wife Jessica and son Otis.

What inspires you to write?
The love of a good story… Both the ones I fondly remember being read as a child, and the ones that won't let my mind rest until I've written them!

Tell us about your writing process.
There's always a plotter vs panster debate, but my process seems to be a mixture of the two… First draft I'm more or less along for the ride, using an initial idea and running with it. The second draft is when a lot more world building/backstory gets added, then the third-to-fifth? drafts strip away until it's as lean as I can make it!

For Fiction Writers: Do you listen (or talk to) to your characters?
I suppose rather than having an actual conversation with a character, I might mumble some of their lines of dialogue when editing, or out walking…. That's usually the point when people will run away from me. (Walking is when I do my best brainstorming and do battle with tricky plot points.)

What advice would you give other writers?
Keep going, you've got this!!

Oh, and invest in a decent chair! I learnt that the hard way…

How did you decide how to publish your books?
I attended a writing workshop, way back in 2012, I think it was. I heard some compelling arguments for self-publishing and taking the indie route. I liked the idea of having complete control, and decided to go in that direction. It's not always easy, but the indie community is thriving and I'm proud to be a part of it!

What do you think about the future of book publishing?
The swing towards ebooks and especially audiobooks is massive. I know lots of people who simply don't have time to read, but will listen to an audiobook in the car, or whilst walking. With so many things vying for our attention these days, it's good to give readers as many options as possible.

What genres do you write?: Fantasy (epic and dark)