You are here: Home / Interviews With Authors / Interview with Author – Carol McKibben @CarolMcKibben 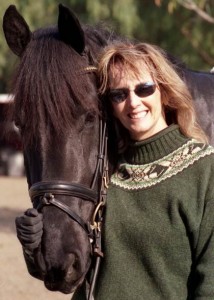 Author Bio:
Carol writes from the heart of a dog’s eyes. Often telling her stories to Labradoodles, Basset Hounds and any stray that happens by, it wasn’t long before people stopped to have a listen as well. Now Carol writes for people and speaks to large audiences, dogs included.

Carol McKibben has been a principal of McKibben Consulting since 1991 and provides quality writing, editing, marketing and PR services for her clients. She has 30+ years of experience in publishing, marketing, public relations, business management, education and project management. Noted for her marketing and highly-
organized management skills in business, in 1997, she co-founded and was president of McKibben Communications, LLC, one of the Inc. 500 Fastest Growing Companies for three consecutive years until it was sold in 2001. Previous to McKibben Communications, Carol was Vice-President and Publisher at Miramar Communications, a Los Angeles-based company specializing in trade publications. Carol re-joined the publishing world in 2004 where she co-founded and was president of Azina Communications, publishers of Dream Spaces Home Design Sourcebooks and a companion Web site.

In 2008, Carol began a career in freelance writing and editing under the McKibben Consulting umbrella. As well as working with authors to create book proposals and content outlines, she has edited numerous books.

What inspires you to write?
For Riding Through It, I wanted to share what I had learned with others.

For Luke’s Tale, my blind Labrador retriever, Luke, was my inspiration. Dogs have such unconditional love for us … and my question is simply, if dogs can love us unconditionally, why can’t we love each other in the same way? I wanted the narrator of the story to be from that perspective of loving unconditionally. And, I really felt a spiritual influence for this book. After I first began it, a psychic that I had never met told me: “The spirit guides around you are urging you to write the book you’ve started on unconditional love.” I was so shocked by what she told me. There was no way she could have known about it. I kept having dreams about the book and its content. Take what you will from this. I am humbled by the fact that I felt divinely guided. If it has meaning to just one person, I will have achieved my purpose.

Believe it or not, unconditional love is the underlying theme for the Snow Blood series. It’s told from a dog’s perspective. No matter his circumstances, Snow Blood ultimately is loyal and devoted. And oddly enough, so are the vampires in the series. They represent a microcosm of beings capable of loving and protecting each other. It makes quite a statement about man’s inability to perfect it, doesn’t it?

Tell us about your writing process.
With Riding Through It, I wrote a draft, gave it to an editor, got her feedback and threw it in the trash. I started over and probably wrote 6 drafts.
I was very fortunate with Luke’s Tale. I met Lonnie Ostrow, Barbara Taylor Bradford’s editor/marketer. He loved the premise and agreed to edit it. I think after the first draft we did 3 rounds. Then, after my Beta Readers gave me feedback I revised one more time.

Lonnie worked with me on Snow Blood as well. We did three rounds and then after the Beta Readers weighed in, I did one more edit. Hey from 6 on the first to 4 on the next two … I’m getting better!

What advice would you give other writers?
Don’t approach writing from the point-of-view that you are going to have a best-seller and get rich and famous. You might be one of the few lucky ones who accomplishes that. Rather, write because you must. Write because you have stories or information to share. Let the passion for what you write shine through your work. If you do so, you won’t be disappointed at the outcome.

How did you decide how to publish your books?
The experience with Outskirts was good. They held up their end of the bargain. But I just didn’t have all the time I needed to do soooo much marketing! When Troll River offered to take me on, I was more than pleased. Yes, it’s like self-publishing, except Troll River does A LOT of marketing for its authors. I get a lot of help getting the book “out there” to readers. Troll River doesn’t just put you on all the outlets and then tell you, “if you want us to market you, that will be $XXXX please.” Troll River takes what it does out of its commission. And TRP has done a lot for me. So, rather than being self-published, I think I am “boutique published.” A bit of a difference.

What do you think about the future of book publishing?
It’s an interesting place right now…don’t count out all the options just yet.

What genres do you write?
Coming of Age, Memoirs, Paranormal, Drama