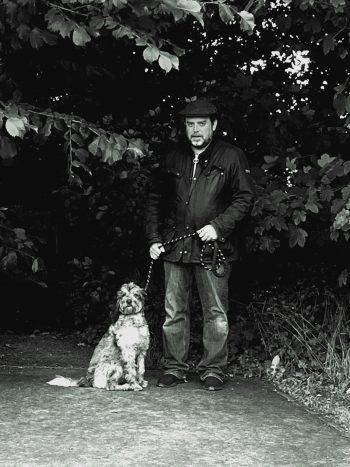 About C A Deegan:
I live in the East Midlands, right in the centre of the UK, and when I'm not writing or working, I'm with the family or walking the dog in the local woodlands seeking those ever-elusive Fae. Or sitting, pint in hand with the good friends I grew up with. Some of them are hidden in the books themselves; quite a few characters are based on the people I know and love.

And so, to the Cracklocks… "The Cracklock Saga" series of books came about from reading some pretty awful fairy books to my daughter over the years – she's in her teens now and has (with more than a little relief, I have to say) left those behind. But as I read those books with gritted teeth I always wondered what would happen if someone didn't like fairies, what they would do about it, and could anybody stop them? This idea grew, and the Cracklocks were born. I liked the idea of people who hated the Fae and everything they stood for. And who knew just how wicked those people were? I certainly didn't until Anastasia and Agatha got their claws into me!

The Cracklock Saga is my first series, and I have huge plans for it. The shadowy Tobias is begging for his tale to be told, and this will be forthcoming. Plus, I want to know more about Fermerillion, Dorcas and the rest of the good guys – where did they come from? And what really happened between Elsie and Malchiah all those years ago? I think I know, but they all have a habit of surprising me when I'm scribbling. More than you will ever know.

What inspires you to write?
I’ve always read, and have been lucky enough to be selected to beta read for a few authors; going over their works before they publish as an extra set of eyes. That’s really what made me start to wonder if I could do it. Then, in early 2019 I met one of my favourite authors, Ricky Fleet (he writes horror, and he’s damn good!) at Comicon. We’d never met before; always corresponded though and it was great to meet him in person. It was something he said when I floated the idea of perhaps writing one myself. “If you don’t have a go, you’ll never know.” I’d had the idea for the Cracklocks in all but name for a number of years, so I dipped my toe in with a couple of shorts that were relatively well received.

It was in May 2019 that I started tentatively drafting the story arc. Then tried to write. It was like ‘the little engine who could’ to be honest. Took a while to get into the swing of it, but I am so pleased I did, because now I can’t stop!

What authors do you read when you aren’t writing?
I am a lifelong Stephen King fan, and the richness of his worldbuilding and descriptions are fantastic; I try to emulate these. Then throw in a pinch of humour such as the great Sir Terry Pratchett’s and that’s what I strive to achieve. I haven’t quite made it yet (in my opinion; others seem to like it!) but I’m getting there. Anthony Horowitz, Rick Riordan and the author of a certain boy wizard are also on my list. They are the masters at what they do.

Tell us about your writing process.
I would love to be a plotter, I really would. I do plot. And then it all goes crazy when I’m writing, and I become a total pantser. It’s like they have their own ideas and I am but a passenger. I have the story sketched out, and I usually have a rough draft of the last chapter as notes. Everything then points towards that as the story progresses, but it often has to be tweaked as new ideas come in. I do edit as I go along; I know that people say not to, but its what works for the individual, and that's what works for me. Do what's best for you!

I get my best ideas when I am out walking the dog and have to dictate them into my phone; really helps if you have a little block to get over. But I do get some funny looks from other walkers! I adapt the story as the characters do their thing; that’s what editing is for after all. I had it in Book 4 that necessitated a whole chapter rewrite. A lot of work, but I love it; what is a writer if not subject to their own muse? I try and set aside time each day to do a little on the story; 500 words minimum is my target. More is fine if I have the time, but no less.

When it comes to editing the final piece, this is the most important part of the story I think. I use Word as I am very familiar with it from the day job. My process goes draft, read through, redraft, third redraft and then run Grammarly to check it all. Then my wife reads it, then the editors get it, followed by my beta team. I then perform final edits. You can never have enough eyes look at your draft I believe. As I edit as I go along, its not too work intensive for my bits, but it is soooo important that you do this if you want a decent credible tale at the end.

For Fiction Writers: Do you listen (or talk to) to your characters?
Ha ha ha! I am so pleased that you asked. I listen to them to be honest; it's like they know how the story needs to go, and they do their thing whilst I try to wrestle it into the story. I think I understand them, and then…BOOM…complete curve ball. Would love to have a proper poke about in my own subconscious, but am scared of what I'd find there!

What advice would you give other writers?
The advice that I got – “If you don’t have a go, you’ll never know.” Just write! Have the confidence to do it, get it down and see what you've got. You'll look at it and think 'trash'. Every writer does. But don't stop. Fix the bits you don't like, and have another look. You'll think 'Yeah, this is alright.' Then you'll agonise about getting someone else to read it, but do that – a friend or family member and ask their opinion. But pick the right person; Great Aunt Elsie (blatant plug!) isn't going to want to read your erotic space romp, and your mates ten year old isn't the best target audience for your serial killer scribbles.

While you're doing all this writing and editing, try and stick a little bit of money away. Regardless of which way you go, you're going to have to think about more editing, and whether you do this yourself with willing beta readers, software or employ someone, it will cost a little, though there are ways of minimising it. This is all part of the journey, and I'm happy to share the good and bad decisions that I made if anybody wants to know!

Finally, don't worry too much about how you will publish at first. You need something good to publish after all. You will have a choice to make about this eventually – traditional publishing, self-publishing or a hybrid publisher. Those are journeys of their own.

Summing up, believe in yourself. Not everyone has the guts to do what you’re doing, although more people than you think would like to try it.

How did you decide how to publish your books?
I did query a few agents, but after a while, having read some good things about the self-publishing route, I settled on that way forwards. With publishers, they do help you massively I know, but unless you are lucky enough to be able to get in front on some of the bigger ones, you are going to have to do marketing yourself. And marketing is the key thing for books. All publishers will expect you to do some, so I thought about it and looked at the costs of doing it versus what you relinquish to go with a publisher. It made sense to me to go the self publishing route. But if you do go this way, learn everything you physically can about if before you do.

What do you think about the future of book publishing?
The world we live in is constantly changing, as is the book publishing business. There will always be a place for traditional book publishing, but the self-publishing route has really taken over by storm. I read somewhere that there are over 2700 books a DAY published in the US alone. So there is so much out there now. I believe that self-published books are every bit as good as the traditional ones, providing their authors take care to deliver a quality product. I think that both routes are around to stay for a long time. Hybrid publishers there will also always be a market for, for those people less confident about their route to publication. I did consider this route myself, but there is so much support out there now for self-publishers, it made sense to me to do a little learning and go that route. If I can do it, anyone can!

What genres do you write?: Science Fiction & Fantasy, Urban Fantasy