You are here: Home / Interviews With Authors / Interview with Author – Brandon Draga @BrandonDraga 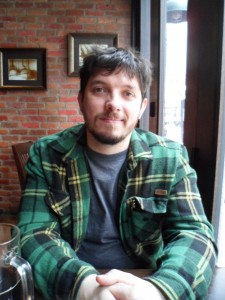 Author Bio:
Brandon Draga was born in 1986, just outside Toronto, Ontario. His love of all things fantasy began at an early age with games like The Legend of Zelda, Heroquest, and Dungeons and Dragons. This affinity for the arcane and archaic led to his studying history in university from 2005 to 2011. In late 2012, he began writing a D&D campaign setting that would lay the groundwork for the world of the Four Kingdoms. Brandon still lives just outside Toronto, and when he is not writing enjoys skateboarding, playing guitar, and playing tabletop games.

What inspires you to write?
What inspires me to write is the fact that I can put something on paper that came from my mind, and that thing could be read, and resonate with even one person. Having someone tell you that something you created moved them, spoke to them, is an incredible, indescribable feeling.

Tell us about your writing process.
My writing process is likely not one I would recommend, which is to say that it consists of sitting down and writing whatever I feel should come next. Many people, especially in fantasy, meticulously plan out their world, their plot, their characters. I prefer to let the story happen of its own accord, really just using me as a vessel through which it gets committed to writing.

For Fiction Writers: Do you listen (or talk to) to your characters?
I take something of an omniscient back-seat to my characters. I love writing dialogue, and sometimes it feels like my characters will say something, or interact in a way that will surprise even me!

What advice would you give other writers?
To paraphrase Jerry “Tycho” Holkins of Penny Arcade: the hardest part of writing a novel is telling yourself that you are writing a novel. Sitting down with the goal of writing a chapter, however, is a far less daunting task.

How did you decide how to publish your books?
Deciding on self-publishing was something I mulled over for weeks after editing the third draft of my first book. On the one hand, a traditional publisher could ostensibly offer better resources than what I had available. On the other hand, I felt like I had a strong story, and some solid IP that I wanted to be able to get to people on my terms. After some research, the potential that self-publishing offered me made it seem the better option.

What do you think about the future of book publishing?
I think it’s tough to say. I could go on some rant about how the internet is leveling the playing field in a huge way, allowing authors who self-publish to take a piece of the pie from the shadowy figures in the ivory tower, but in that same breath, I would be over the moon to see my books on the shelf at Indigo or Barnes and Noble, and I’d be lying if I said that I didn’t traditional publishers make that kind of availability easier.

What genres do you write?
Fantasy